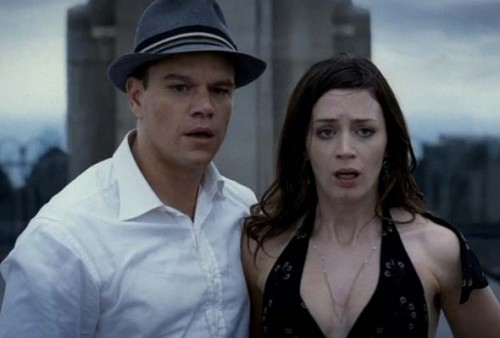 I went to go to see The Adjustment Bureau (2011, dir. George Nolfi) with the artist Kenneth Lo. We saw it at the mall. I got there a little early, and after buying our tickets I paced around this massive paper hammer advertisement for the movie Thor. I wanted it.

Ken arrived with a bottle of Laphroaig. We found seats and poured the whisky into waxed paper cups they had given us free water in. The whisky tasted like a slow-burning campfire. It melted the cups. We drank it and watched the movie.

Afterwards, we walked to Otis Lounge in Maiden Lane. We had gin martinis and nodded our heads to the hip-hop being played. We talked about the movie — very loudly. We strained to hear one another. We strained to hear even ourselves. The bar was Ken’s idea. We fortified ourselves with more alcohol, and hunkered down to tackle some themes from the movie: True Love, and the Almighty God. Heaven help us.

We began by puzzling out the cosmology presented in the movie. The Chairman in the movie seemed to most resemble the God of the Old Testament. This was a deity that could be bargained with, and whose mind could be changed. The Chairman has favorites, of which, David Norris (Matt Damon) is one. Everyone else in David’s word, including his family, are fodder to drive his narrative. Everything happens according to plan, and therefore has a reason, but there’s no sense of an afterlife. When an angel reveals to David that he is responsible for taking his family from him, he does so with a sense of guilt; there’s no suggestion that they’re in a better place.

We asked each other, what would we do if we were faced with the dilemma that Matt Damon was faced with? If we saw behind the curtain, would we think, am I schizophrenic? What would you do or think? Ken asked if I knew about the Kierkegaard thing where — like Abraham when asked to kill his son — you make the “leap of faith” in the face of an absurd situation. I sort of knew about it. I thought how it was funny the way the agents of the bureau were dressed and carried themselves like businessmen of the 1950s. Like pop culture can come out of the past to chase you around. I had the idea that The Adjustment Bureau was somewhat Satanic. In the sense that it tells the story of outstanding mortal beings who challenge the plans of the god-figure as a claim to becoming self-made. Ken pointed out that there were no demons in the film, only angels.

We talked about our love lives. David Norris sacrificed everything in pursuit of a woman he barely knew. He risked everything. When was the last time you felt that for someone? We tried to sort it out. Right then, the DJ played a song that went, “What we do for love …” We talked about times in our lives where we just laid it all out there for love, where we were willing to play the fool, but I don’t remember the details about it now, except that the topic made Ken drink a little bit more heavily, like a real Matt Damon kind of man would and should.

We thought that The Adjustment Bureau dramatized the crisis of conditioning. About how movies have taken the place of religion in the way they reassert cultural mores and values. This movie ended on a note encouraging audiences to choose their own destinies, and make their own plans. Essentially, to overturn and reevaluate the cultural values and mores they followed like a road laid before them. I noted how the religious sentiment in The Adjustment Bureau resembled the business structure of contemporary capitalism. The agents perpetrating all the action were “just following orders,” or “just following a (business) plan,” the reasoning behind which they had no idea. 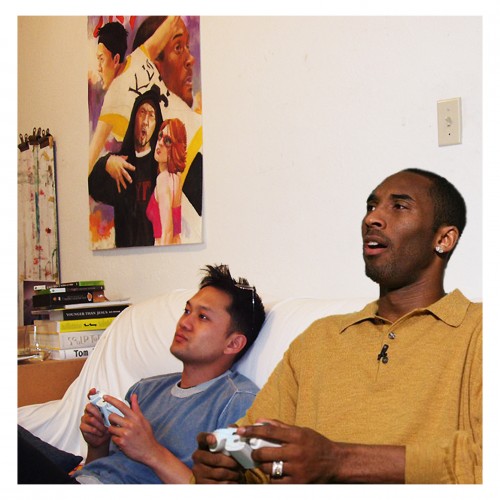 We talked about how the adjustment bureau was structured like an insurance company. I proposed the vague idea that insurance companies did something like “make adjustments.” Ken pointed out brilliantly that at the end of the film, as the skyline of Manhattan sweeps beneath Norris and Elise (Emily Blunt), the MetLife insurance building is front and center, as prominent as a signature on a painting.

At the bar, the DJ played Jay-Z’s “Change Clothes.” That was funny because I was trying to say how The Adjustment Bureau reminded me of the story of Jay-Z’s life. Because the story of David Norris, the poor orphan kid from a bad part of Brooklyn who ends up being a major political force, is more or less now “The Jay-Z Story” as far as our culture is concerned. Or should be. It would be important to point out that David Norris is white. And then the triangle was complete when Ken pointed out that the angel Harry (Anthony Mackie) played Tupac Shakur in Notorious. This triangle: Jay-Z, Tupac, Matt Damon’s character … was very satisfying.

I had never met Ken Lo before this. After all the religious talk, it was satisfying to learn that his name in Hebrew literally means “Yes No” and he is appropriately a Gemini. My name means nothing and I’m a Cancer.