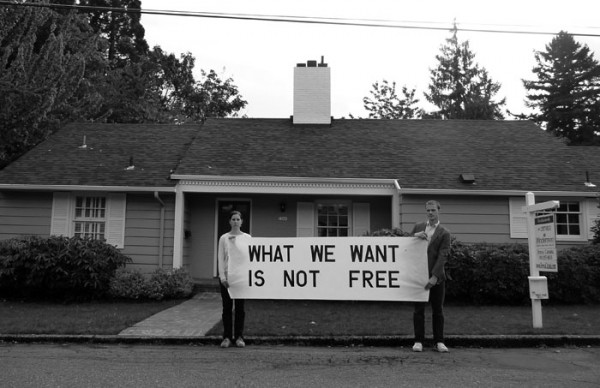 Out from Behind the Shadow
It was obvious from the discussion Thursday night that Shadowshop is many things to many people. Artists who have contributed seem to have mixed feelings about their relationship to SFMOMA and the project. Artist Amanda Hughen started by talking about her process of trying to figure out what made the most sense for her to contribute, and the labor exchanges that took place when she invited others to fabricate work for her. Megan Brian, education and public programs coordinator at SFMOMA, walked us through the logistics of making the project happen at the museum, navigating the bureaucracy to find loopholes necessary to simply allow art to be purchased in the galleries. Independent curator Christian Frock offered some context for Shadowshop in the form of a survey of works produced with some level of autonomy, and apart from traditional forms of support. One woman identified herself as a customer of Shadowshop, and it was both illuminating and disheartening to hear her praise the items which she felt made perfect Christmas presents while she disapproved of the objects whose conceptual content took precedence over their material appeal. I myself was torn as to how to respond to the invitation to contribute to the shop. In the end I included publications (ephemera from public projects) and work coproduced with Amber Cady as Alula Editions. I chose not to make new work specifically for the project.

Issues of sustainability, autonomy, and transparency surfaced several times during the conversation. Does Shadowshop offer a model of autonomy to artists, and is this the point of the project? We all have to make money, and it is safe to say that in San Francisco this is a more serious concern for artists than it is for others in many other fields. Some artists work full-time day jobs and spend most evenings and weekends making work and attending art events. Others manage to work part time and supplement their day jobs with art sales, grants, and commissions. And many of us are constantly inventing new ways to support ourselves and our work. Yet most of us have a very foggy notion of how our peers actually pay the bills.

It is easy to get caught up in myths about the art world which lead us to believe we should sacrifice and demand little in the name of advancing our careers. It can be crushing to find out, after countless hours working for free and racking up ludicrous amounts of debt, that the next rung on the ladder feels very similar to the one you just stepped up from. This is not to say that one should never work for free. No artist that I know wants money to be the driving force behind making work. When Temporary Services distributed their publication “Art Work” I found myself having lots of great conversations about how to address feelings of being under-compensated as artists. Some argued for the formation of artists’ unions, others felt art should remain as separate as possible from the need to make money. The conclusion I came to was that we all need to set standards for ourselves. What kind of gallery or institution am I willing to work with despite their inability to offer a budget or artist’s fee? What kinds of institutions should I expect to receive financial support from? How many times in a year will I offer my work for free or go into debt in the name of “exposure”? For how many years do I expect to carry debt for my work? What percentage of my time do I want to dedicate to the various aspects of my practice? These are not decisions that can be set in stone … they must be occasionally reevaluated and remain somewhat flexible. But the act of writing these things down or simply taking time to consider them carefully would shift our perceptions of autonomy.

Where does Shadowshop fall along the spectrum of idealism and desperation? The shop does not grant entreé to any artist who walks in with wares to sell. It is curated by Stephanie Syjuco. The shop gives 100% of sales to artists, but this would not be possible without the institution footing the bill for all overhead costs. I imagine most of the participating artists do not have too many illusions about what having their work in the shop, which is in the museum galleries, will do for their careers. But there is a gray area. What about the artist who may have a full-time job and chooses to spend his/her precious remaining hours of creative energy packaging tchotchkes to restock a popular Shadowshop item rather than wrestling with an unresolved painting? Or for that matter, rather than taking a walk and allowing space for ideas to grow and develop into something that will push their practice to a deeper more fulfilling place? Saying no can be very difficult, especially when the positive reinforcements of money and demand are at play. And this is where the check-in with one’s standards is crucial. Does this opportunity fit my own criteria for the way I want to work as an artist? If not … do I advocate for something different (ask for more support) … or do I decline and focus my energy elsewhere? 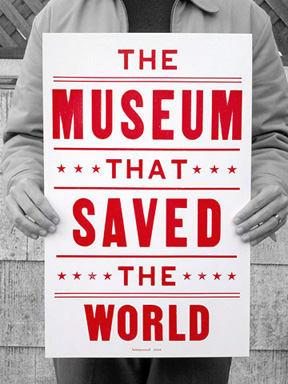 Joseph Del Pesco, The Museum that Saved the World, 2004

This is not a call for artists to demonize institutions and the people who run them. Arts organizations are often underfunded and operating with values sympathetic to those of artists. This is why transparency is so important. I recently heard an analogy on NPR relating the governor of Wisconsin to the head of a company with antiquated ideas about running a business. If the business is in trouble one could assert authority and try to intimidate workers into accepting worse conditions in the name of the bottom line, or one could explain the situation and invite the workers to take an active role in figuring out a solution to the problem. It can be counter-intuitive for people in power to show vulnerability, but it is an essential lesson we humans have to learn. These discussions hosted by SFMOMA feel like a genuine step in the direction of opening the institution up to more active involvement with the art community. Hopefully gestures like this will encourage a general sense of the importance of sharing our strategies for survival honestly in the name of discovering more and better ways to prosper. A part of feeling autonomous as artists in San Francisco may be accepting that this behemoth institution is neither the savior nor the demon we want it to be.

Helena Keeffe makes artworks based in situations and exchanges via collecting oral histories; producing publications; organizing public events; and inviting groups and individuals to work with her collaboratively. Recent projects include public art commissions with the cities of San Jose and San Francisco, as well as a Creative Work Fund–supported collaboration with Laguna Honda Hospital in San Francisco. Keeffe received her BFA from the Minneapolis College of Art and Design in 2000 and was a member of the Independent School of Art, San Francisco, from 2005 to 2006. She is cofounder of Alula Editions with Amber Cady.