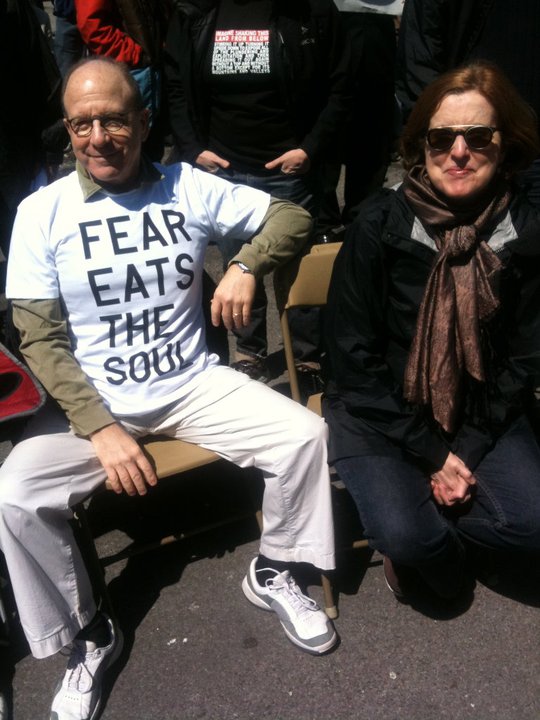 After noticing, on Facebook, natch, that Jerry and Roberta were out demonstrating in New York, I cruised down Geary on Sunday afternoon looking for the chair-themed Ai Weiwei protest to witness the determination of SF art folks. I ran late — though not that late — and by the time I got there, the only crowds I saw nearby seemed to have taken their seating to the Cherry Blossom Festival across the road. Perhaps the the concurrent events were ill-timed, there being crowd control officials already in the neighborhood who chased them away because the Japanese-style street fair had its less contentious sense of humanitarian focus. Whatever the reason, it was hard not to consider the other recent flare up of politically (and economically) motivated art world activism — all those screenings of David Wojnarowicz’s A Fire in My Belly to send a message to the Smithsonian’s lily-livered response to conservatives — and the way that these controversies fade in accordance to news cycles (not to mention how Holland Cotter wrote about both in the New York Times).

Weiwei’s situation is connected to complicated cultural issues — a totalitarian state and an artist engaging iconoclastic spectacles that push against it — and yet such things are not exclusive to China. His situation cannot help but raise questions about which Western artists, living ones anyway, might rally some action around domestic political issues. As our own ominous political officials are ready to gut U.S. infrastructures, most definitely including public support for the arts, aren’t we yearning for leaders in our field to tap into audacious, American-style spectacle to demonstrate how art is indeed connected to real life?