Spring, at art school, is an emotionally schizophrenic season. The weather tends to be glorious (and pollen-filled), as it was today, and campuses pulse with alternating currents of stress, anxiety, hope, exhaustion, and celebration as everyone lurches to the finish line. That was definitely the mix at SFAI this evening, when the campus was buzzing with multiple activities — MA thesis presentations, exhibitions, food carts, bands, red plastic cups, and a keg. To this was added the Northern California stop of Teach 4 Amerika, a Creative Time–sponsored project by the contrarian art collective Bruce High Quality Foundation. San Francisco is the next to last stop in an 11-city tour of American art schools. (Full disclosure — I invited them as part of SFAI’s Visiting Artists and Scholars Lecture Series, which I coordinate.) The group, perhaps best known for their ambulance/hearse/gallery in the last Whitney Biennial, has been touring in another potently reconfigured vehicle — a tattered limo, crudely painted to look like a school bus. 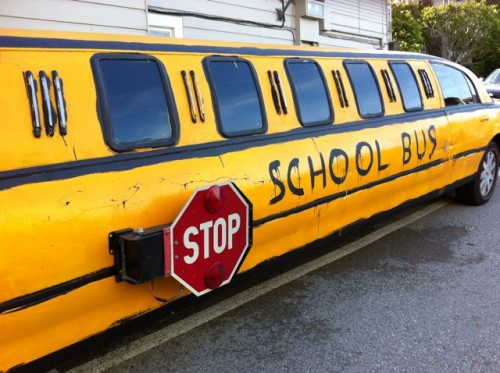 According to their Wikipedia entry, the BHQF was “created to foster an alternative to everything,” this tour intending to counter the pervasive model of art school, which their spokesperson, of a group of Bruces named Seth, termed “MFA-mills.” The presentation itself fit right into the seasonal ebullience and anxiety combo. It started off with convivial spectacle — the lecture hall was littered with multicolored balloons as the San Francisco Lesbian/Gay Freedom Band, perched in upper seats, belted out American standards and late model rock hits, and BHQF members, wielding a bazooka-like device, shot tie-dyed tour T-shirts and pint-size pennants to an audience primarily composed of art students. The transformation of the space was remarkable — a room more used to witnessing art history lectures or artist talks, now hosted a cross between a game show and pep rally. 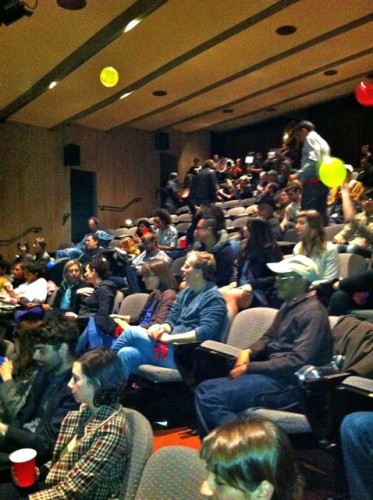 An audience of artists, with balloons and beer 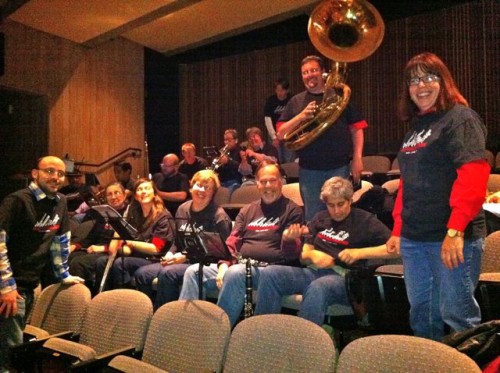 BHQF is nothing if not snarky, and the Powerpoint presentation was just that, essentially offering a child of the 1970s as the model for the current, aspiring art student. While comprised primarily of images that played like art-savvy America’s Funniest Internet Nuggets (and numerous clips of Barack Obama), it couldn’t live up to the energetic pre-show promise. In a nutshell (though more often, the presentation compared art school to a nut house via numerous clips from “One Flew Over the Cuckoo’s Nest“), Seth’s point is that the increasing cost and accredited standardization of arts education is anathema to the core of creative activity — if you took away all the galleries, art schools, art fairs, museums, etc., would people still make art? He went on to suggest that the very real increase in art schools, and the students that graduate from them, has little to do with an expanded market or exponentially rising interest in contemporary art.

All of which is true, but the argument, which admittedly is condensed here, seemed thin. Neither did it seem to resonate with this crowd, as the semi-situationist presentation didn’t offer a glimmer of an alternative other than a lunatics-are-running-the-asylum sense of escape. There was a fittingly contentious tone to the audience’s questions, which called out the lack of articulated options, trouble with the choice of so many Hollywood generated images, and BHQF’s complicity with the institutions they critique. The answers weren’t always satisfying, and yet the Bruces did manage to stir up dust and dialogue (which they’re following up with a less public conversation at a local alternative space). Ironically, it seemed that many of the students, and maybe even faculty, seemed to express more resolve in their choice to be engaging in an art education. 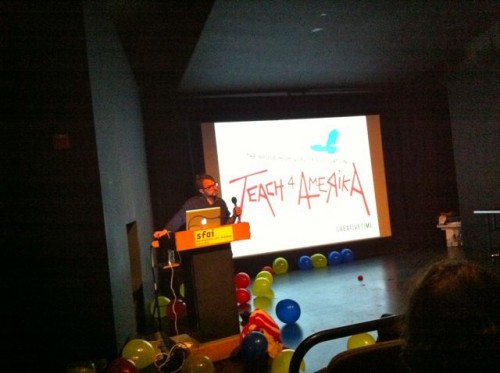 I was reminded of something that was spoken earlier this semester in a professional practices course (another thing called out in the Bruces’ arch polemic) that I’m co-teaching at CCA. We had invited a group of artists who got their MFAs three years ago, and are each approaching their life as an artist their own way. When we asked them if any of them regretted the sizable loans they’re in the early stages of repaying, none of them did. They all admitted they’d do it again in a heartbeat. You can’t help but wonder if BHQF would say the same about this tour.