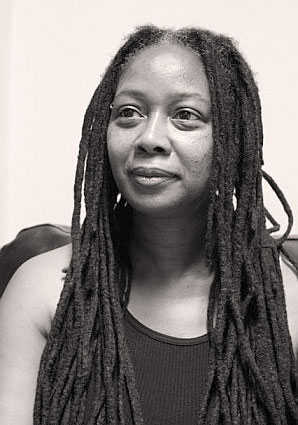 often now when i imagine life i think of what should

be finite, the guise of limitability, the desire for stop

are there greeters there [are you one] when we

is this sea deceptive, as if alive or an

in my own way there was a time when i stumbled

now, bereft, in anticipation of how night collapses

into its own effluence i conjugate occasions, ask just

for time, just a little time,

to get love right

A Toast in the House of Friends

Akilah Oliver, beloved friend, poet, teacher, performer, activist, mother, sister, was born in 1961 in L.A. In the 1990s she founded and performed with the feminist performance collective Sacred Naked Nature Girls. For several years, from the mid-90s, Akilah lived and raised her son Oluchi McDonald (1982–2003) in Boulder, Colorado, where she was a teacher at Naropa University’s Jack Kerouac School of Disembodied Poetics. Recently, in New York City, Akilah taught poetry and writing at Eugene Lang College, The New School, Pratt Institute, and The Poetry Project. She was a PhD candidate at The European Graduate School and a member of the Belladonna* Collaborative.