“In Iraq the new moon’s position in the sky is horizontal. In Sumer this appearance of the Moon resembled the crown or horns of Inanna. Correspondingly the shape of the ubiquitous boats, called in Sumerian mà-gur, the primary mode of transportation through the marshes of the delta, still copy the crescent shape of the new moon. Nanna was thought to ride the crescent moon-boat of heaven on its monthly course.”

I first heard about the salt marshes in southern Iraq from Waleed Al-Oboudi. He told me about Wilfred Thesiger (known in Arabia as Mubarak bin London) who, in the 1950s, had lived in the marshes with the Ma’dan people.

“As I came out into the dawn, I saw, far away across a great sheet of water, the silhouette of a distant land, black against the sunrise. For a moment I had a vision of the Huffaidh, the legendary island, which no man may look on and keep his senses; then I realized that I was looking at great reedbeds. A slim, black, high-prowed craft lay beached at my feet—the sheikh’s war canoe, waiting to take me into the Marshes. Before the first palaces were built at Ur, men had stepped out into the dawn from such a house, launched a canoe like this, and gone hunting here…. Five thousand years of history was here and the pattern was still unchanged.” 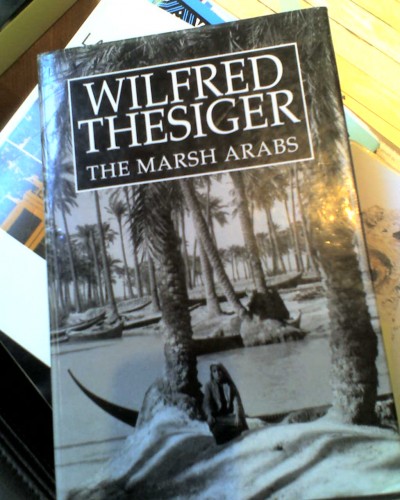 Waleed then recounted to me how, after 1991, Saddam Hussein had nefariously drained the marshes.

You can see a collection of Thesiger’s photographs, including Ma’dan men poling a tarada (boat) here.