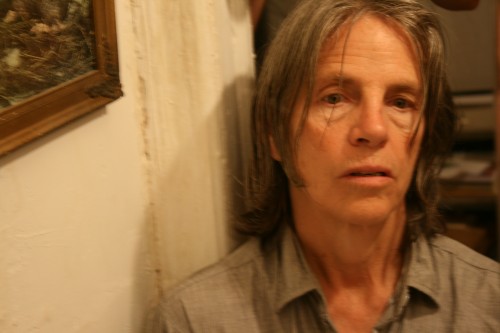 In “I Dreamt I Was A Nymphomaniac,” Kathy Acker somewhat wryly describes the art world as “the bohemia of finances.” Still, questions of money and capital in the art world continue to transpire. Occasionally I will post discussions with artists and curators about the economics of their practice, today an e-mail conversation with the amazing American writer Eileen Myles.

BB: Thanks, Eileen, for having this discussion about money, art, and writing! I’m first of all interested in how you’re “making a living” these days.

EM: I was a full-time academic from 2002 through the end of 2007. So I get a small allowance from them. I’m on the dole. Before then I taught workshops sporadically and wrote freelance, read, and performed. And since then (the full-time academic job) I’ve been writing mainly, my own stuff and lots of different kinds of journalism, art writing, writing about books, etc. Blogs. I’ve been traveling doing readings, having a semester-long visiting writer job, a bunch of short-term — one or two week — ones, and I guess that’s about it. I’ve gotten some grants, too.

BB: You’ve done a lot of writing about visual arts and artists. Other artists and writers I’ve talked to in this series have drawn attention to the somewhat thorny relation of the visual art world to the centers of financial capital. Especially when the work itself seems to advocate for an exploited or alienated class, an oppressed and brutalized gender, or sexuality — the “inevitable” transformation of these works into objects of sale seems paradoxical or at least … complicated! Does this seem like a fair description?

EM: Yeah, yet I think that exchange is one of the few ways some of those exploited or alienated peoples or causes do get expressed. I mean, outside of the academy and political papers and websites. It’s visible, and that seems valuable somehow. Even to make monuments to be sold. I remember seeing genital mutilation (of women) exist as a page of print in a vitrine in a Wolfgang Tillmans show. I wasn’t so much appalled as interested in the fact that a man could include that info in his work, and I couldn’t think of a single woman who would or could. All of this in a world where politicians may or may not rally at all to save any kind of public funding for art in America. And, increasingly, fashion and the design industry is supporting the visual arts. It seems more melancholy than paradoxical.

BB: And then, I guess, I’m wondering if you track a different situation for writing versus the more generally commodified art world?

EM: You mean in the way that we make wider claims for more kinds of people with fewer sales in quieter venues? Writing is less splashy for sure. Smarter in more complex ways, less sophisticated in other ways. Our society is more about the world but in itself less worldly. I think the arc of being innovative is a little more desperate in writing and more uneventful. Our world is less brash than the art world, I mean in terms of our relationship to media and the artist’s expectation of being heard. In writing, the part of the world that labels itself experimental is often kind of old-fashioned. Or maybe just not interested in fashion. Which is not bad, but it’s slower and quieter. Big publishing is in the hands of oafs largely. There’s a big opportunity for détente in art and writing, but I keep saying this maybe while it’s passing. Sometimes I think it’s two snow globes next to each other. Someone warm needs to pick them up and give a talk perhaps. Or make a movie about what’s real inside of them. Have you noticed airport security bans the carrying of snow globes? They’re a weapon, it turns out. I’m not sure what I’m talking about.

BB: In the Valentine’s Day piece, which appeared in Awl, you write, “Is writing just a job. Writing books, writing poems. If it is then the message to women is to go elsewhere.” You note that recent numbers analysis of poetry reviews show supposed sex parity, but also that the majority of people writing poetry are women.

Does the fact of the “fewer sales in quieter venues” make the poetry world a place less inclined to send this message to women? Like, while there’s still no shortage of the heroic guy poet thing, in that “experimental” poetry world I’m at least hearing the questions and challenges that seem feminist.

EM: I think the poetry world you’re describing in so many ways is women. It’s women-driven. Increasingly we’re actually seeing women including men in their things. Our neck of the woods is probably the best there is. I think we just have to resist being precious and guarding our borders too hard. Not looking out.

BB: I’m just curious — what does “sophistication” mean to you? I’ve been obsessed with it as a thing just out of reach, being raised in a sort of backwards, rural meth-town in middle America and moving to San Francisco at 18.

EM: Yeah, I’m from suburban working class Massachusetts. Not much culture there. Though it wasn’t far. But still you had to get on the bus. I always knew the kids on the bus going to Cambridge were the sophisticated ones. I suppose that’s it. Being sophisticated has something to do with having a choice and making it. Creating an aesthetic. Knowing what’s out there and not being beholden to it and not being oblivious of it either. You don’t even have to do a lot. Culture is exhausting, right. But I think there’s an increasingly wide band of hunters and gatherers working across the art-making worlds, and they are the most sophisticated people I know. I vote for seeing them get rewarded for doing this crucial work of doing and knowing. But you know it is its own reward to know. We don’t do this ’cause it’s NOT a pleasure. 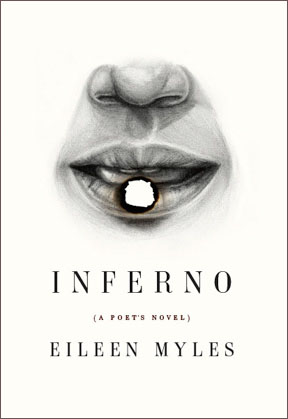 BB: What’s your take on the economics of “coming up” or, to use artist-speak, “emerging”? Reading Inferno, I got the impression of this lost New York City, a place that somebody goes to be an artist and can do that and not work all the time. I don’t mean that your book is utopian or romantic in a dumb way — but it describes a different kind of scene than the one I see now for young writers and artists who are encouraged to buy themselves a couple years at very expensive MFA machines.

EM: I think it’s less geographical but that younger writers could probably think of coming to New York more actively as a collective project. Do people live together in big or small groups with the goal of working on their writing or art and NOT getting a job. I’d love to hear about that project. I’m sure it’s possible. If part of your ideal was witnessing your time and working in it instead of having to succumb to it I think a lot could be accomplished and differently. I wouldn’t like to live with people, though. I’m bent by the opportunity I had to get away from my suburban family and live mostly alone. Most of my friends lived alone, too. But our story isn’t the dominant one. Its fragility is probably there to be witnessed. I think that’s why I wrote that book.