Five questions to SFMOMA artists, staff, or guests. Today we hear from Douglas McGray. Douglas is editor-in-chief  of Pop-Up Magazine, a writer (The New Yorker, The New York Times Magazine, This American Life),  a senior fellow at The New America Foundation, and adviser for The Atavist. Tomorrow night Pop-Up Magazine presents Sidebar: Wine! as part of Now Playing‘s evening events. 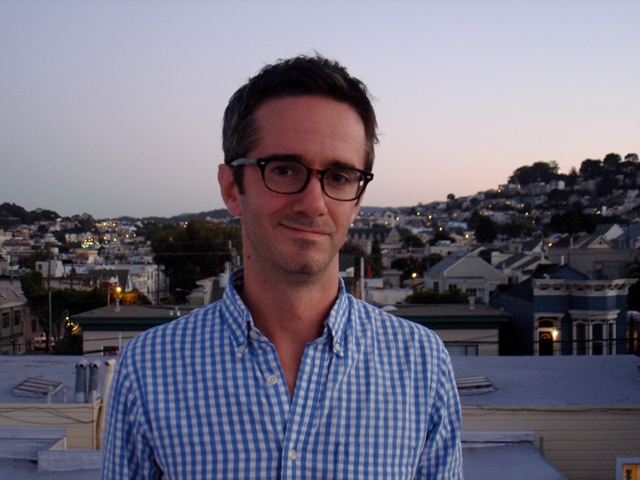 I know I’m supposed to say a famous person, but the truth is, I’d probably invite one of my far-flung friends, who I miss. I’d make something with a ton of California fruits and vegetables, preferably in the dead of winter, because my friend probably lives somewhere cold and gray, and people aren’t meant to live like that, shivering, rushing to get inside, eating sad fruits and vegetables — they should move to the Bay Area, right? It’s the only reasonable thing to do.

Richard Serra’s Equal Weights and Measures. Wouldn’t that be a great heist? But then I’d have to get it up the stairs. Hmm.

Other than your phone, keys or wallet, what do you always carry with you?

I consider it an achievement when I manage to remember my phone, keys, and wallet. You expect more from me? I guess I usually carry a small graph-paper notebook. My life is pretty digital, but for ideas on the fly, I haven’t found anything that feels right like an old-school notebook.

What is this Sidebar show? When we started Pop-Up Magazine in 2009, we never imagined it would take off so quickly.Tickets to our last two shows, Issue 3 and Issue 4, at Herbst Theater, sold out online in a matter of minutes! (For Issue 5, we’re moving to the San Francisco Opera House, to give more people a chance to join us for the night; we hate leaving anyone out.) People really seem to enjoy coming together around writing, documentary film, public radio, and photography. And drinks. And as much as we all love the internet, it’s nice to unplug for a night, and participate in something truly, exclusively live. Anyway, we got to thinking, wouldn’t it be great to have some way, between issues, to host different kinds of live events, in different spaces, around our community of writers, documentary filmmakers, radio producers, and photographers? We think stories and ideas are good for public life, and for nightlife. So we came up with a new Pop-Up Magazine series, Sidebar. We’re thrilled to debut Sidebar at SFMOMA. And we’re excited to figure out all we might do with it in the future. If you can catch the show, come up and say hello, and tell us what you think.

Each issue of Pop-Up Magazine is a live performance, created for the stage and presented to an audience in real time. At the March 17th Now Playing, Pop-Up debuts their new between-issues format: Sidebar. With SFMOMA’s exhibition How Wine Became Modern: Design + Wine 1976 to Now in mind, Pop-Up‘s first Sidebar tackles the culture, science, history, politics, and humor surrounding our favorite drink. Come early to Now Playing – there’s lots to do.