It’s a funny question, I know. Funny, because largely I find no one has much of any feeling at all “about” Paris Hilton. Especially these days. When I put the question on the Facebook, “So, how do you feel about Paris Hilton?” OPEN SPACE blogger Scott Hewicker responded wisely, “Who?”

And yet we all divest ourselves of libidinal energy towards figures who cannot be said to really “exist” in our world as a receptive object of that energy. Celebrities are just extremely legible examples of this. They’re objects we think about constantly, which we analyze with our lovers and friends and families, which we appropriate as the furniture of our fantasies. But the structure is very common. Even the pharisaical haters of pop culture perform it all the time. Like people have “feelings” about what kind of person De Kooning was. Or whoever. 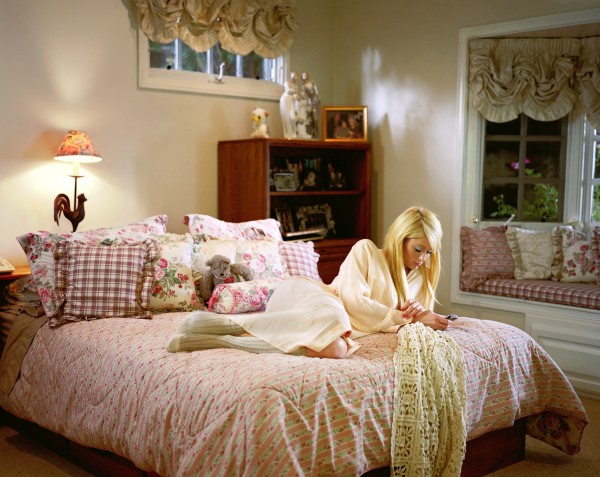 But to return to Paris, I find the range of response to her cultural apparition goes from repulsion to ambivalence instead of the more typical “love her or hate her.” That is, no one “likes” Paris or sympathizes with her particular performance. The refrain is often that Paris can’t be an adequate object of libidinal investment because “she doesn’t make anything.” This is, I think, a way consumers often differentiate what “Paris Hilton” means from what, say, “Lady Gaga” means.

But au contraire, Paris “makes” or has made an abundance of material. The opening of her Wikipedia page describes her as “an American socialite, heiress, media personality, model, singer, author, fashion designer, and actress.” The material productions involved in Paris’s acting, singing, writing, clothing design, and perfume lines are all part of the larger project, which is the creation, branding, and performance of “Paris Hilton.” You know how the etymology of “poetry” in Greek means “to make”? I’ve been thinking lately that the most proper way to describe what Paris Hilton “does” is “poetics.” Everything she “does” is translated into something she “makes,” that is, she makes herself by doing herself, at all times.

I went to the Stephen Wirtz gallery to see a print of one of Larry Sultan’s photos of Paris Hilton. Julie at the gallery retrieved it as the space was transitioning from one show to another. We brought it out and looked at it together in the light. I learned the story of the photo, which is alternately called Paris and Paris In My Parents’ Bed. The shoot took place in one of his childhood homes in the San Fernando Valley.

I read the photograph as an allegory for Paris’s poetics in general. What Paris’s poetics do is transform her very being and every movement into an associated part of the product “Paris Hilton.” In Sultan’s Paris, Paris herself responds to the ambivalence with which the public generally receives that product. Assuming the center of a zone of excessively careful artifice and theatricality, she responds with absolutely effortful carelessness.

The room itself is impeccably composed, a lived-in space that can’t quite be located in a decidable era. It looks like the child of 1955 and 1985, with all available California kitsch between available for its vision. Paris herself is both contiguous with the scene and radically at odds. Contiguous in her shape and colors, the beige of her robe running into the throw that erupts out of her body and flops onto the floor like an embroidered tongue. But on the other hand, her behavior is absolutely anachronistic. As if she packed her cell phone in a purse on the DeLorean and got a signal in the past.

As an instance of how detailed the composition of the room is, consider the arrangement of the animals on the left side of the image. The lamp on the bed is of course a “cock,” and moreover a cock standing at attention. Its light is the warm bath one supposes washes over Paris’s frame. The teddy bear is strategically placed so that its angle suggests it’s looking at Paris’s ass, or trying to sneak a peek up the robe. It’s a total combination therefore of kitschy urban pastoral innocence (a cuddly teddy bear!) and the shameless posture of the perv voyeur. And Paris, far from being unaware of the lusty bestial conspiracy which Sultan has prepared for her, simply doesn’t care enough to notice. That’s part of the poem of her life. She’s got a text to send. Is it to Nicole Richie?

That is, for Hilton, the photo shoot with Sultan is not just a day in the life; it’s like three hours in the day of a life. The careful composition of the niche into which she’s arranged does not provoke the slightest response. By the fact that at every moment she is performing the commodified poem of her being, the normal or expected responsiveness to the artificiality of the surroundings is mooted. She is just “doing” Paris — a poetics of radical ambivalence, theatrical in its banality.

Sultan’s Paris In My Parent’s Bedroom is in extraordinary contrast to Nick Ut’s Paris Hilton is seen through the window of a police car as she is transported from her home to court by the Los Angeles County Sheriff’s Department in Los Angeles on Friday June 8, 2007. I tried to suggest that Ut’s photograph depicts more than Paris Hilton crying in a cop car, that it shows her transplantation from a manor (which the law absolutely strives to protect) to a place radically unfamiliar in her lived experience. Unlike Sultan’s rich staging, however, a cop car is a relatively banal, endlessly repeatable and familiar image. Yet it’s this monochrome leather commonplace of spectacular culture that frames the very uncharacteristic outburst from Paris.

But that outburst has to be juxtaposed to the uniform, consistent product that Paris Hilton makes. You know, “Paris Hilton.” That poem of stoic confidence in the staying power of power. What Ut captured is a poetics gone wild.

And yet what’s also striking is that Sultan’s Paris might provoke a more emotional response than Ut’s. The consistency of her work as an emblem of feelinglessness proves hard to overturn. In Sultan’s image, however, Paris appears in all the glory of how her product operates: feverish ambivalence. And we hate her for it: actively, foolishly, carefully.