The Fruit of Labor

On red-letter days in the gastronomic calendar, from harvest home (“thanksgiving”) to the saturnalia at the turning of the year, the issue of “food miles” has become a staple of conversation around Bay Area dining tables — a ritual culinary mea culpa which no tithing by gourmet penitentes at local farmers’ markets can quite expiate. But why stop there? What about “art miles”? How far would you, should you go to view a roomful of paintings? Well, according to T. J. Clark, it’s “worth travelling the earth” to see the one-room exhibit of Cézanne’s Card Players and Smokers, currently at the Courtauld Gallery in London. In particular, “an astonishing trio of large portraits of a middle-aged man, probably a farm labourer, in his Sunday best,” on loan from Mannheim, St. Petersburg, and Moscow. 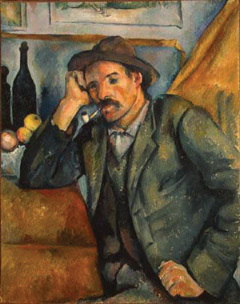 What is it about these three images arranged side by side that Clark finds so remarkable? In the London Review of Books (2 December 2010) he describes them as “the most complex depictions of ‘an ordinary fellow’ to come down to us from the recent past. A peasant, I suppose we have to call him. An actor in that great historical turning point at which life on the land hung on — just — to its age-old texture and structure, and intellectuals sang its praises. Over the century of Cézanne worship, readers were regularly treated to stuff about Cézanne’s human subjects not having been granted humanity and character, and their coming across much like objects in a still life; and one great advantage of leaving the age of Cézanne behind is that this kind of judgment has come to seem, if not incomprehensible, then massively wrong.”

Wrong, argues Clark, because it is now possible — that is, from a 21st century vantage point where daily life has been thoroughly colonized under conditions of spectacle — to look at the three Smokers and recognize that what had been mistaken for the artist’s failure to render humanity and character was in fact an aspect of the — contingent — greatness of these paintings. The trio of portraits convey, across the abyss of the 20th century, the embodiment of a different humanity, standing against the tide of modernity. For one thing, says Clark, the sitting labourers “are not producing ‘themselves’ for the painter-viewer. Which is to say, they come to portraiture from a world — from a class position — just a little outside the genre’s suppositions and implicit bargains. That is the point. They are awkward, resplendent, self-possessed men. Working men, enduring the attention of the odd son of a dead banker (who paid well). They are, it now seems possible to see, monuments to a specific way of life — to another kind of balance between inwardness and exteriority — but we are treated to that monumentality precisely because the ambition to ‘represent the peasant’ was utterly foreign to Cézanne’s cast of mind. The ‘peasant,’ for him, emerged from the given. And of course the banker’s son, the lycéen with his quotes from Lucretius and Baudelaire, agreed with his class’s best thinkers that the given reality of the world was atom, photon, touch, opacity and transparency, unique sensation, lived intuition of space. In the St. Petersburg painting, the red of the peasant’s lip bleeds — explodes — across his chin, neck, earlobe, shadowed forehead. In the Moscow version, the man’s hand on his thigh is like a huge pair of callipers, holding and measuring the cylinder for eternity.” 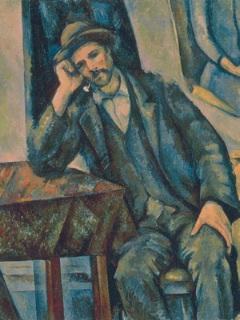 The endurance of the peasantry — so offensive to modernizers of left and right — was the subject of the art critic John Berger’s trilogy “Into Their Labours” (Pig Earth, Once in Europa, Lilac and Flag). In these novels he took up the risky task of “representing the peasant,” the form and rhythms of life on the land in an isolated community in the French Alps. Berger had rusticated to Haute-Savoie in the 1970s, soon after the production of Ways of Seeing, his riposte (both a 4-part TV series and a short accompanying Penguin text) to Kenneth Clark’s art-historical survey and BBC/PBS blockbuster, Civilization. Lord Clark’s lofty ruminations on the Western artistic canon — judgments felt in the bone, naturally — were themselves a defensive response to the shock of ’68. We can now also recognize it as a harbinger of the Thatcher/Reagan era culture wars.

Berger was certainly alert to the pitfalls in the path of the self-appointed Gramscian organic intellectual, and insisted that his purpose was “not to idealize the peasant.” Indeed, their “attitudes are, in the strict sense of the word, conservative. At least until recently, the physical reality of the peasant’s conservatism has hindered his understanding of the political realities of the modern world. These realities were originally a bourgeois creation. The bourgeois once had, and still to some degree retains, a mastery of the world of his own making.”

At the center of the peasant’s world is food and its production. In a short essay entitled “The Eaters and the Eaten,” written in 1976, Berger compares the lifeways of the peasant and the bourgeois, specifically the business of eating. I would bet that Berger’s reflections were prompted by a viewing of Bertolucci’s epic of modern Italian cinema, 1900, released the same year. Early in the film, in two great juxtaposed set pieces, Bertolucci contrasts the sprawling, riotous banquet of the Dalcò clan, peasants who work on the Berlinghieri estate, with the starched proceedings around the table of the padrone Ottavio Berlinghieri and his family. 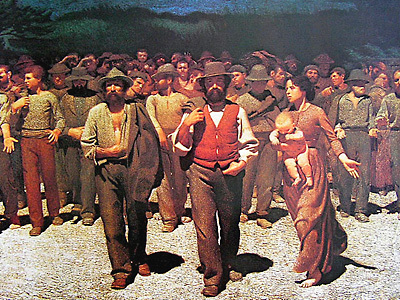 The peasant meal, Berger notes, takes place in the middle of the day, surrounded by work. Indeed, food simply is work accomplished. The peasant mostly uses just one plate and one implement; on the bourgeois table, by contrast, every dish has its own cutlery and plate, and the meal is “a series of discrete, untouched gifts” abstracted from the scene of their production. The dining room is a theatrical setting for oedipal and related family dramas. The conscious emphasis on wit and repartee reveals, however, that boredom always haunts the room. 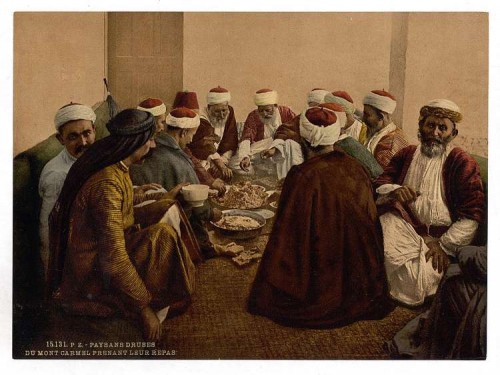 Above all, “the distinction between the principal regular meal and the celebration or feast is very clear for the peasant, and often blurred for the bourgeois.” What the peasant eats, and how, is continuous with the rest of life, embedded in the daily round and the seasons. A peasant feast is the consumption of a surplus saved, “a double celebration — of the occasion which gives rise to it, and of the surplus itself. Hence its slow tempo, its generosity, and the active high spirits which accompany it.” The feast for the bourgeois is fundamentally about money spent; “the true celebration of a surplus is beyond him, because he can never have a surplus of money.” 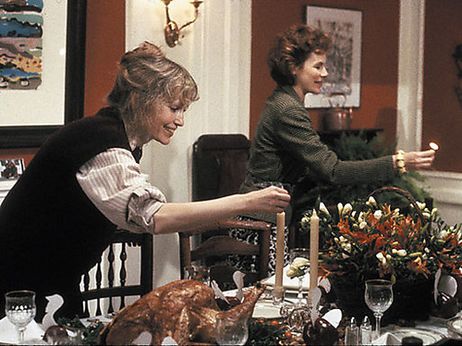 Thanksgiving in Upper Manhattan (1986) – Hannah and her sister

A few nights ago I was with a dear friend — a novelist and a screenwriter — who lives in North Beach. He is a denizen of the old bars and cafes of San Francisco, and over Cinzano and focaccia in Mario’s Bohemian Cigar Store Cafe on Washington Square we were discussing 1900. He remarked that although the film is centered on the relationship between Alfredo Berlinghieri (De Niro) and Olmo “The Elm” Dalco (Depardieu), it is actually the petit bourgeois Atilla Mellanchini (played by Donald Sutherland), an ordinary modern fellow employed by the Berlinghieris to manage the family estate, who holds the key to the dynamics of the 20th century. And not least the foodways: the high-fructose shopping basket of homo modernus, the refrigerator of Repo Man and his family, and even — especially — the organic, low-fat, fair-trade consumerism of his enlightened neighbor. No doubt the hippie’s cauldron of beans and the yuppie’s artisanal bakery constituted a real criticism of cold-war cuisine, the shrink-wrapped individualized portions and the industrial bread. But if Berger is right, and considering the splendid Smokers sitting there at the table in their boredom and repose, the slow food movement offers only a simulacrum of the pre-industrial rhythms of peasant life, and is ultimately no model for exiting denatured modernity.

In 1995, close to his 70th birthday, Berger was asked how he would like to be remembered, and he replied simply: “By what I brought back.” Pig Earth and 1900 aimed at portraying, in novel and film — modernity’s signature media — the world that was being lost, and a class that Cezanne had bodied forth in the Smokers and the Card Players. Berger and Bertolucci did so — no accident, this — at the moment of defeat for a left which had wagered so much on the insurgent peasantries of the 20th century, imagined as agents representing not the past but a revolutionary future.

It is an unexpected irony that, as the 21st century dawns and after the fiasco of the Copenhagen and Cancun “climate talks,” it is the peasantry — the sustainable foodways and forms of life of the via campesina — that once again is being asked to bear the hopes of another world on their shoulders.