One on One: Arnold J. Kemp on Sargent Johnson's Forever Free

Our “One on One” series features artists, writers, poets, curators, and others, from around the country, responding to works in SFMOMA’s collection. You can follow the series here. Today I’m so pleased to welcome artist, educator, and writer Arnold J. Kemp. 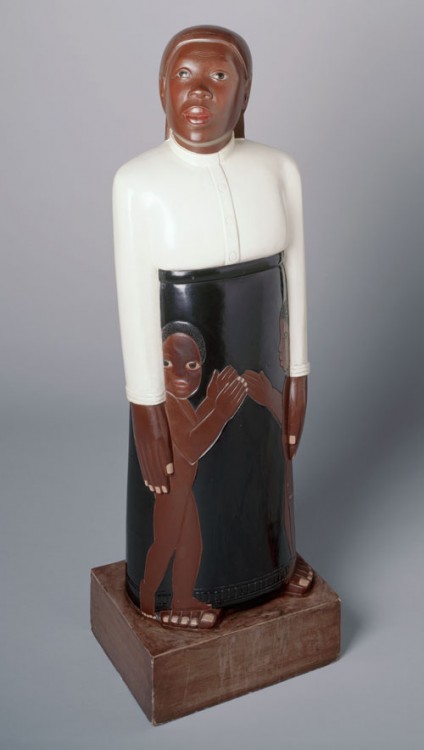 Here is the statue of queen whats-her-name
she feel fever roof
a real black mother of black equestrian vivacity.

Perhaps you are too.

yes yonder
you you you

But nothing
Blond Negress
but no

other bodies are coming to take her cup of money.

At five-foot-six and
elegance she is a head turning beauty.

This is the way she tells it:
her bosses told her they couldn’t concentrate on their work
her appearance was too distracting
turtlenecks, pencil skirts, three-inch heels, or fitted business suits
a 33-year-old single mom
clothing far more revealing than hers:

their body shapes were different she says.

they act this way

and it shouldn’t be her problem

These men shall taste the sadness of her might,
and know the melodies her choir had sung.

we wear welcome well while whispering who
who whole why

yes yonder
you you you

If the motivation is to help others
to heal and alleviate suffering
then the intention is based on compassion.

The more the spirits connected to us are happy, the happier our lives.

When beings around us are happy —
neighbors, spouses, friends, children, the
people we work with —
it makes us happy.

When a person we are connected with
is not happy, often he or she wants happiness from us.
And often we don’t know
what we can give — and sometimes we can’t give.

Realizing the nature of mind
we find what we are in the inseparable state of
awareness and emptiness.

there is an effect in life.

There is nothing to defend
no self that needs protecting
because our own nature is spacious
and can accommodate everything.

No one can do anything to it.

It does not age, does not develop or deteriorate,
isn’t born, and doesn’t die.

Through this realization
confidence and fearlessness arise.

Though experience arises without ceasing
we remain connected to the unchanging space in which it arises.

When the nature of mind is realized, the
spontaneous perfection of all phenomena is understood.

We need not try to own it or claim it.
It is here already, beyond hope and fear.

Untitled 1933 is an ekphrastic poem, “ekphrasis” being a vivid description of a thing. Ekphrasis during the Greek period included descriptions of such battle implements, as well as fine clothing, household items of superior craftsmanship (urns, cups, baskets), and exceptionally splendid buildings.

Homer’s description of Achilles’s shield was later imitated by Hesiod in his description of Heracles’s shield, by Virgil describing Aeneas’s shield, and by Nonnus describing Dionysus’s shield. In the twentieth century, W. H. Auden re-envisioned Homer’s story in his poem “The Shield of Achilles,” replacing Hephasestus’s grand images with apocalyptic ones: barbed wire and bare fields, rape and murder, bureaucrats and sentries.

Auden’s poem is an example of how ekphrasis has changed in modern times. Ekphrastic poems are now understood to focus only on works of art — usually paintings, photographs, or statues. And modern ekphrastic poems have generally shrugged off antiquity’s obsession with elaborate description, and instead have tried to interpret, inhabit, confront, and speak to their subjects.

“Particularly in the nineteenth and twentieth centuries there is a good deal of such poetry, addressing a wide range of good and bad, great and obscure, unglossed or overinterpreted works of art, and taking up a range of stances toward their objects,” wrote John Hollander in The Gazer’s Spirit, a collection of ekphrastic poems and the artworks they confront. Some of the ways modern poets have faced works of art, Hollander wrote, “include addressing the image, making it speak, speaking of it interpretively, meditating upon the moment of viewing it, and so forth.”

Untitled 1933 has its turn at ekphrasis in addressing the social climates that seem to haunt the air around a polychromed, cloth, and wood statue called FOREVER FREE (1933), by Sargent Johnson. The poem attempts a rendering of the subject in the light of contemporary concerns of race, spirituality, and single motherhood. One thing that I would not have done with this writing would have been to deliver an art critical text, an account and analysis of how the form of the sculpture, one that is very beautiful and rather conservative, pushes against the title of the work to present what seems to be the contradiction between what the sculpture looks like and the “freedom” it might have been meant to inspire or monumentalize.

Other sources of language came from The Village Voice’s  recent cover story on a woman in New York City who is suing her employers for wrongful termination, and a book called Healing with Form, Energy, and Light: The Five Elements in Tibetan Shamanism, Tantra, and Dzogchen by Tenzin W. Rinpoche and Mark Dahlby.

FOREVER FREE is very beautiful. I have often gone to SFMOMA just to look at and study it in an attempt to understand the work’s surfaces, the paint application which mimics the smoothness of burnished ceramics works, and the soft gloss that gives the work its incredible sensitivity and old craft-like charm. The surface of the work will always be a mystery. (At least in order for me to enjoy the sculpture it should remain so.) Johnson must have felt something else going on beneath the surface of the work because despite the control that must have been demanded of him to achieve such a surface the piece is titled FORVER FREE. But what is free about this work? Is this how he felt in the midst of his meditative practice of carving and painting wood or was this what the characters (the mother and two children) depicted were meant to symbolize? At any rate the work is quite stiff, well-mannered, and rather frozen.

I saw this work most recently in March 2010, while it was on loan to the Tate Museum, in Liverpool, England. What a surprise it was to see it so far from home. When I was asked to write of something in SFMOMA’s collections I had to choose a piece that I love and love to visit.