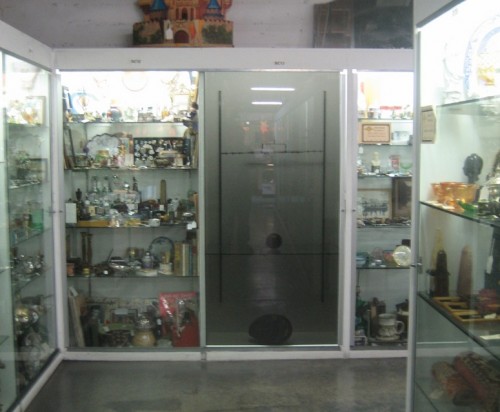 One of my favorite haunts in San Francisco is the San Francisco Antique and Design Mall, tucked away near the end of Bayshore Drive near Industrial, just before it reaches over into Visitacion Valley. It’s one of the few places in the city where, once inside, one can truly feel like they’re on vacation, or at least in another, much smaller town where these kinds of antique malls are more prevalent. The place is huge, and one can easily spend a couple of hours strolling the two floors of large booths and the myriads of showcases that are either filled to the brim or sparsely empty with a unique confluence of the old and the odd. It’s almost better than a museum.

The showcases are in the front section of the mall, and I usually save browsing them for when I’m getting ready to leave. There’s so much to look at that my eyes need to take in the larger rooms of furniture, paintings, musical instruments, and memorabilia toward the back and upstairs, before they can be honed down to focus and take in the vast arrays of tiny objects, knickknacks, and collectibles.

It was back in September when I was there buying antique glass slides for a glass slide projector I just bought that I first noticed something odd about one of the showcases. It didn’t hit me right away. I was perusing the banks of shelves that are normally crammed with stuff, and I came upon this showcase that only had a few items, about one on each shelf, very attractively displayed. That in itself wasn’t unusual. I mean, there had to be at least one dealer out of the hundred or so operating that thought perhaps a few choice pieces elegantly displayed would stand apart from the crowded cases that crammed World War II memorabilia and perfume bottles next to porcelain figurines of Disney characters and old issues of Playbill.

What struck me as odd about it were the objects themselves: an empty wine bottle perforated with a pattern of holes; an old leather satchel or ledger book that looked like it had been burned, unfolded along the shelf with similar charred objects; a bird’s nest sitting atop a case that housed it. Everything in the case had the aura of a unique and time-worn object that you would expect at an antique store, but with a mysterious quality of intervention that remained unsettling. It wasn’t until I noticed on the ground behind me a long fault line in the concrete floor emphasized with silver foil tape leading up to a small tucked away sign with artist’s names, that I realized what I had been looking at was an art space hidden in plain site. 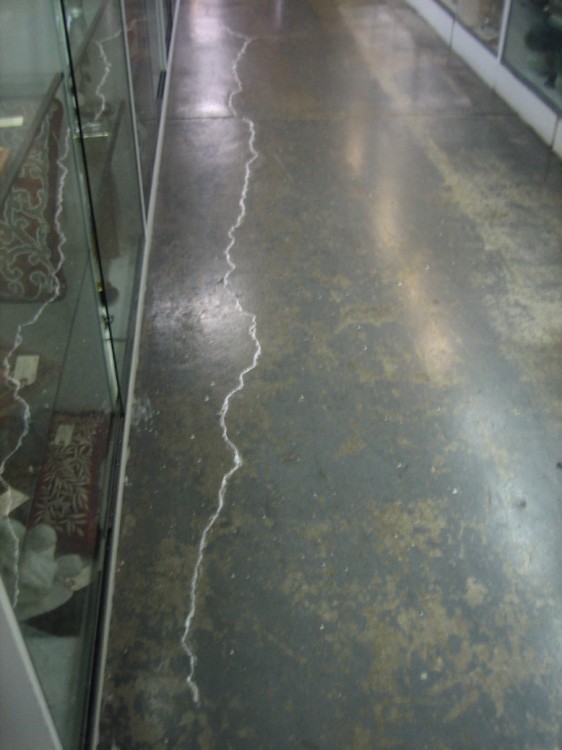 SC13, as the space is called, is the work of curators Chris Fitzpatrick and Post Brothers, involving the work of over 24 artists in a continuously rotating, shifting, and evolving display over a period of six months. It is scheduled to conclude on February 1st. When I went back to see it last week, the interior walls had been painted gray, casting an even more brooding mystery on the three new objects now on view: a metal, futurist-looking mobile that hung perfectly suspended and still; a sphere made of black mirror; and a military-looking helmet-like object made from what looked like dark camouflage felt. The beauty of these rotations has been the oblique relationships and the difficult-to-pinpoint nature of the objects on display. One that plays on and with the obsessive desires of the collector mentality.

Such benign parasitic interactions — I’m going with the term, “ParaSites,” a space operating within a space that is separate but mutually beneficial — have been cropping up more often in the city, and they are not always limited to artistic spaces. Mission Street Food, who at one time would take over an existing but unpopular restaurant for one night a week, or Pals Take Away, a specialty sandwich stand that works out of a neighborhood market, are just a couple of examples. On the artistic front, the Adobe Backroom Gallery in the back of Adobe Books and Right Window, a loose collective-run gallery (in which I’m also a member) that operates an autonomous storefront space in the right window of ATA. Even Stephanie Syjuco’s Shadowshop, currently on view in SFMOMA, can be viewed as a type of ParaSite.

In a city that thrives on the constant reinvigoration of fresh artistic energy, this alternative model of exhibition is refreshingly savvy. Especially when they are least expected, opening up an artistic dialogue in places where that doesn’t usually happen. Find them while they last.