Kenny Dorham’s Cousin Is an Artist

It’s often overlooked in the Bay Area, but the music scene and the art scene have always been closely connected. At 65, artist Mildred Howard knows that as good as anyone. She is also a good example of someone who has had numerous opportunities to move or relocate, but for her the music and family has helped keep her here. She is one of the quiet forces in the Bay Area art scene and is as busy as ever with exhibitions that take her all over Europe and the United States. 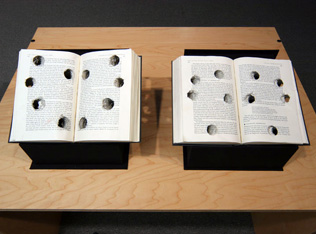 Volume I & II: The History of the United States with a Few Missing Parts, 2007

Her great love, though, is jazz. By her own account she has attended hundreds of jazz shows and has seen all the greats. Because she grew up in Berkeley she was able to go to concerts when San Francisco was still famous for its jazz nightclubs scattered throughout the Fillmore, the Tenderloin, and in North Beach. Instead of talking strictly about art, which she does all the time for work as a teacher, I asked her to discuss her feelings about music.

Listening to her speak I could only imagine the radically different San Francisco that used to exist. It was one where Miles Davis or Dizzy Gillespie might be heard on any given night. Or John Coltrane, or her cousin, the late and great trumpeter Kenny Dorham.

Despite being one of the top Bebop trumpeters, on par with Miles Davis and Clifford Brown (who also died young), Dorham was one of those guys who never got enough credit. It’s odd because he replaced Miles Davis when Davis left Charlie Parker’s band. And it was Dorham who backed the best vocalists out there — including Abbey Lincoln, and later Betty Carter on some of her finest recordings. Basically he was one of the best and most sought-after musicians of the jazz era.

Through Howard I learned that Dorham came out to Berkeley quite often. When he visited he would often bring all kinds of interesting musicians over to Howard’s house when she was a kid. She told me that one time her cousin Kenny was coming up the stairs in her house to say hi, but she was mistaken — it wasn’t him at all — it was saxophonist Jackie McLean, whom Dorham brought by just for fun. 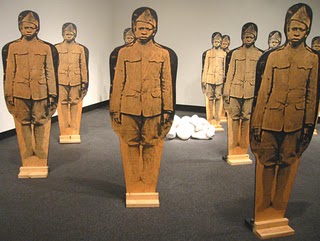 So having been exposed to all that creativity as a child it comes as no surprise that Howard became an artist. It’s also clear from listening to her just how deeply music has influenced who she is and what she makes.

Still, a lot of people might not consciously realize just how much the 1950s and 1960s nightclub culture affected the arts in the Bay Area. Given that long history, Howard is hardly alone in having been affected by it. Both William T. Wiley and Mike Henderson are known as accomplished guitarists. Chris Johanson plays bass. Both Clare Rojas and Shaun O’Dell play the banjo. And so on and so forth. The music connection is just one more reason that Jack Kerouac made San Francisco a key destination in his novel On the Road. It’s the same culture that later attracted the hippies from all over the world to Golden Gate Park. It was there in 1967 at the first Human Be-In (which was also a concert) that Timothy Leary famously said, “Tune In, Turn On, and Drop Out.” Now if that doesn’t sound like the title of a bebop jazz tune, I don’t know what does.