Our “One on One” series features artists, writers, poets, curators, and others, from around the country, responding to works in SFMOMA’s collection. You can follow the series here. Today, please welcome artist John Davis, who also works for the museum part-time as a film projectionist. 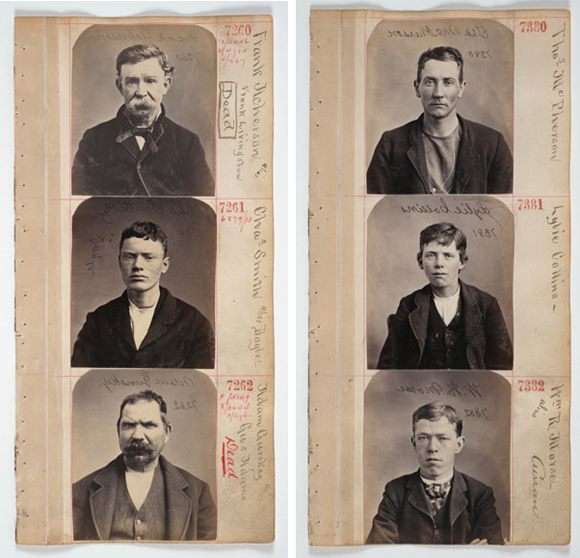 I was initially drawn to this work because it has no known author, reinforcing for me some questions about what constitutes a work of art, and the idea that authorship need not always be prerequisite. As I thought about what to write, another phenomenon became apparent to me, how the author’s anonymity seems to create a lingering sense of menace imbued within the photos themselves. Not so much emanating from the subjects photographed, but from the fact that they likely had no say about being photographed, no ability to influence the ways their images would be used, and that they were subjects of a larger sociocultural project aimed at control. As I weighed these factors together, an ironic tension became apparent, which was further compounded as I considered my contemporary and privileged gaze.

Photography’s trickery remains irresistible to me, its highly convincing illusions perpetually compelling me to believe they somehow convey facts. As I further studied the images, some familiar questions emerged, and I found myself trying to reconcile “the burden of representation” (as in John Tagg’s book of the same title) with the more transcendent aspects of the artwork itself: the imprint of a handmade binding, the beautiful patina and soft red numerals alongside elegant cursive script, the aura of nostalgia, and the powerfully compelling appearance of defiance, innocence, fear, despair, and sadness on the faces of those photographed. Smitten with this base aesthetic appreciation, I found myself at odds with my spite for the insidious mechanisms of state control, and the uses of photography to that end (not to mention questions about how such loaded documents are assigned relevance in the sacred space of a museum of modern and contemporary art). How do the intersections between engaging these evidence records as artworks (let alone my impulses to indulge them on that front), and the recognition of them as clinical specimens for social regulation coalesce? John Tagg writes:

Power, then, is what is centrally at issue here: the forms and relations of power which are brought to bear on practices of representation or constitute their conditions of existence, but also the power effects which representational practices themselves engender — the interlacing of these power fields, but also their interference patterns, their differences, their irreducibility one to another. [1]

As needlessly complicated as all that sounds, it’s hard to ignore the implications in the evolution of photography as a scientific instrument for delivering articles of “truth” in service to power.

Moreover, as I ponder the complex ways these photographs function in the context of fine art, I ask myself if an anonymously photographed mug shot like the one below might then also be collected, exhibited, and considered an artifact for high culture? 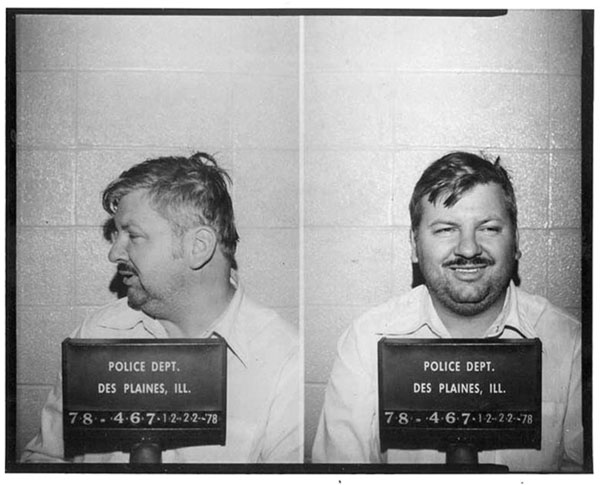 Maybe, but most likely not, and if not, why? What makes this picture different from the California mug shots? Would exhibiting this be considered bad taste, kitschy, lowbrow? Is it because the horrific crimes John Wayne Gacy committed are still too tender in our collective conscience? Does knowing what he did give the images a negative charge, make them profane and unworthy of our aesthetic or sentimental appreciation? What about one hundred years from now? Will the wry grin seem jocose instead of pathologically maniacal? Will irresistible aesthetic impulses and empathetic nostalgia lure us to a humane reading of Gacy, fostering a new mythology like the ones surrounding murderous mobsters from the U.S. prohibition era?

I am not suggesting we weigh the gravity of Gacy’s crimes against unknown crimes of forgotten individuals from the late 19th century, but rather, further the discussion about what constitutes art (as in these photographs), and the mechanisms directly influencing our attachment and detachment of meaning to it. I suppose the central question is what are the preconditions that factor how we engage subject matter, as it gets mediated and filtered to us through institutions like SFMOMA?

One hundred and thirty-eight years after the California mug shots were made, stripped from their original context and brought to bear in the halls of art and high culture, what history, what story, and what value do they contain? Liberated from the official filing cabinets that once housed them, are the subjects forgiven, free to be gazed upon as sentimentalized miscreants with stories to tell from another time? Less as demonstrable factual evidence used for social control (as aided by photography), now templates for our own constructed mythologies? How then does “fact” become myth, and vice versa?

These are complicated questions, and well beyond the scope of this writing. In the end, I doubt most people really care about historical or contemporary mechanisms of state control, or the cloaked and decentralized powers that influence how we make sense of reality. It’s definitely not until I engage in activities like this writing that such concerns play out in my own consciousness. I think it all comes down to human nature and the ways we express our desires culturally, how they find their way in and out of all our institutions, creating a continuum for the construction and deconstruction of meaning as it serves a necessary understanding of reality. In the end, it would seem, mythology is alive and well, it just depends on how we see the facts.

John Davis is an artist living in San Francisco who works primarily with film and sound. His work was included in the SFMOMA exhibition Long Play: Bruce Conner and the Singles Collection last May.