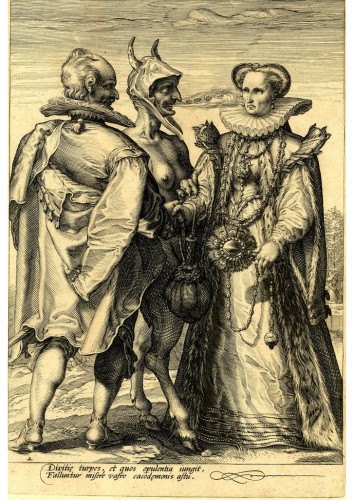 “can I devil worship with the new iphone?? LOL”
—Kanye West

The 1850s were a good time for Satanism in France. Riding the rising tide of the Second Empire, French intellectuals praised the virtues of cynicism and rebellious confrontation. This fluorescence of Satanic devotion was influenced by a nuanced poetics of Satanism in England: Milton’s Paradise Lost and Byron’s poetics of heroism. Already in those authors we can detect a paradoxical understanding of Satan’s significance. Robert Southey, for instance, called Byron’s group of poets the “Satanic School” and described their poetry as characterized by “a Satanic spirit of pride and audacious impiety.” Byron loved it.

Satanism in France shows the same dichotomy. The fact that Satan is “evil” is well known. But the association of Satan with rebellion, pride, and courage complicates that picture of pure evil. Perhaps the most developed and dynamic material in praise of Satan can be found in the work of the poet, translator, and art critic Charles Baudelaire.

Baudelaire’s Satanism is famous, or infamous. His life’s work in poetry, Les Fleurs du Mal, was banned by French censors as an insult to morality. 20th-century critics of Baudelaire, however, seemed to rebel themselves against a reading of his work as actually advocating evil. Enid Starkie’s biography of Baudelaire takes great pains to resuscitate his poetry as moral and spiritual. Walter Benjamin writes, “Baudelaire’s Satanism must not be taken too seriously.” For Benjamin, Baudelaire’s poems for Satan were expressions of a radical nonconformity — and that’s all.

Yet we are talking about Satan, and a poetry which portends towards devotion to the Satanic. Satan and Satan worship, of course, embody a range of signification. The idea on one hand that Satan should be identified as the author of all treachery runs up against and alongside the view of Lucifer as the victim, the one vanquished by authority. Along a different train of thought, some French writers in the 1850s associated Satan with the ruling classes, to the delight of Karl Marx, for instance.

The political precariousness of 1850s France enabled the resurgence of Satanism. In material terms, Satan in the West repeatedly finds itself available for invocation by whatever regime in power, to associate anything which might resist that power with religious infidelity and error.

You know, in the spirit of full disclosure: I’m usually not your go-to person for things spiritual and occult. But in 1988 I was entrenched in wizardy. I was ten, and one Autumn I became intensely interested in witchcraft and the dark arts. As is well known the trope of the “witch” is a frequent occasion to invoke Satan, historically in order to justify the mass murder of poor women. The town I grew up in was tiny, Christian, quasi-rural and neglectfully educated. So I read the whole shelf at the public library dealing with witchcraft and black magic in no time at all, and soon enough I was asking the kindly librarians to assist me in my quest.

That year we had to give book reports every couple of weeks, and as I was reading nothing else but books on black magic, witchcraft, and devil worship, I had no choice but to summarize the materials I was reading. My peers weren’t having it, exactly, nor was my teacher. I hid the materials from my parents, but that didn’t stop some teacherly intervention. One afternoon when I begged my aunt for a ride to the library, she agreed only on the condition that I stop checking out books about black magic.

The 1980s in the United States, under totally different sociopolitical conditions than the 1850s in France, were also a fabulous time for Satan. Born in the 1960s (the laboratory of rebellion), Satanism began to attain a secular, liberal, rationalist meaning. By the ’80s, however, that appeal to liberal rationality was fully assimilated by mouthpieces of “morality” into the general purview of evil. Geraldo Rivera’s prime-time special on devil worship conflated the entire range of Satan’s significance, in a way, associating the secular bureaucracy of Anton Lavey, the working class “malevolence” of Ozzy Osbourne, and death row inmates convicted for killing their parents “in the name of Satan.”

One popular signification of “the devil” conspicuously absent in Geraldo’s program is, of course, the American cultural understanding that the white man is the devil. A reading of devilishness as candidly evil rather than spiritually rebellious. This association was not absent in the rap music of the era, abundant as it was with praise for the progressive social vision of the Black Panthers and the politically affirmative theology of the Nation of Islam.

To some extent, as explicit political resistance faded from mainstream rap music in the 1990s so did the devil. Which provides the backdrop for the curious resurgence of Satanic imagery in the work of Kanye West. On November 22, the long-awaited new album, My Beautiful Dark Twisted Fantasy, will be released in the United States. Satanic imagery indeed proliferates in the songs themselves; West has also frequently referenced Satan in his Twitter pronouncements, such as the one above.

The ways in which West uses Satanic imagery in this new work are multiple. Sometimes he’s Satan (“my eyes more red than the Devil is”). “Devil in a Blue Dress” evokes the night as “the magic hour” in which proper Christian behavior gives way to libidinal temptation. There’s an insistence throughout concerning the process by which mainstream media “demonizes” West, and really the African American celebrity generally. Another set of images suggests alcohol and drugs as the devil, sounding precisely like Baudelaire’s spiritual self-torment. 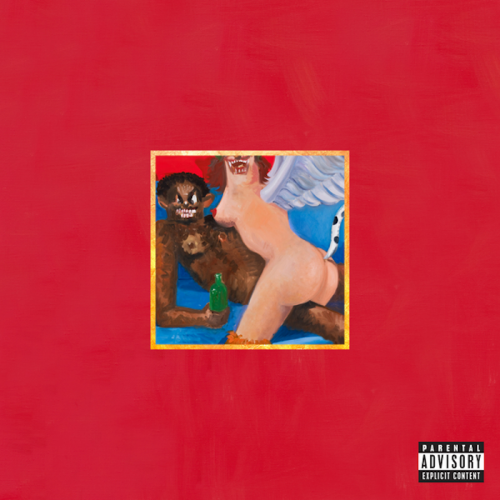 Moreover, the cover art for the album is a painting by George Condo, depicting a black man with a bottle in his hand (ostensibly West himself) having sex with a white woman/bird hybrid. The demon faces the viewer with a decadent and boastful glare. On the one hand, it’s rebellious in the sense that it disrupts racist expectation of homogenized sex. On the other, it seems to explicitly contrast the important trope by which the white man is the devil.

“Audacious impiety.” My plan for Autumn is to delight in the audacity, impiety, and complexity of My Beautiful Dark Twisted Fantasy. To sniff deep the smell of the sulfur and the brimstone. To dance while doing it.