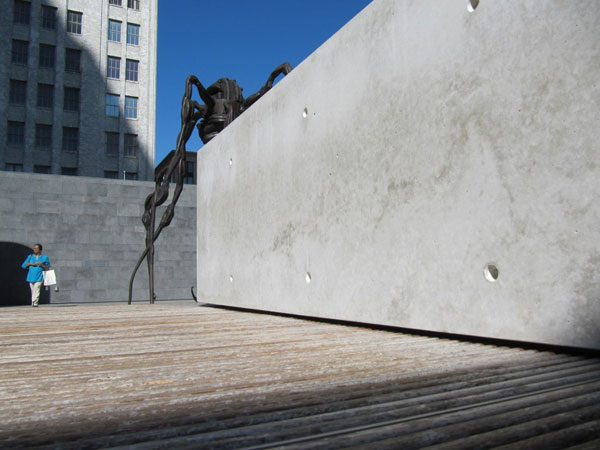 Thank you, Ken Yee (aka yuweiquan), for capturing this!

Plus, Ken has quite the story behind his trip to SFMOMA that day:

I wanted to check out and attempt photographing something I had observed on a rooftop garden visit from a couple of weeks earlier. I was sitting to the left of the Ellsworth Kelly (with the Louise Bourgeois behind), admiring just how vertical Stele I was when viewed edgewise. I happened to notice that the air around the Ellsworth Kelly was shimmering ever so subtly, and this set the science cogs in my brain spinning — the sculpture had been warmed up by the day’s sun, and the shimmering I saw was the air being heated by the sculpture and mixing, swirling together with the cooler air all around. This is the same thing that makes the stars twinkle, and it’s related to why hot desert roads have a mirage of water on top of them. I totally didn’t expect to see this at the SFMOMA! (Exploratorium, sure, but not SFMOMA)

As you might recall, that day I took the photos, August 25, was one of the hottest days of the summer, and what better day to observe the swirling air than that day? I had a free afternoon — and also a craving for the Blue Bottle New Orleans iced coffee — so I grabbed my camera and a small tripod and took BART over to SFMOMA.

After getting an iced coffee, snapping a few shots here and there, I sat down and played around with the manual focus on my camera, and I took a few shots zooming in on the edge of the Ellsworth Kelly, until I got one where the shimmering, swirly air was visible.

Afterward, I hung out a bit longer, and spent some time admiring the Louise Bourgeois Spider. I find her sculpture fascinating and disturbing all at once. But with the Spider, isn’t it amazing how that heavy piece of metal has such a delicate feeling of lightness to it, as if the points of the legs were barely floating on the ground? Since I had the camera, I thought I’d play around with a few more shots, including shots where it looks like the spider is lurking around a corner, including that one where the woman is walking through the frame.

What I find fascinating about that photo is how so many little things worked together to distort the scale of everything. How I’d set up the camera on the bench top just obscures the ground enough so that the bench top looks like it IS the ground, the side of the planter looks like a much larger structure, and the way its edges define perspective lines makes the person (who just happened to walk through the frame) look much much smaller than the sculpture, which looks huge in comparison (and I’m lucky the autofocus setting was for a wide range of distances, too). Because the camera was at seat-top level, the perspective is different than what we normally see, with our eyes a few feet higher, and I’ve always admired this effect. And it was the time of the afternoon where the light starts to get magical, and the lowering sun casts lovely diagonal shadows all over the place.

We choose the Flickr pictures of the week from anything tagged “SFMOMA.” You tag, too!