On Thursday, December 2, at 7 p.m.,  Joanna Szupinska and I will host a screening and discussion of “Riot Show,”  my archive of recordings of crowd violence at rock concerts, in the Koret Visitor Education Center at SFMOMA. Looking forward to that event, Joanna and I talked through the origins and various forms of the project over the years, and she put my rather fragmentary spoken thoughts into written form, as follows.

The Riot Show collection has its origin in 2005, but I was aware of two riot shows before then, through the myth culture around punk and rock music. I knew of the Public Image Limited riot, which members of Sonic Youth had released as a 7″ bootleg in the ’80s. And while I was a member of the punk collective Epicenter Zone I’d come across a bootleg of a Black Sabbath riot from 1980, which was released on vinyl in 1998 by Khan and Lary 7. But these bootlegs were more rumored than heard in those years. 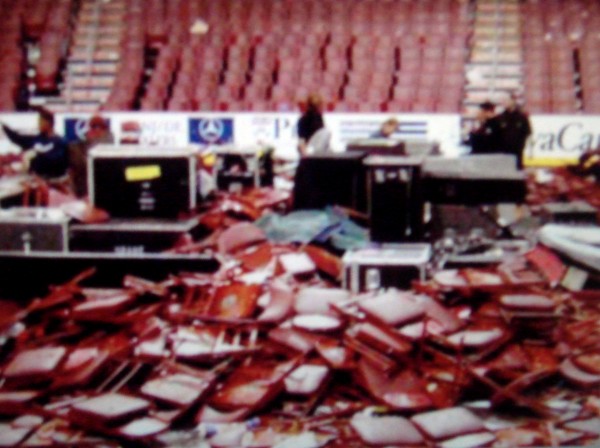 In the early 2000s, these recordings became available through peer-to-peer networks, and I was finally able to hear them. So I became interested in the qualities of the actual recordings, and the stories they told. Conversations with my friend Chris Golden led me to two more — a recording of Suicide, that had been released as 23 Minutes Over Brussels, and Morrissey’s video Live In Dallas. And then I found a video of a riot at a Guns N’ Roses concertin 1991. So these five recordings suddenly formed something like a coherent collection, and I’ve added more over the years.

I first presented the project publicly in 2005, in connection with an exhibition called The Backroom, which was organized by Kate Fowle, Magalí Arriola, and Renaud Proch, in the space that would later become the Mandrake in Culver City. It’s since traveled to San Francisco, Paris, Mexico City, Orange County, and New York City. The Backroom focused on artists’ and writers’ collections — things they kept in the “backroom,” as resource material or objects of fascination not necessarily connected to their primary, or “front room,” activities. I showed the archive then as a straightforward presentation of material, without much framing or any attempt at entertainment or education. I just played through the recordings as readymades, with whatever qualities they had. I remember the small crowd included Michele O’Marah, whose videos come from a similar attitude, and curator Jenée Misraje brought the artist Christoph Büchel, whom she was working with at the time. He threw a full beer at me, which I thought was a fair response.

The title for the archive was borrowed from the trading culture, where it denotes simply a show where a riot happened. But it’s assumed more meaning over the years. I’ve come to understand the recordings as the convergence of an action by a crowd, and practices of mediation and display. Each of the recordings contains those shared aspects: a concert, a crowd that stops the band from playing, the crucial presence of a recording device that can take in the scene, and the idea of trading or exchanging that recording. Not only did some relationship break down, but someone was interested in recording it, and someone else was interested in looking at it.

From the beginning I made a rule about Riot Show, that it should be flexible, easy and fun. I would share it whenever I was invited, and I would prepare it to fit any given context. So Riot Show has taken the form of a podcast, a zine, a playlist, a single-channel video, a lecture, and a listening station in museums. When Kristina Lee Podesva asked me to write something more substantive for Fillip (whose editors took part in a recent Open Space event), according to my rule I could not refuse. The essay I wrote for Fillip elaborates some of the historical and theoretical aspects that have surfaced during Riot Show’s presentations over the last five years, including questions about spectacle, crowd politics, and media culture.

That essay felt to me like a resolution. I’d said what I had to say, and it’s out there on the web and in the publication for people to read. So for Open Space, we thought it would be interesting to open the archive to people from different backgrounds and disciplines to see what they’d make of the material. We asked people with whom we have existing, good conversations, and their expertise bridges anthropology, urban studies, film theory, and exhibitions, among other things.

That four of those we invited come to the U.S. from elsewhere is more or less a coincidence, but it raises the question of the “Americanness” of the riot show phenomenon. Though I do have recordings from Israel, Belgium, and Zimbabwe. For instance, as a post-colonial thinker, Tarek El Haik reads riot shows as evidence of explosions at the heart of a particularly American spectacular economy. From this perspective he finds them fascinating, and somehow encouraging. 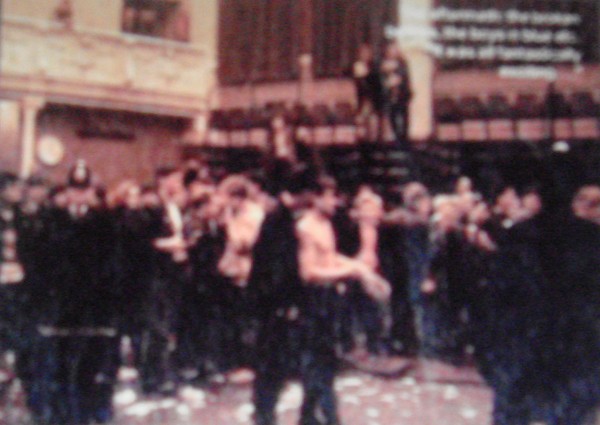 By contrast, Erica Levin (whose essay is in the catalogue we edited for the Wattis Institute’s exhibition We have as much time as it takes) questioned whether I might be aestheticizing the crowd violence in the recordings, as the Futurists loved war and modernization. She’s riffing on the anti-Futurist provocationI posted on Open Space last year. I’m still thinking this through, and I hope it’s something we can talk about more. It’s true that I’m encouraged that people aren’t just passive consumers all the time. But mine is not an uncomplicated celebration. For example, no actual political resistance emerges from these interruptions, and even if it did, I don’t presume it would be a politics I agree with or am sympathetic to. Realistically, it wouldn’t be. Indeed it’s more often a matter of a crowd’s anger about getting value for money spent. If the audience doesn’t like the show that they paid for, they’re going to exact value by destroying something — the band’s equipment, the venue, or whatever.

I’m also interested, as Erica allows, in the moments of uncertainty that come into view when a crowd frees itself from rituals of spectatorship and consumption. Jean Baudrillard considers a similar moment of uncertainty in his book For a Critique of the Political Economy of the Sign. He describes a situation in which political activists take over a U.S. department store, declaring that anyone can take anything they want. Then something strange happens. No one seems to want anything anymore. Baudrillard takes this reaction as evidence for what happens when the forms of value and codes of behavior that permeate capitalist culture are momentarily abolished. If everything is free, then we have to decide anew what it is that we really want. That decision may be doomed. Consumerism has structured everyone’s desires, and there aren’t many images of a different way of life to embrace. But for me there’s a captivating pause in the recordings, when anything, any course of action, still seems possible.

And then there’s our conversation — joining in with the fans, watching the recordings and talking about them. This has a value distinct from spectacular consumption, too, I think.