Irruptions of the Marvelous

Mark Dion, the environmental and conceptual artist, has a major exhibit in the Bay Area for the first time in more than a decade. His latest project is on view at the Oakland Museum until March 6th next year. 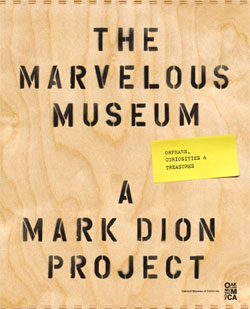 Dion’s trademark gesture is to go “backstage,” as the sociologist Ervin Goffmann would have put it, to the sites of production of official and institutional knowledge. His practice is to make art that reveals the heterogeneous context of discovery. The making and presentation of knowledge turns out, upon investigation, to be rather a messy and subjective business. The directorate of the Oakland Museum, as part of a fundamental rethink of the collections and their civic purposes, courageously let the artist loose in their storerooms, which were packed, so to speak, with many long-forgotten and some never-accessioned objects. Right up Dion’s alley.

His current Oakland exhibit consists of an unlikely series of “orphans, curiosities, and treasures,” selected by Dion from the museum vaults, ingeniously interpolated and set resonating with the permanent items in the refurbished galleries to uncanny effect — inter alia, an auratic doughnut-shaped piece of Yapese stone money, a model windmill, a jadeite boulder from San Benito county, an architectural fragment made of rope rescued from the Tubbs Cordage pavilion at the 1915 Panama-Pacific International Exposition, a 1953 coaster derby vehicle sponsored by the Langendorf United Bakeries. For the observant, Dion’s chosen pieces are marked off from the regular display both by the style of labeling and the mode of their mounting. In addition, Dion has constructed with meticulous fidelity three curatorial offices corresponding to the three floors/divisions of the museum — the cluttered working spaces of a 19th-century naturalist, a 1970s history curator, and a contemporary art curator (which the Senior Curator of Art René de Guzman periodically inhabits, or so the rubric claims). 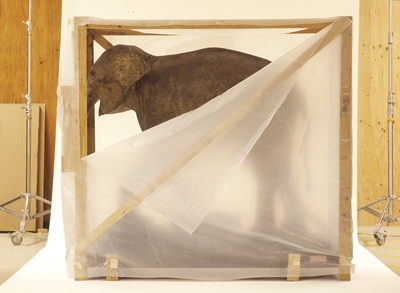 Mark Dion’s path to this idiosyncratic line of work goes back to the early ’80s, when he arrived in Manhattan to study art and the biological sciences just as a remarkable essay was beginning to circulate among friends and readers of the New York journal Social Text. It was a piece about the Natural History Museum in Manhattan, written by a historian of science, Donna Haraway, who had studied the metaphors that organize scientific theorizing and was then turning her attention to the sexist, racist, and colonialist presuppositions embedded in the life sciences and literally built into the dioramas and displays at the Museum on Central Park. “Teddy bear patriarchy: taxidermy in the garden of Eden, New York City, 1908–1936” uncovered the latent ideology in the exhibits, and by showing how natural history museums reveal the ways in which nature is constituted through cultural lenses, helped to inspire a whole new field of critical museology.

For a time Dion’s life as an artist with an interest in expanding documentary practice was pursued quite independently of his amateur passion for natural history and collecting insects and curiosities. It was when he began reading in the space opened up by historians of science such as Haraway and Stephen Jay Gould, that, as he said in an interview with Miwon Kwon, it “became very clear to me that nature is one of the most sophisticated arenas for the production of ideology. Once I realized that, the wall between my two worlds dissolved.”

At that point Mark Dion could begin to answer the question: what kind of critical art practice is possible for a working-class New England boy who loves bugs and botanizing (especially the paraphernalia of zoological knowledge production), and obviously feels the dangerous tug of identification with those Victorian naturalist-explorers who shot, trapped and stuffed their way through the realm of nature. For example, Alfred Wallace, Darwin’s co-discoverer of natural selection, killed and crated a staggering haul of more than 128,000 animals of the East Indies for the cabinets, laboratories, and museums of Europe. 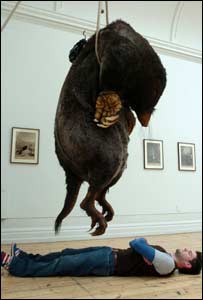 Dion’s chosen territory lies at the meeting ground between institutional critique, the new history of science, and environmental politics. He recognized that “the ecological movement has huge blind spots in that it is extremely uncritical of its own discourse,” a dangerous condition that the Welsh critic Raymond Williams diagnosed long ago in a talk at the ICA in London, which he began by stating that “the idea of nature contains, though often unnoticed, an extraordinary amount of human history.” Moreover, human conceptions of nature are constituted through categories that carry normative force; if you want to “develop” a wetland, call it a swamp; if you want to save a jungle, call it a rainforest. Very often human hierarchy is read into nature in a way that is absorbed without our noticing — animal “kingdom,” sequoia as “monarch” of the forest, “master” gene, and on endlessly. In general, how the environment is conceived — whether as commons, or animate, or gendered, or sacred, or benevolent and so forth — is crucially implicated in the sanctioning of a whole range of human institutions and practices, such as the private ownership of land, deforestation, mining, vivisection, taxidermy, gene-splicing.

Dion’s last major show in the Bay Area — his 1998 installation at the Yerba Buena Center for the Arts, entitled Where the Land Meets the Sea — was in part a translation to California of a corresponding 1992 New York exhibit, but with a different menu of fauna and flora. In a West Coastal context, Where the Land Meets the Sea evoked the Monterey laboratory/museum of “Doc” Ricketts, author of Between Pacific Tides, a classic of marine biology. John Steinbeck, who became Ricketts’s friend and partner in the grandiosely named Pacific Biological Laboratories, said that Doc’s lab was “as strange an operation as ever outraged the corporate laws of California,” a bewildering shambles of a place (that Dion would have relished) with its deep litter of specimen jars containing “the lovely animals of the sea, the sponges, the tunicates, anemones, the stars and buttlestars, and sunstars, the bivalves, barnacles, the worms and shells, the fabulous and multiform little brothers, the living moving flowers of the sea,” not to mention dozens of cages of rattlesnakes and mice awaiting onward shipment to labs across the country, holding-tanks for squid and octopi, embalming equipment, dissecting trays, microscopes … all the tackle of a working marine biologist. 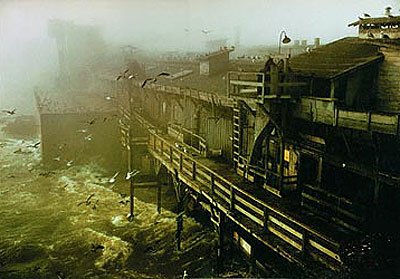 Part of the magic of Cannery Row lies in Steinbeck’s ability, albeit in a sardonic register, to evoke the sense of wonder induced by encounters with nature’s cornucopia, evident in children’s love affair with the intertidal zone. In a series of magisterial essays and books, the historian of science Lorraine Daston has rescued the category of the “marvelous” from the condescension of contemporary science. She has shown how central was the prodigious, the singular, and the uncanny to the practice and imaginative life of early modern scientists such as Robert Boyle, the “father of chemistry” and seventh son of Ireland’s first capitalist, the Earl of Cork. Somehow modern science has to be grasped as the fruit of both wonder and reason, the grafting of the sensuous pleasure in observing marvelous particulars with the crude empirical demands made upon the handmaiden of capital and empire. The technical offspring of this marriage is nowhere more evident than in California, and nature has been the loser.

A few doors along Cannery Row from Doc Ricketts’s laboratory, Knut Hovden, an ingenious graduate of Norway’s National Fisheries College, was devising the mechanization of the small and sustainable sardine industry. He immediately (in the 1920s) went about inventing new purse-bottomed nets, impounding pens, automatic cookers, and can-soldering machines. In what amounted to marine strip-mining, the new extractive techniques caused, within Hovden’s own working lifetime, a holocaust of Sardinops caeruleus, the silver harvest that thrived on the plankton upwelling off Monterey Bay, whose underwater canyon walls plunge 10,000 feet. The protein-rich sardines, mass-produced in Fordist style in the early forties, went to feed the huge American armada in the Pacific theater, while their reduced entrails were trucked north to fuel the emerging poultry factories of Petaluma. Chicken wings have become a banal staple of the median American family dinner, but Dion’s Department of the Marine Animal Identification of the City of San Francisco (Chinatown Division) netted rarer specimens, endangered (thanks to niche marketing) by a global yuppie class which has developed a taste for high-end exotica, stimulated by the flourishing journalistic genre of gastroporn.

The story of Cannery Row — its birth, its mythification by Steinbeck, its death by grotesque overfishing within a couple of years of the novella’s publication, and later its rebirth as a theme park — is a sad epitome of Californian environmental history. We are only now beginning to comprehend the full dimensions of the ecological and human catastrophe that followed 1849 and the invasion of the goldfields; its effects were felt — are yet being felt — not just in the immediate hinterland of the Bay Area, but all along the Pacific littoral, home to many peoples, and as far away as Hawaii, where the sugar industry, headquartered in San Francisco, shattered the island ecosystems.

The pre-history of the Oakland Museum reflects this atrocious past, since one of its three founding collections was essentially the trophy rooms, preserved by the taxidermist’s craft, of Henry Snow, a big game hunter and friend of Teddy Roosevelt. In 1922 Snow donated his vast morgue of stuffed animals, as well as 50,000 birds’ eggs, to the city of Oakland; he was not pleased to learn that the rooms of his new Museum of Natural History were too small to accommodate the three white rhinos that were his chief treasures, or that the ceilings were too low for the mounted giraffes. Only two of the fifty tons of African megafauna went on display; eventually, of course, the Snow Museum became a moth-eaten embarrassment and the collection disposed of, except for a few animals. 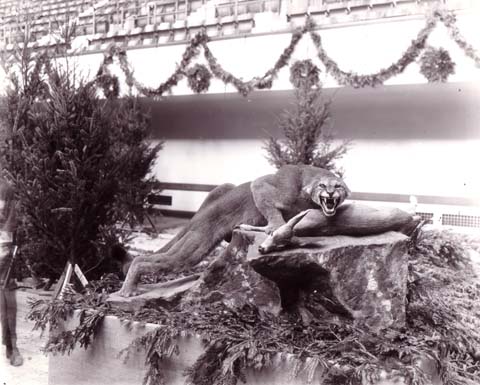 The old arrangement of the Oakland Museum — nature on the ground floor, history on the second, and art, transcendent, on the third — militated against any serious conversation about the anthropogenic causes of the ecological crisis within the tangled history of California, or about aesthetic responses to it. When the natural history section reopens, marking the conclusion of the $62 million makeover of the institution, we shall find out whether Dion’s rummagings have helped the curators reconceptualize the role of a 21st-century city museum. The relentless infantilizing of the public, abhorrent to Dion, seems at least to have been halted. His parodic restaging and mimicry of the cluttered spaces behind the front of official knowledge and its agencies gently invites the visitor to take a critical distance from all productions bearing an institutional imprimatur. This level of reflexiveness alone makes “The Marvelous Museum” (and the sumptuous catalog) a rare curiosity, indeed a treasure.