Conrad Ruiz, Young Jeezy, and The Biggest Watercolor in the World 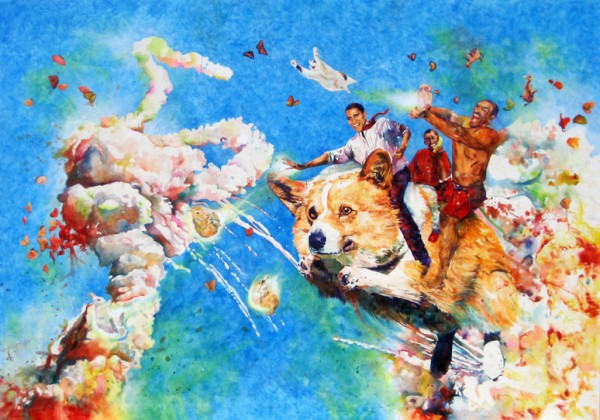 Several times a year I find myself on the CCA campus in Potrero Hill to attend readings presented by Small Press Traffic in Timkin Hall. Those visits always entail the long and drafty walk down the broad corridor, whose walls are always populated with student’s works. Historically I’ve been too absorbed in bliss, ambivalence, or despair about the reading I’m about to see to have paid enough attention. But one night early last year, my friend Chris directed my attention towards a stunning work. We stopped together, and slowly a small crowd of poet-types gathered with us to check it out. That piece was Overload, a painting by Los Angeles artist and CCA graduate Conrad Ruiz.

Seeing the painting in March 2009, the residue of the media orgy which consisted of the presidential campaign, the Obama election and inauguration was quite fresh. Overload doesn’t decline the invitation to total hypertrophy and specular excess. If anything, it glorifies that excess. And in a way that’s, you know, fucking funny. Today’s not the sweetest post-Election Day, but once again I’m reminded that electoral politics are our secular version of Greek dramaturgy in terms of both content and in the competitive structure of those plays. I want to play on “play,” because a critical gesture of the painting is the appropriation of political imagery and the transformation of that imagery into play.

The play is nuanced, and in a way deadly serious. Obama rides a corgi, which I read as a citation of the non-stop heart-thumping pulse-racing thrill ride of the campaign—but also, the corgi is the dread Cerberus of British state politics. The men depicted in Ruiz’s work are frequently carrying weapons, although in many instances the weapons turn out to be toys: squirt guns and the like; in this case, the violent discharge from Obama’s palm turns out to be…bunnies. The adjacency of violence and play is insisted upon in his paintings. Smiling faces and automatic machine guns. You know how Coleridge says somewhere that “the stiletto and the rosary often come out of the same pocket?” Like that, for the post-Jersey Shore era.

Which brings me to Young Jeezy. I’m still hoping to catch Jeezy’s work in the hallway of CCA, but I have often thought of his jam “My President” in a real relation to Overload. Jeezy absorbs the Obama propaganda machine into a dazzling demonstration of hip hop braggadocio, both fiscal and surreal. God, as a tangent, can you imagine if Obama had won the election in 1988? My head spins fantasizing about the range of response from Golden Age hip hop (think Public Enemy) that would have ensued. Jeezy’s joint, recorded in 2008, appears finally as a prophetic text that emerged as the first and most central response to the election. As a sort of proof, when Jay-Z was called upon to release his official statement about Obama’s victory, he simply remixed “My President.”

In “My President,” Young effortlessly appropriates the historical fact of Obama’s candidacy into play, turning the surface of the media object “black president” into a stable of pure colors (his president is black, his lambo his blue, he’ll be goddamned if his rims aren’t too), as if color itself, wrenched from the object, could signify an excess of value. The range of association goes far afield of its thesis, from the absurd (“I will e-mail Jesus”) to the irrelevant (“I love me some spinach dip / I’m addicted to Houston’s”). But on the other hand, there is a moving miniature describing cyclical poverty as a result of institutional racism. The piece can’t be read as simply surrealist or approached with smug irony. And yet it also isn’t exactly a coherent piece of political art.

Which is the point, actually. Both Ruiz and Jeezy have a complex and subtle take on the “political.”  It’s the way they traffic in its specular flora and fauna which shows that such imagery may be all there is. I was recently at a panel on poetics in Reykjavik, Iceland (long story) and the first question had to do with the question of poetic form and politics. The Swedish conceptual poet Pär Thörn opened that discussion by wondering if the term “politics” was even the relevant term for departure, if we weren’t in fact far past politics and in the realm of total administration. The difference between Jeezy and the fantasy texts of Chuck D. or Rakim.

In Fontana, CA, Conrad Ruiz is painting the largest watercolor in the world. The Spiral Jetty of the post-Gossip Girl era. Ruiz describes it as a “disasterpiece,” portraying Bay to Breakers, Critical Mass, and a destruction derby all happening at the same time during a massive earthquake “and everybody is having a good time…except for those who are dying.” Relative to the image of sovereign violence in Overload, the disasterpiece shows the catastrophic entropy of “natural” disaster–not unrelated at all, obviously.

The scale of the project is not so dissimilar from the nuances of contemporary rap in either scale or content. In the intro to “Mr. Carter,” Lil Wayne intones “I feel big…not big in the sense of weight, like gaining weight or anything like that…but like colossal.” Ruiz himself cites Wayne in the Future Shipwreck video, and his oft-repeated claim to be the “best rapper alive.”

In terms of what it shows, and how Conrad describes his work in this video, the repeated association of violence and play is perhaps the primary trope in contemporary rap and video game culture. Ruiz describes the association in terms of masculinity, punk rock, and gestural violence. This is the truly terrifying and discomfiting part of what the work does, situated as it is inside a culture which perpetrates actual, material, devastating violence against people within its borders and all over the globe. That same culture whose most critical export is its artworks, arguably. Those awesome, brutal, huge artworks.