Sometimes during my tenure as blogger, I will go see Hollywood blockbusters with people and document, in impressionistic fashion, our experience.

I went to go see The Social Network (2010, dir. David Fincher) with the poet and SFMOMA Community Producer Suzanne Stein. We saw the film at the Metreon and then talked about the movie. We talked about it on BART, and then over a beer at Doc’s Clock. 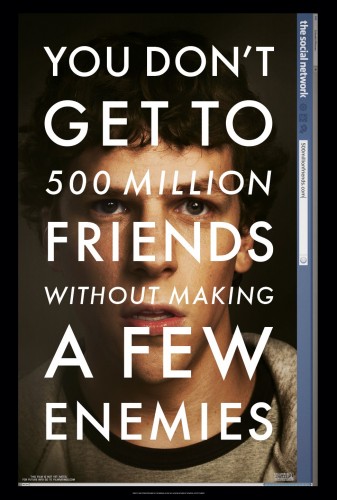 We both thought The Social Network was a really good movie, and we both thought it was funny that we thought it was so good. We talked about the narrative presentation and how nimbly the writers and director avoided having there be a “love interest” or a villain or a hero.

Suzanne said the end of the movie reminded her of Carnal Knowledge (1971, dir. Mike Nichols). I haven’t seen Carnal Knowledge, but I’ll try and summarize for you: Jack Nicholson’s character floats from woman to woman, hung up the whole time on the wife of Art Garfunkel’s character. At the end, Jack Nicholson’s character gets head on a couch. He’s pursued as much sex as possible his whole life yet in the end it feels unfulfilling, his expression blank, just as Mark Zuckerberg looks blank waiting for Erika to approve his friend request. Also, there are a lot of references to fellatio in The Social Network.

I tried to talk about The Ghost Writer (2010, dir. Roman Polanski) but mostly because I had just seen it the night before.

We talked about how there are not really any women in The Social Network. Except that for both Mark Zuckerberg and Sean Parker it’s the loss of a woman, or the inability to possess a woman, that inspires them to their creative entrepreneurial enterprise. We talked about how the real love relationship in The Social Network is between the two boys, Eduardo and Mark. We wondered whether Mark loved Eduardo, or wanted to be Eduardo, or wanted to fuck Eduardo. Or some interpenetrating combination of those things. And then how Sean Parker is the new crush who triangulates everything and Mark dumps Eduardo for Sean. But that their relationship was definitely the central relationship in the movie, which is why the betrayal is so brutal.

We talked about how we had betrayed our friends in our real lives. We also decided that this part of the conversation wouldn’t go on the SFMOMA blog. Meanwhile, we couldn’t remember what else David Fincher had directed. We suspected he directed Fight Club (1999, dir. David Fincher), so we texted Megan Brian to ask her. Megan wrote back that he did in fact direct Fight Club. She also forwarded a text from Stella Lochman, which told us who wrote Fight Club.

Suzanne talked about the rowing scene, which was shot with a tilt-shift camera. We talked about how the effect was making large things (like a huge river with a rowing contest in it) look miniature and the small elements of that scene (the rowers) look like hulking giants. We thought that was one of the themes of the film, how small things become astronomically large. Like how they pay $10,000 to make Facebook and then they sell it for $25 billion dollars. Or how they’re really happy when there are 1,000 users of Facebook and then there are 500 million.

There are a lot of films that are about tortured genius artists who are so dedicated to their art they treat their partners and family members awfully bad so that they can make this genius, crazy art. We talked about how The Social Network was one of these films, and about some of the other films like that. Suzanne has never seen Pollock (2000, dir. Ed Harris) and I never saw Sylvia (2003, dir. Christine Jeffs), but is Mark Zuckerberg the sort of Jackson Pollock or Sylvia Plath of the computer world? And also that Eduardo might be the Sylvia Plath of the computer world. But we also talked about how it was a courtroom drama, and that it was kind of an action film. Mark Zuckerberg is always running, for example. 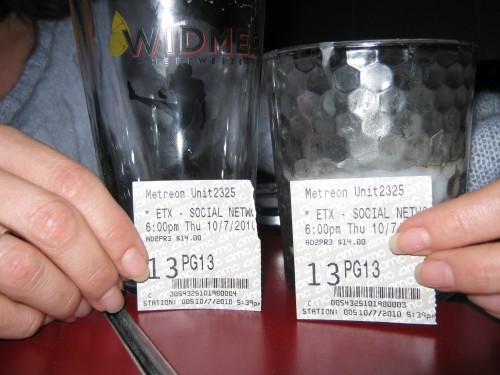 After we left the theater, even though we both liked the movie a lot, we both also felt really misanthropic. I told Suzanne I felt misanthropic. She told me she feels misanthropic every time she looks at Facebook. But we both really love Facebook. Over the bar at Doc’s Clock there’s a sign that says “Follow Doc’s Clock on Facebook.”