The first comprehensive exhibition of the work of Eadweard Muybridge, protean genius of early photography, is coming to SFMOMA next February. It will arrive by way of the Corcoran Gallery in Washington and now Tate Britain, where I caught the show a day or two after it opened earlier this month. Tate Britain in Pimlico is the original Tate Gallery, now dedicated to housing and displaying “British” art (the “modern” and international collection having moved across the river to the refunctioned Southwark power station). The British claim to Muybridge is presumably staked on the accident of “Edward Muggeridge’s” birth in Kingston upon Thames in 1830, a few miles up river from the Tate. At the end of “Muygridge’s” life in the American West, the pioneering photographer returned to England, and “Maybridge’s” remains now lie in Woking cemetery, a mock-Tudor stockbroker suburb southwest of London.

The exhibition’s bland title, Helios: Eadweard Muybridge in a Time of Change, conceals strange objects — the uncanny locomotion studies, the gorgeous Victorian kinematic projector Muybridge dubbed a “zoopraxiscope,” the material traces of his various personas (“Helios” of the Flying Studio, among several) forging a life on the Pacific frontier as book dealer, inventor, murderer, director of the Bank of Turkey, washing-machine patentee, landscape photographer, entrepreneur, war artist, publisher, state propagandist, and pioneer of the frozen and the moving image. He was a man of enormous energies and physicality, charged with a volatile egomania that was perhaps the effect of brain damage; his cortex seems to have been severed in a stagecoach accident in Texas.

The exhibition will give a second wind to Rebecca Solnit’s biography Motion Studies: Time, Space and Eadweard Muybridge, currently the essential source contextualizing his life and work. The Helios show is sure to give fresh impetus to Muybridge scholarship; indeed, already the Corcoran exhibition, curated by Philip Brookman, has triggered a debate over the authenticity of a considerable number of Muybridge photographs. Weston Naef, the recently retired Getty curator and champion of Carleton Watkins, has suggested that many Muybridge stereograms, as well as some of the Yosemite half-plates and mammoth-plate photographs up to about 1872, should be reattributed to Watkins. [See the interview with Naef, and Brookman’s response.] Solnit has now moved to Muybridge’s defense in the pages of the Guardian, arguing that Naef’s attempted hatchet job on Muybridge’s reputation in favor of Watkins is a campaign of innuendo based on “little evidence other than Naef’s standing in the photographic world.”

The possible misattribution of this or that photograph on display will be of less interest than the issues raised by the incontrovertible evidence of doctored negatives, which turns out to have been a completely routine matter for pioneers of the craft. The doctoring was often in several stages — for example, we see a photograph of a painting of a photograph of a horse and rider, with various pastings and touch-ups along the way, all with the aim of an adequate final product, that is, a publishable book plate. Likewise, in the case of landscapes, for perfectly practical reasons, Muybridge and his contemporaries — Carleton Watkins among them — would often cobble together two separate negatives of sky and foreground, each with different exposures, because wet plate technology using collodion on glass produced overexposed and bleached skies.

These manipulations and technical fudgings were, you might say, “innocent” artifacts of the mid-Victorian limitations of plate sensitivity and shutter technology. On the other hand, they do seem problematic in the case of the famous equine gait photographs commissioned by the railway baron and horse breeder Leland Stanford. Muybridge was employed specifically to achieve images that would adjudicate whether all four legs of a trotting horse were ever in the air at the same time, using the camera as scientific arbiter of truth. The early results were desperately ambiguous, and of course, photography’s relation to the real remains a profoundly vexed question.

The Muybridge collection is one of the glories of the visual archives at Stanford. The other is the vast and magnificent deposit of political posters at the Hoover Institution on War, Revolution, and Peace (albeit gathered with counter-revolution in mind). In my days teaching science and technology studies at Stanford, I offered a course entitled “Tools of Persuasion” on the history of propaganda and its mediating apparatus — the printing press, the camera, radio, TV, the billboard, the poster, etc. In general one can say that the powerful prefer one-way systems of communication, the megaphone rather than the telephone, although it is true that today’s apparatchiks have learned to permit, even insist upon, homeopathic doses of feedback and “interactivity” (read: enhanced passivity) via the call-in, the 3×5 card (“Questions only, please!”), the focus group, the … blog. The role of photography in the history of propaganda is very complex, but presumably the reason why the new ubiquity of the phone-camera — facilitating photography from below, subveillance as it were — is proving awkward for the masters of the planet has something to do with the idea of the camera as a tool of counter-propaganda, if not a truth machine.

For that reason, when I would take students to visit the Muybridge archives — not to mention the political poster collection by masters of the propaganda arts (see Le Commissariat aux Archives: Les Photos qui Falsifient l’Histoire by Alain Jaubert for hilarious examples of “before and after” photographs of those being airbrushed from history) — the sight of the doctored negatives never failed to stimulate heated debate about truth and the photographic image. Much later, when the Retort crew sat down to write Afflicted Powers: Capital and Spectacle in a New Age of War, we were struck by the fact that no one, not even the agents of empire, moved to challenge the veracity of the images from Abu Ghraib. And I still wonder why not.

Muybridge’s practice of retouching prompts comparison with Photoshopping and the new technics of image manipulation in the digital age. It perhaps even raises the spectre of the end of photography itself. On this topic the photographic historian Steve Edwards has some interesting reflections at the close of his Very Short Introduction to Photography (Oxford UP) — a gem of a book, although, like a lot of fine introductory texts, best kept away from beginners.

Digital photography originated as a NASA project, to solve the problem of transmitting images remotely from space via radio waves. It has now reached the point where the fundamental features that made an image photographic, namely, traces of light captured by a receptive substance on a film plane, may be lost. This is the danger — or the promise — implicit in full-bore digitization. Edwards advises against panic at the prospect, and quotes Allan Sekula on the matter: the “old myth that photographs tell the truth has succumbed to the new myth that they don’t.” Edwards notes the banality of most Photoshopping, and concludes that the compelling uses of the new digital medium are in the service of a “heightened, disturbing realism.” 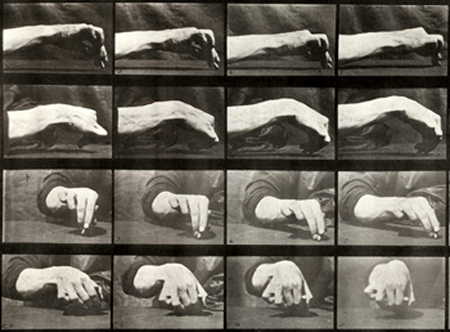 One of the virtues of the Muybridge exhibit and an enduring contribution of Solnit’s Motion Studies is that they help in the recovery of the constitutive conditions of image-making, especially the production of the high-speed sequential photographs that secure Muybridge’s place in the pantheon — the remarkable compendium of arrested gestures belonging to animal and human subjects drawn from stable, clinic, studio, and zoo. As Solnit neatly puts it, the “real subject was not the object but the motion, not the noun but the verb.” Motions, I would say, that far from elucidating timeless scientific truths about the movement of living things must be parsed specifically in terms of that moment of industrial capitalism and mechanization when the horse was being retired from duty as a member of the working class (to be fetishized for the pleasure of a modernizing plutocrat), and when the grids and graticules of a simultaneously frozen-framed and accelerated modernity were being stretched across the globe. Barthes was right to say, in the context of another landmark photographic exhibition,“It is this entirely historified work we should be told about, instead of an eternal aesthetics of laborious gestures”.