Sometimes during my tenure as blogger, I will go see Hollywood blockbusters with people and document, in impressionistic fashion, our experience. This is episode six. 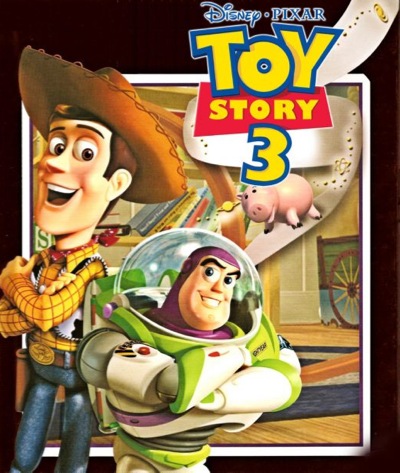 I went to go see Toy Story 3 in 3-D (2010, dir. Lee Unkrich) with SFMOMA Curator of Media Arts Rudolf Frieling. We met at the Metreon, bought tickets, and were given our 3-D glasses. We saw the film in a theater that was almost empty and curiously devoid of children. Then we took BART to the Mission, where we had a drink and ate blood sausages at Schmidt’s.

We talked about how the cinema of the future will really be in 3-D and how, in a way, Toy Story 3 anticipates the normalcy of that. Some of the previews we saw suggest that filmmakers are still exploiting 3-D to make it very obvious and remind the viewer at all times that they are in fact watching a film in 3-D. But Toy Story 3 almost felt like it wasn’t even in 3-D or didn’t even need to be in 3-D. It was “natural.”

Rudolf has seen many Pixar films, and I have seen a few. We talked a lot about an early Pixar short called Knick Knack (1989, dir. John Lasseter.) I had never seen it, so Rudolf constructed the plot for me. Knick Knack concerns a snowman trapped inside a snow globe who wants to break out of the confines of the snow globe in order to pursue a figurine shaped as a beautiful, blond woman by a pool. The snowman attempts to break out using his own nose, dynamite, and several other tactics, all of which fail — but which do cause the snow globe to fall off the table full of knickknacks. Miraculously, an emergency exit door opens, the snowman is free at last but falls into an aquarium, where he rejoices in spotting a wanton mermaid. Just as he is about to pursue the wanton mermaid, the snow globe also falls into the fishbowl, trapping him inside, condemning him to a life of perpetual frustration.

We talked about the recurrent themes of captivity and liberty in Pixar films. And how these films are often quite dark. We both liked the fact that Toy Story 3 showed you how much pleasure the filmmakers got out of making it and how much fun they had creating the film. But we also talked about how, finally, Toy Story 3 is a Disney film and adheres to the formula a little too closely, and that the Pixar-like microplots and subversive narratives deserved a less-than-happy ending. We thought that Pixar really shouldn’t be with Disney. Then I talked about Taylor Swift, and how I always tell people “well, she writes her own songs,”which is true, and terrific, but also perhaps isn’t finally the sole determinant of great art.

It was my first time eating blood sausages, and they were delicious. They were made “Berlin-style” and served with stewed apples and onions, hot and sweet mustard, and potato salad. I learned that they are mostly eaten in the north and you are supposed to drink beer while you eat them. We talked about kinds of meat and how you eat them in Germany.

We were talking so much about Knick Knack partly because we both really preferred the animated short Day And Night (2010, dir. Teddy Newton) to Toy Story 3. Day And Night is a delightful short depicting two characters who represent day and night in the most basic 2-D shadow play. Inside them, as if they were a window into the real stuff in 2-D, we see images of things belonging to day and night. Some things belong to both day and night, like Las Vegas. We talked about how Day And Night also depicted a caricature of frustrated male sexuality and how that seemed to be a speciality of John Lasseter. But not Toy Story 3,which is notably sexless, except for the transformation of Buzz Lightyear into a stereotypically Spanish-speaking Romeo of the tango.