Five questions to SFMOMA artists, staff, or guests. Today’s interviews are with two of the Sisters of Perpetual Indulgence. If you’re from San Francisco, you’ve probably seen them around town, helping charities, hosting events, and bringing joy to the city. I caught up with Sister Selma Soul and Sister Tuna Noodle at one of Rebecca Solnit’s Infinite City events. 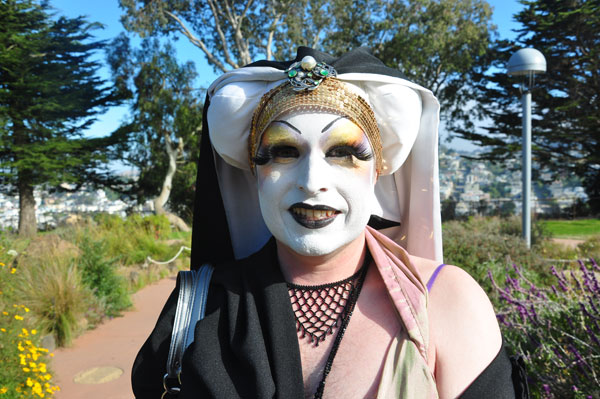 Sister Selma Soul at the Randall Museum as part of the Infinite City project. Sister Selma lives in the Mission and, when not creating a more joyful world while wearing a veil and fake eyelashes, can be found moonlighting as James Bazydola of the Mocas Group Art Consultants.

Sister Selma, there’s the generic interview question that goes, “If you could invite anyone to dinner who would it be?” What I want to know is, who would you invite and what would you serve?

I’d be tempted to invite Marcel Proust and serve madeleines, but then I’m afraid he would just ramble on and no one else could get a word in edgewise.

I’d have to say my dream dinner would include Mark Twain, Dorothy Parker, and Oscar Wilde over a hot and hearty meal of Irish stew or Yankee pot roast on a cold SF July evening with generous amounts of wine.

As a nun I can only justify stealing glances and kisses, so if anything were to compel me to steal and horde it would have to appeal to my baser instincts of pure decadence. In that case I would say the Barberini Faun.

Confidences mostly. Much of my work as a nun happens one-on-one in bars and on the street. There is a great need in our society for a nonjudgmental ear.

An open heart and enough cash for a cab.

What inspired me to become a nun? I became intimately involved with the Order in 1997 through various events, but did not consider becoming a nun until 2001. When the events of September 11th, 2001, occurred I became determined to actively create the world I want to live in and not just be a passive consumer. My experiences with the Order convinced me that becoming a member was a powerful way to channel my skills and gifts in a way to effect change in my community, which I hope will lead to greater change in the world. Since I became a fully professed member in 2002, my community has grown to include the children of the Castro neighborhood, the folks who have made Quesada Gardens in the Bayview bloom, straight women in Fresno, bikers on Harleys from SLO, artists of the Mission, and young professionals on Union Street. Despite all the bad news we read day to day, I have witnessed enough goodness to know humanity has a bright future as long as there are people willing to reach out to one another and find commonality. And if those reaching out happen to be wearing glitter and feathers, so much the better! Blessed be! 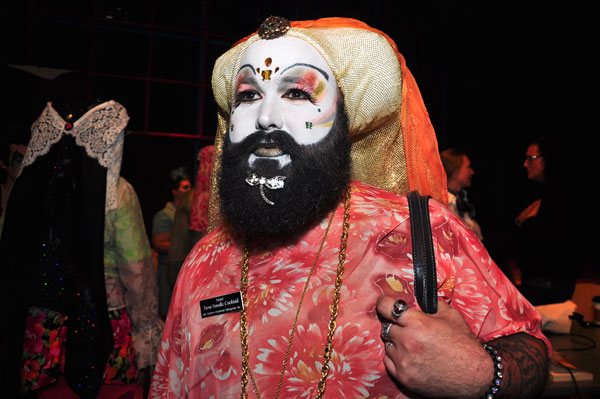 Sister Tuna Noodle Cocktail at the Randall Museum as part of the Infinite City project.  Sister Tuna lives in San Francisco and is a fabulous nun.

I personally collect music. I have a lot of records and CDs. I worked in music retail for a long time, so I don’t buy a whole lot now but I have a large collection. I also collect art. Different kinds of art. I love thrift store art. I have illustrations, poster art, and folk art from people who are known and a few people who are unknown except to me.

When I was reading your blog, I thought about that, and there’s one piece of art I’ve never seen in person but I know that there’s a copy of it. It’s a book, a manuscript by a Flemish artist named Peter van der Borcht that was written in 1595; it’s called the Officina Plantiniana, and it has an illustration in it called the Festival Barge. I want to see it because I have a tattoo of it, and I’ve only seen a tiny portion of it from an exhibit at the High Museum called The Age of the Marvelous. I know there’s a copy of the book in the de Young, it’s in their archives. I’ve written to them a few times to try and schedule a viewing, and I’ve never heard back from them. So I probably just have to go steal it.

I mostly listen to either NPR online or one of my favorite web radio stations, called Pig Radio — it’s based in Italy and they play a lot of eclectic electro-dance and even rock, but they will sometimes throw something just really out-of-the-blue in there. You might hear Jimi Hendrix next to LCD Soundsystem next to some really unusual electronic thing. I like it because I can hear a real wide variety of stuff.

I always have a handkerchief. Because you just never know.

How long does it take to do your makeup? It depends. I can do a quick face in 45 minutes, or I can spend 2 hours. I usually find that the quick faces tend to come out best, because you don’t have time to think about it, you just have to do it. And the more time you have, the more time you have to mess it up. So quick is better.

I always pretty much do the same thing. Since I have a beard, I always line my beard so that it looks sharp. I always use eyeliner and lashes. You can mess up, and as long as you put eyeliner and lashes on, it makes everything ok. I finish with a shimmer powder which kind of sets it, and it almost looks like porcelain — it looks opulent and makes it shiny and creates a kind of mask-like effect. I like that, it’s kind of my trademark.

The clown-white is Kryolan, and a lot of the colored powders are from Kryolan, which is professional theatrical makeup. But then I dabble: my eyeliner is Wet ‘n’ Wild. I always use black lipstick and use color on top of it. Every now and then I pick up odd brands, but I don’t typically use commercial brands like Maybelline or Revlon.

[Oops, we learned that Peter van der Borcht’s Officina Plantiniana lives as part of the Achenbach Collection at the Legion of Honor, which is a sister institution to the de Young.]

The Sisters of Perpetual Indulgence are, as Sister Soul put it, “a nondenominational order of queer nuns celebrating 31 years of expiating stigmatic guilt and promulgating universal joy. Founded right here in SF.” They were on-site at SFMOMA and the Randall Museum to distribute Monarchs and Queens, a map detailing local butterfly migration and queer public spaces. That map and many others are a part of Rebecca Solnit’s Infinite City: A San Francisco Atlas.  More here, here and here on her project.