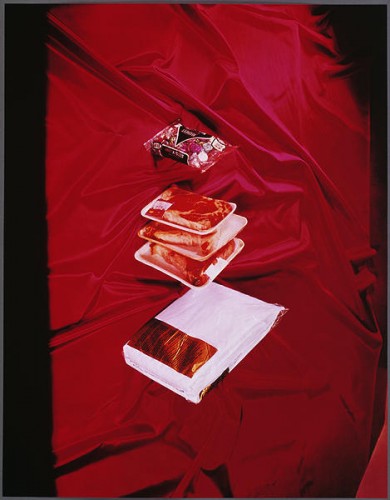 Food for Thought, the show Sabrina Buell has curated at Silverman Gallery, exhibits works of art that approach food as the object of thought, resistant to the mindlessness of everyday encounters with food.

The neurosomatic experience of eating and drinking can provoke so much sensory delight that it often associates with sexual pleasure. This is frequently enough signified by, of all foods, fruits. And indeed several pieces in Food for Thought use fruits, as instances of the colorful and the sweet, but also as objects of critique. This critique is especially evident in Deva Graf’s Navel, which recasts the Edenic story of feminine weakness and malevolent fructification with a petrified orange on a Buddhist altar.

Ed Ruscha’s Sweets, Meats, Sheets is gastronomy in the bedroom. Candies, steaks, and packaged sheets seem to levitate above a lush and sultry red throw. But the consumption of food, and its substantiating a semiotic universe, isn’t unidirectional. We consume food, but food (and “Food”) consume us. Nobuyoshi Araki’s stunning Untitled is placed just feet away and in striking counterpoint to Ruscha’s more playful piece. Untitled shows in stark black and white a nude woman on a jet black plastic or cloth sheet, her head buried in it, pressed into the ground (as opposed to the friendly-ghost levitation of Ruscha’s treats.) A flower sticks out of her raised ass skyward. One insinuation of the image is a warning against embodying careless modes of consumption when encountering the body or the image of bodies.

In some ways, I was most prepared for Araki’s piece when encountering a sign for gyros on the walk to Silverman Gallery. Like Araki’s photograph, this piece of advertising undertakes by highly manipulative means to produce the seemingly naive representation of sexuality and consumption. In this way, it approaches the ineluctable and brutal vicissitudes of pop culture. However, Untitled shows its hand: both by the foregrounded violence of the image and the edge of what resembles a tripod “accidentally” caught in the image. 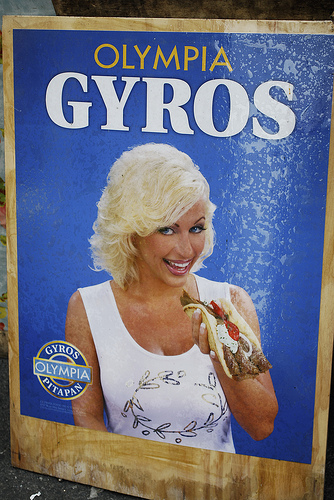 the seemingly naive representation of sexuality and consumption

This is true too for the encounter with what I’ll call “Food” to signify the cultural industry and commodity regime of food deployment. Ruscha’s treats, although they promise endless gratification for our hungry pleasure receptors, are tightly sealed in plastic. This sense of our bodies being manipulated by industrial food production is playfully catalogued in Joseph Beuys’ Food for Thought, part of which is a typed list of “foods:”

Finally, because food and eating belong to the political and aesthetic realms clear demarcations are not found in “pure” or undetermined forms between pleasure and responsibility, between restraint and excess. Susman’s Practice Makes Perfect in some way synthesizes the semiotic vertigo of considering food and its terrible and joyful effects. A plexiglass container at the base has been filled with mint chocolate ice cream, while at one time a child’s baseball uniform appears to have been attached to the wall, along with the green streaks and residue which now remain. The ice cream at the base has undergone molecular disintegration with fascinating, although not totally ruinous, results. Spores and molds dot the surface which has heavily cracked. Seeing online that the baseball uniform had been suspended over the ice cream confirms the sort of “ghostliness” the piece evokes. 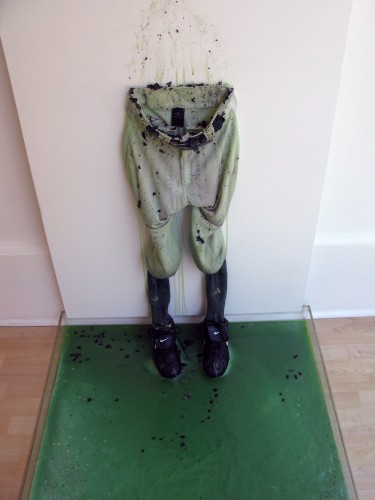 Meanwhile, the flip side of ghostliness is nostalgia, and Practice Makes Perfect to my mind isn’t simply provoking disrepair and loss, but contains within it the real sense of the sweetness of summertime. Of baseball parks and exercise and potentiality and, yes, the sensory surplus that is sweet, cold ice cream on a sweaty, hot day. And this simultaneity of authentic pleasure in a state of atrophy and somatic ecstasy makes me think that Susman’s piece bears some relation to the video for “California Gurls” by Katy Perry, the fairly undisputed summer jam of 2010.

In the video for “California Gurls,” we are indeed subjected to the hyperassociation of sweet food and the female body. But not simply that. In fact, the great paradox of “California Gurls” is that it shows in sharp lines that what we desire most can be the source of our ruination. For a nuanced reading of the very troubling racial relation suggested by the video’s denouement, see here. But for our purposes here, it’s enough to dwell on the paradoxical fact that whipped cream shot as a weapon out of Katy Perry’s breasts has the power to kill candy.