Sometimes during my tenure as blogger, I will go see Hollywood blockbusters with artists and document, in impressionistic fashion, our experience. This is episode five.

I went to go see The Expendables (2010, dir. Sylvester Stallone) with the writer and artist Ariel Goldberg. We met at the Metreon and admired all the vending machines on the way to the theater. We saw the film. Walking out, we gave each other a spirited high five. Afterwards, we took the 14 and had a drink at the Uptown and we talked about The Expendables. 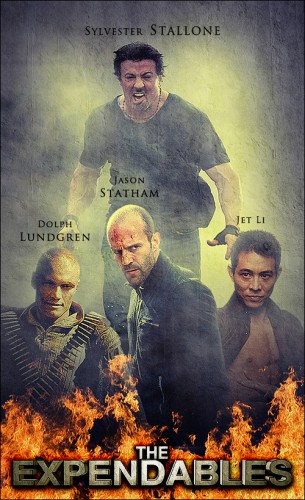 We talked about how Ariel’s dad would have called The Expendables either a “get ‘em up” or a “shoot ‘em up” movie. We talked about how we could call Ariel’s dad to find out but that he was probably watching the last inning of the Yankees game. We decided that The Expendables was like a musical. There were small pieces of dialogue that supposedly drove the plot, but most of the film was given over to a symphonic display of death and destruction.

We talked about the portrayal of masculinity and sexuality in The Expendables. There are essentially no women in the film. There are technically three, but we thought two of them were like swimsuit calendars. One was Mickey Rourke’s girlfriend who almost immediately departs the scene to make him a “six-olive martini” and never returns. The other one is played by Charisma Carpenter (Cordelia on Buffy The Vampire Slayer). Since her character in The Expendables has virtually no depth or elaboration, we’ll just call her “Cordelia” from now on.

There were a few half-hearted but successful attempts at homophobia in The Expendables. In the church when Bruce Willis pitches the mercenary job to Sylvester Stallone and the Governor of California Arnold Schwarzenegger he asks them if they’re going to start sucking each other’s dicks in a mocking way. We talked about how we hoped the Governor of California Arnold Schwarzenegger would donate his salary from the film to perhaps offset cuts to the state’s budget. Another time there’s a reference to some body guard’s “hairdresser,” which probably wasn’t a homosomething comment at all and just about him being bald. We surrendered to a homoerotic reading of the film also being sort of impossible.

The film is all about the simplest possible definition of being a man. Ariel said that it was a good butch research film inasmuch as it reminded her of feeling slight while lifting weights next to the yeah muscles at 24 hour fitness. The men in the film make it a point of pride to have nothing holding them down: no families and no women. There’s only one kiss in the entire movie, between Christmas and Cordelia, and it is really very tame peck, a “honey I’m home….from my month-long mercenary gig in Somalia” kiss. We also talked about how the film was sort of like shopping for a really big—the biggest—dildo.

Much of the action in the film takes place on a fictional island called Vilena. We talked about how this was like a combination of Vienna + Milan. But when I googled “Vilena” right now just to make sure that it was a fictional island and we weren’t going to embarrass ourselves by geographical ignorance, I learned that “Vilena” refers to something else too. (Link sorta NSFW) In any case, we talked about the film combines real life geopolitical catastrophes with totally fictional, composite portraits. In the beginning of the film, the Expendables get ‘em up and shoot ‘em up on a ship overtaken by Somali pirates. But Vilena is kind of a stereotypical postcolonial island ruled by a brutal military dictator…who doubles as an expressionist painter. But it wasn’t really the brutal dictator they were after, it was the ex-CIA operative who had bought his government for control of the drug trade. We wondered, how are the General and his daughter, being artists, challenging the money power characters in the film?. There were lingering shots on sketches tucked onto the interiors of walls and kitchens. And dramatic face paint for the final fight. 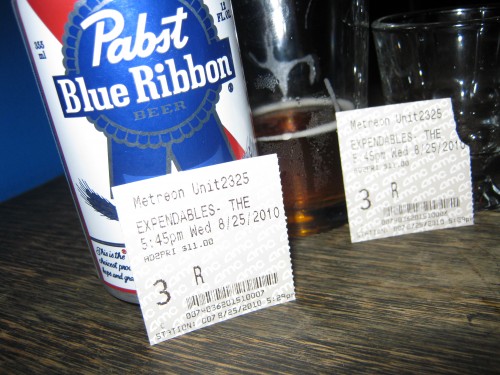 We talked about how all the men who play the Expendables in The Expendables are all former action stars and how it feels weird because they’re too old to be blowing up compounds and blithely throwing knives directly into people’s hearts. We talked about how too the real-life places they discuss: Bosnia, Somalia and the like, were warzones of the 90’s. Just in the way they were the action heroes of the ‘90s. In this way, the film is a comment both on contemporary warfare as well as contemporary cinema from a nostalgic 90’s perspective. We talked a lot about how, no kidding the 90’s are back. How this is uncomfortable no matter how predictable. We talked about how Ariel went to the Riot Grrrl zine show at Goteblud in San Francisco last winter and had feelings of disappointment in her early teenage Jersey self for not being a Riot Grrrl in the actual 90’s and how I became a punk rocker in 1993 and forgot to watch TV or listen to the radio for ten years so recently have been having to watch Buffy the Vampire Slayer and listen to Notorious B.I.G.