Sometimes during my tenure as blogger, I will go see Hollywood blockbusters with artists and document, in impressionistic fashion, our experience. This is episode four. 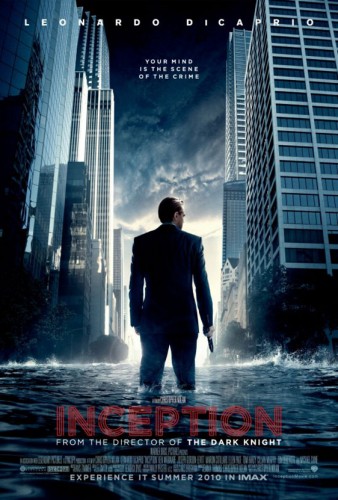 I went to go see Inception (2010, dir. Christopher Nolan) with the filmmaker and curator Konrad Steiner. We met after work and went to the 4th Street Bar and Grill across from the Metreon and had a beer. We talked about Konrad’s upcoming performance at the annual cabaret held at The (New) Reading Series at 21 Grand. It was happy hour. I loosened my tie. We saw the film. Afterwards, we took BART to the Mission and had a drink at Doc’s Clock and we talked about Inception.

We talked about how the motivation for the adventure which makes up most of the movie was barely elaborated. This motivation, which was something like pure capitalist greed suspiciously disguised as honest monopoly blocking, was critical but not really referenced. Like the purloined letter, hidden in plain sight.

We talked about how Cobb (played by Leonardo di Caprio) and Moll (played by Marion Cotillard) were attempting to share a dream. We talked about how it’s impossible to share dreams, how dreams are allergic to collectivity. But that sharing dreams is a model for the love relationship, and how love is one thing that really keeps people together. Bourgeois people at least.

We talked about how dumb it was that they kept describing the idea that you could plant ideas in people’s head as something really difficult to do. It seemed especially obvious to us, especially sitting in the Metreon watching Coke commercials with 150 people drinking Coke. Even in the film they describe inception with words like “viral,” words that we all use every day now.

Konrad pointed out that the editing in Inception reminded him of some of Nolan’s other films, Dark Knight and Memento. That the editing had a wrenching quality. I don’t know much about editing, but I did see Dark Knight with three stoned people in Queens.

Konrad and I decided to include in this post description’s of the last dreams we had which we remembered and wrote down.

In the dream [Konrad’s] i am woken from my sleep by the walls shaking. A few weeks later, this actually happened when an earthquake struck just offshore of SF. Or did that happen first?

My bed is in a dorm type room, but in an industrial type building, in a campus like setting. I have a roommate. I am not sure if my rolling over had caused the flimsy walls to shake, or whether that occurred from an outside cause. We are both awakened and begin to discuss this being woken up. Is our dorm made of corrugated box material?

A knock at the door. A friend, Erika, informs us that there has been some sort of fight between 2 men at a bar, which resulted in a brawl, which escalates into roaming mobs forming. She says she doesn’t want us to “get bashed in our sleep.” But this was what had shaken us awake. She leaves.

Time passes in bed lying awake. Restless, i leave by a back door, with a keycard/ID on a lanyard around my neck. It’s before dawn, damp, but light. I walk paths around the dorm and its graveled grounds. 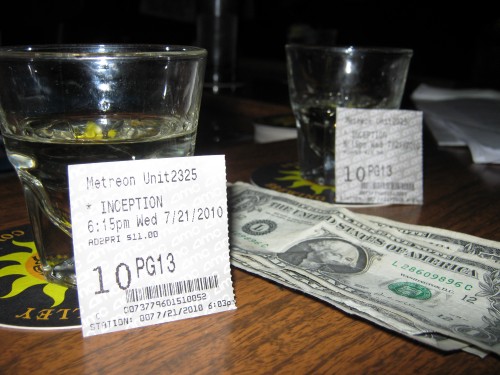 I see a young white woman in streetclothes with a pistol walking slowly along. A black man steps forward out of the entrance to my building. He shouts, “Stop! Put your hands over your head.” The woman draws her gun and they both start running towards me. I freeze.

I am knocked face down then kicked or hit or stomped in the kidneys. Time blurs. I’m still clutching my ID. Will it help or hurt me? It dawns on me that i am now a citizen of a zone where guns have been confiscated and redistributed to volunteer patrols. All this has happened while i slept. The people who just violently arrested me look “straight” or normal. I am concerned about Erika because she looks queer and is sometimes petulant. I think that i pass readily and can hide my feelings.

Then i’m waking up in my bed, thinking about how this dream makes me feel. I must write it down.

I  [Brandon] lived with my sisters who were moving out of an apartment we all shared. One of my sisters had a house guest who was causing trouble, he wouldn’t move out even though they were moving out and I had no relation to him. This house guest turned out to be Big Boi. I started telling him how important his rapping was to Oakland, “as compared to Ludacris or even Outkast.” I walked in the yard after this discussion and felt embarrassed and hysterical. Then I had curated an art show called “Catulluses to Arbuses.” At the opening all of my roommates, which now included my sisters and other friends, were all moving out. I got into a fight with a poet who hates me in real life. Then I threw two yearbooks on top of a moving car and stormed up a hill. But I started having difficulty breathing.

We talked about the monolithic music and how it felt larded on and redundant. Konrad suspects it was a stop-gap—they had too much action and it didn’t merit so much screen time. The music makes it easier. We talked about how the inception was really insemination. We talked about how Inception was similar and different to Steven Spielberg films (family pathos) and films adapted from the novels of Philip K. Dick (more at stake in Dick’s work.)

After the movie, a young woman said, “Best slash worst cliffhanger ever!” This made us laugh. We talked about other comedic moments in the film that made us laugh for various reasons. Like how the whole film could be described as a marital argument between Cobb and Moll, only instead of being about the credit card bill or dishes it’s about the nature of reality and being. And the joke about how hard it is to extradite someone to the U.S. from France, which Konrad wisely pointed out was a Roman Polanski joke.