Five questions to SFMOMA artists, staff, or guests. Multimedia artist Chris Johanson sat down with me for 5 questions while listening to  members of the band the 17th and Capps rehearsing in the next room.  They were all in town for the museum’s Now Playing event in June. Many will know Chris as a San Francisco Mission School artist.  He currently lives in Portland, Oregon. 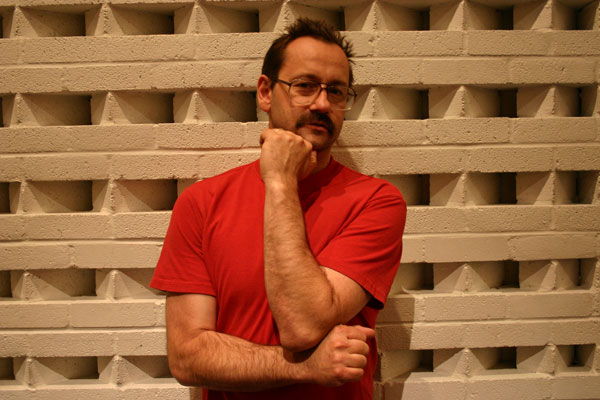 Chris Johanson in the Schwab Room, getting ready for the Now Playing event.

One time I ended up having dinner with John Baldessari, and that was funny, I was just thinking about that the other day, I’m all woah how weird, I’m having dinner with John Baldessari. It was like, this really nice dealer and with these collectors, and me and Johanna [Jackson] ended up at this dinner with him, and I just thought that was pretty cool actually, because I think he’s such a great artist, he has a real generosity and a real way of life, so that was kind of cool. That just made me think about that, but I do have a lot of dinners at my house. Because we have a garden, and we really don’t like to just make art, I mean the way you live your life is like, that’s the art. To me, it’s in the small steps, it’s in the small details of life that makes a life well lived. I think the art of cooking and of bringing people together, that’s just part of the way me and my wife live. So we do have people over. But I don’t think there’s any specific person, I just think it’s people, I guess we like to cook, we like to cook for people, just organic food, we’re not vegetarians but I don’t eat fish because the oceans are graveyards because of people, so I try not to. I don’t really get into that, but that’s for political and environmental reasons really.

In our garden we have twelve blueberry bushes, three grapevines, three kiwi vines, a few plum trees, two apple trees, two pear trees, right now a bunch of green beans, a whole bunch of lettuce, a whole bunch of herbs, garlic, and onions, and radishes, and soon will be tomatoes, and there’s always stuff going, like summer winter vegetables. Kale I really love too, but collard greens, that’s the most magical green out there, because it doesn’t matter if it snows, it’ll survive, it’ll survive a snowstorm up in Portland and just keep going. We had it for five months, it was crazy, it just kept going. Enough to give to all our neighbors and stuff. We don’t have chickens, but if we lived there full time all year round I would do that.

If you could steal any artwork to have up in your home, what would it be?

Okay, then if you could procure any work of art that you would then have to live with every day, what would it be?

There are so many pieces I love. When it comes down to the art, it’s kind of about the energy of the artist that made it. We’ve got some Sister Corita stuff and I just really love those prints. We have this one that’s not even a silkscreen, it’s a lithograph, but it’s signed by her. It’s of the window in her studio, and she had these two sculptures and we were actually at the archive where they have all of her prints and stuff down at the Catholic school down in LA by Griffith Park, and they don’t even know where the sculptures are, they got lost. But this print is of what she saw when she looked out of her window of her studio of these two sculptures. I think that’s like the best piece of art. I just love it, man. She was such a cool person. I think that’s pretty cool. Stuff like that, anything like that. I’m burnt on negative art, I think I like stuff that’s a little more grounded and peaceful.

Morris Louis. If I had like some big minimalist house, it would be pretty cool to look at one of those every day. They’re just so beautiful. I want to know more about that scene: DC art, those pigment wash kind of artists from DC from that time. I wonder if there’s a book on the whole scene. I don’t know much about it, but he was one of them, one of the important people from that scene. I think those are really beautiful. You know, just thinking about art through time. You know, it’s like I don’t think I’d want to live with what’s his name, the dude that killed himself – there are so many – I don’t know, I just think mellow art is where it’s at.

I’ve been listening to that Vince Guaraldi Christmas album. Not lately, two years ago I listened to it everyday, over and over again. You know you learned about it from Peanuts. It’s like the Peanuts music and all those animated TV shows. But there’s something so melancholy about it, and I wanted to know why I felt so melancholy to listen to it, and now I just think it’s so good because life’s melancholy, life’s bittersweet, life’s good and bad. I listen to that. But I listen to a lot of Thelonious Monk. Lately I’ve been listening to Thelonious Monk, the Drunk Injuns, the Wipers, and Kris Kristofferson, and Quasi, and Jackie-O Motherfucker. I’ve been listening to that a lot lately. And all these compilations that Mississippi Records puts out, I’ve been listening to that a lot lately. I listen to a lot of minimalist Jazz, like small, not too horned out. And punk. A little bit of country. Some different kinds of African music from different places there that I got turned on to by Mississippi Records.

Other than your phone, keys, or wallet, is there something that you always carry with you?

Yeah, my asthma inhaler. I always have that with me. I don’t use it anymore really, but I just have it, just in case. And I always have a journal with me. You never know when you’re gonna figure out something to do. But you know what else is kind of fun, I used to always have a journal with me, but then I got into another thing about a year and a half ago where I would just watch the idea come into my life and then hang out with it for a while, and then I’d just let it go. ‘Cause before I used to want to do everything, paint everything, do all these installations, but I don’t think that way anymore. I don’t care like I used to care. And so it’s been really fun to have total ideas for whole shows and just go wow…hang out with it, have a relationship with it, and then go, it’s nice to meet you, bye! I’m never gonna see you again! Have fun out there in the universe of my brain chemistry or the universe, whatever it is. In the electrical blah blah blah! Or whatever the scientists would say. Whatever the brain scientists would say, I don’t know.

What should I have asked you?

One good one would be why do I think this happened here tonight, this event?

I think that I lived here for a long time, and I don’t know why I got to do it, but I know that somebody that’s from my age and from the scene of people I was from would have been asked to do it, you know, because it’s appropriate. There’s so much interconnectedness in the art world, in the SF community, and that’s why I wanted to do this. Me and THE THING, we did this all together, but I wanted to make it so it was totally about the community, this really, really huge group of artists and people that live in SF that have moved on to different places. Some of them still live here, but, you know when there’s ever an art event or art show even if it’s three people, like Me, Will and John, the scene here was just so huge. So many different types of people from all different types of bands, and writers, musicians, photographers, filmmakers, painters, sculptors, video artists, documentary filmmakers, and performance artists. I just met so many rad people here. It’s a big huge thing. That’s why I wanted to show all the videos and stuff. And that’s why the band is made up of all these different people and is playing covers of songs from the 90’s, but they’re playing in Jazz versions. Because it’s about the past and how the past affects the present. Everybody here, everybody from this generation has been affected by the generation before this. I was totally influenced by all the 70’s punk stuff here, the art punk stuff. You know, like William Passarelli, and Flipper, and all the art stuff from the 70’s and early 80’s. It totally influenced me to make the art that I’m making right now. Not really, but it had it’s part. I’m not even from here anymore, but I can’t even do an event down here anymore and not have it be about art history. It’s just such a layered deal. I just think it’s all layers.

You can see Chris Johanson’s Untitled (Figures with black presence) in the museum’s 2nd floor galleries, through the end of the year.  There also much more on Johanson here.