Sometimes during my tenure as blogger, I will go see Hollywood blockbusters with artists and document, in impressionistic fashion, our experience. This is episode two. 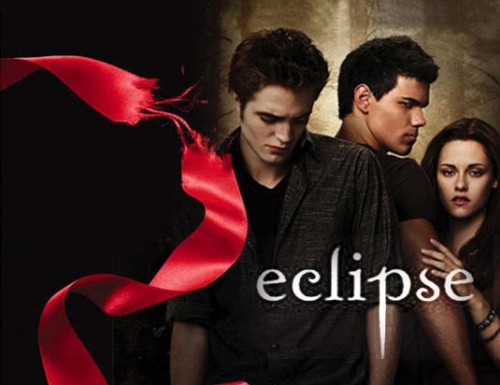 I went to go see Eclipse (2010, dir. David Slade) with the artist Karla Milosevich. We saw it at the Metreon. I got there a little early and stared at a poster for Cats and Dogs 2: The Revenge of Kitty Galore and its totally bizarre tagline: “they’re like real spies…only furrier.” Then I played a game where I tried to guess which of the people walking through the box office were also going to see Eclipse. Karla arrived. We watched the movie.

After we saw Eclipse we took a very crowded and somewhat sordid (of the “next time I see that bitch, I’m gonna kick her ass” variety) 14 Mission bus to Doc’s Clock, where we had a Jameson’s on special and talked critically and personally about our experience. Here’s a little bit of that tale.

While we waited for the bus we talked about our shared lack of experience with vampires and gothic materials.  We talked about the recent pervasiveness of vampires in pop culture and we wondered about why everything was about vampires so suddenly.  And there were a lot of questions. Vampires themselves: so questionable. Hmmm….

We talked about the phenomenon of “Team Edward” and “Team Jacob” and how neither of us were really strongly for one team or the other. Karla asked about “Team Bella,” but I didn’t think there is a “Team Bella.” We talked about the first time in the film you see Jacob’s shirtless rock hard abs leaning against his truck and how you could hear the audience squeal while Edward moped. And when some women behind us laughed and some younger women rows behind them yelled “It’s not funny!” Well that just made it even funnier of course!

Fortunately for us, we didn’t have to rely on my imperfect knowledge of the intricacies of the Twilight saga to get some answers. Because, earlier that night, on my way to the Metreon, I had run into my friend T. on Market Street.  She asked me where I was going and said she had read all the Twilight books. I bit my tongue then, but now that we knew we had a shared and friendly authority, we wanted answers.

On the bus after the movie, we texted T., “Can vampires fuck? Yes or no?” (We didn’t want her to give too much away about what comes next in the saga.) It turns out the answer isn’t so simple. She explained over a short series of text messages that Mormon vampires wait until marriage, but normal ones can and do. What?! Mormons?! Wait a minute, are vampires and werewolves not enough for one complicated plot line? So, let’s suffice it to say that vampires, like Mormons, can and do have sex on the compound. T. texted that vampire sex would be too potent for Bella, or something like that, and that he would be “overcome with Passion and eat her…not in the normal sex way.” We laughed about this on the 14 Mission.

Essentially, we decided that in Eclipse, Bella has a very difficult decision to make. Because we care about Bella and her human dilemma, we decided what she should do, which direction she should take. And so here begins our tale:

Bella should get Edward a Jameson’s  and “test drive the car.” See how smooth it rides and all of that.  You know! Before she gets married and becomes a vampire. But first she should have Jacob carry her to Las Vegas for two weeks so they can “test drive that car.” The one with the tan and warmth and no problem with waiting until they get to the compound or whatever to rev. And of course, Edward watches  Bella get it out of her system ’cause whenever she tries to do anything fun, there he is all of a sudden, all emo. Edward and Bella would then go backpacking in Europe for a change of scenery.

While they’re in Europe, Jacob falls in love with someone else since he knows Bella will not marry him. In Portugal, Bella decides to wait until she’s 40 to become a vampire and Edward seems OK with that as long as they get married. They all move to the California / Oregon border (Edward needs that foggy scene) and  Bella and Jacob remain friends. It’s always a little awkward between them, a little hot and tense, so they have to keep a comfortable distance, out of respect for their partners. 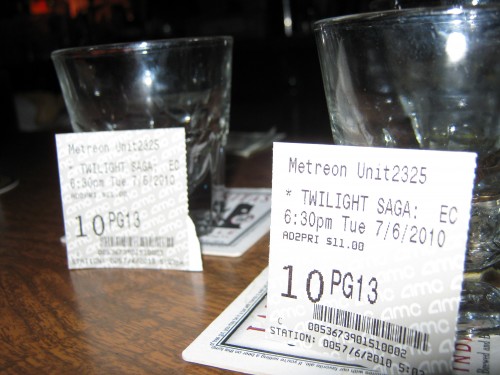 But Edward gets a little too passionate and ends up going on a hunger strike because he just can’t get the two of them together out of his mind. Not a conscious hunger strike, but the “sad diet.” After all, he had met a guru when he and Bella were backpacking in Prague. And it is kind of Adkin’s, so actually works ok for a vampire too, with minor adjustments. Years go by. At forty, Bella makes the change. She and Edward have settled into a nice life with the clan. Even her Dad comes to visit them sometimes.

Ten more years go by. Jacob’s tempted at this point to rekindle his romance with Bella because midlife is settling in, he’s a little bored. His kids look up to her and admire their “Aunt Bella,” which drives his human wife crazy, she’s no fan of Bella.  Who could blame her?  And also, now they are entering their  50’s. Bella is immer 40, the older woman now with Edward, who is forever 20-something.

When Jacob and Bella both find themselves at conventions in Las Vegas a few years later, you can probably imagine what happens. They have drinks and one thing leads to another in her hotel room. And Jacob’s still got it. And who shows up all stealth-like? Yep, Edward. Only now, he’s the hot one, ’cause he’s still young, and Jacob’s getting older. But they’re both hot in their ways.