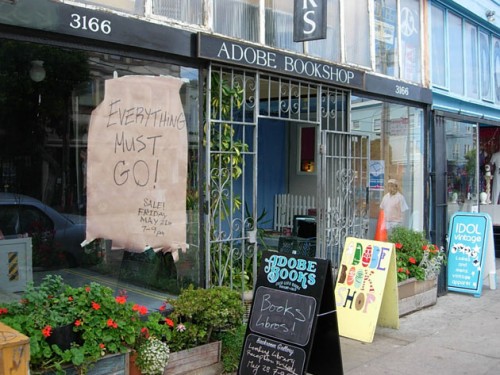 The first poetry reading I ever went to in San Francisco was at Adobe Books. I took the bus down from the closet I lived in in NOPA (those were in the old days when it was just called “kind of by the panhandle”) and ventured alone into a room of cheap wine-drinking scenesters chatting as the unmistakable aroma of feline urine wafted about.

The reading that night was two local poets I had never heard of: Brandon Downing and Kit Robinson. Both are important writers to me to this day. Brandon’s work has been expansive over the last decade: in addition to writing poetry he makes video art under the moniker “Dark Brandon” and in 2009 Fence published his tour de force mixed media book Lake Antiquity. Kit’s work is associated with the Bay Area L=A=N=G=U=A=G=E poets, an avant garde group in the late 1970’s and early 1980’s whose writing and influence would partly shape my own writing and attention in the 00’s. I don’t think I “got it”, exactly, in 1998. But I had a clear sense of the sociability: it was sort of a performance, sort of a party, and I (and anyone) could just show up.

It’s because of some of those formative experiences in art and writing that I’ve remained interested in theories and artworks that address social arrangement and relation, especially in the context of contemporaneity. In C’lick Me, an anthology of contemporary theory about the Internet and pornography, the Italian philosopher Francisco “Bifo” Berardi suggests two terms for thinking about how people relate to each other in culture: conjunction and connection. Bifo tracks what he reads as a paradigm shift from a culture of conjunction to one of connection. You can tell he thinks this is bad. Conjunction, in his essay, means “singular, unrepeatable communication between round bodies.” Connection the “compatibilization of de-singularized bodies.” Bifo prefers the experience of conjunction, unpredictable and potentially sloppy encounters, to the “algorithmic” form of contemporary life.

I moved to San Francisco in 1998. I was 19, and while I’m as sophisticated a cat as you’ll meet in your life now, it was a little bit like one of those dumb scenes where the fresh-faced farm kid moves to New York City and is robbed of all her belongings in like 30 seconds. I didn’t really get poetry post 1950, painting post like early Matisse at the best, or music before 1977. And while the punk scene in Kansas City had given me an education in DIY and community, I had no idea what that meant for an arts community.

So,  Adobe isn’t “just a bookstore.” It’s a site that cultivates urban conjunction and encounters. This produces a complex entrepreneurial model. They do sell used books and I’ve found gems there over the years.  But it’s also a space in which one is likely to have a conversation: with whoever’s working the desk, with neighborhood folk, with whoever just woke up on the couch, as buy a book. Now perhaps, from a business point of view, this model of conjunction is, to quote Jay-Z, a “gift and a curse.” But from the perspective of artists in the Mission, in San Francisco, on vacation, etc, what a place like Adobe produces and permits is not only terrific, it’s critical.

Something in between a party and a shop. So in that regard Adobe is an exceptionally appropriate space to house Lending Library, curated by Dena Beard. Lending Library bills itself as a broker for conjunctive encounter. The artists in the show create installations, or “strategies” meant to provoke new relationships to data, new relationships to meaning in the viewer.

The diversity of the individual stations illustrates the diversity of the artists Beard has assembled. Even the descriptive terms for what I’m calling “stations” are diverse: alternately “bookshelf,” “collections,” “derivations,” “studio,” “research,” “work,” “tools.” In each one finds images, shrapnel of commodity life, resituated texts. Some have musical objects, books, organic matter. There’s a table and a bench in the back room with a record player on it; there’s space to sit, to study, to remove oneself from the speedy world of connection culture and participate in the show.

I picked up a book from Colter Jacobsen’s collection that is well-known to me, “Denny Smith” by Robert Gluck, and a text previously unknown to me, Christine Wong Yap’s experimental treatise on optimism and pessimism. Sitting for just 20 minutes or so, I read a description of a young man masturbating high above his housing tract as a teenager, “marking the scene with pleasure” so it could be returned to later, made legible as a site. And then in the jouissantly clinical language of Yap’s text, “As pleasures are necessarily fleeting and self-limiting, modest pleasures will do just as well as grand ones.”

Other adjancies emerged in the room the longer I lingered. Kevin Killian’s obsessive ephemera of all things Kylie Minogue (an obsession that has resulted in some of the most amazing of contemporary poetry) next to Tom Marioni’s uber-masculine studio, populated with portraits of his influences, all dashing and male, far removed in surface from Killian’s pop princess.  Emily Prince’s “research” is presented as an assemblage of photographs and the ephemera of American life: an American life belonging to no one person, to a family which never was related until now. In this way, Prince’s research could be a description of the very conjunctive community that thrives at a place like Adobe. 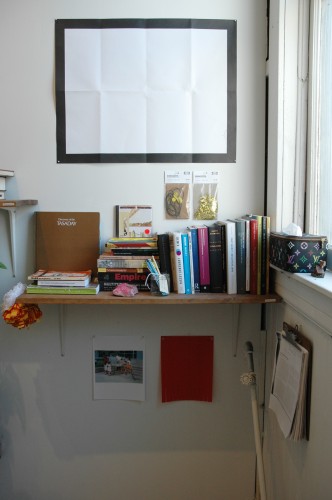 The question of community under siege by global capital is relevant to both Amy Franceschini’s bookshelf and Stephanie Syjuco’s work. Franceschini transforms the bookshelf, the very artifice that supports the bookstore, as a battlefield where utopian city planning battles its antagonist: wilderness. Two lemon trees from the artist’s studio provide stark contrast to the theoretical material above, material which for all the wildness of its thought remains strictly laid out in line and verse. Syjuco’s work illustrates the problem of making art under the literally painful vicissitudes of capitalism: its objects live in the fraught threshold of commodity and aesthetic object. This involves an attention to the disastrous condition of big box production, the supposed antithesis to the individual work of genius, and the paradoxical situation of their actual overlap. The form this takes is decoy commodities, booby traps, bootlegs.  Alongside its playfulness, though, I read in it the stark admission that such systemic, ideological forces will always control some part of one’s imagination. You know how Jameson says somewhere that “it’s easier to imagine the end of the world than it is to imagine the end of capitalism?” Syjuco’s project shows the scars from that necessary reliance of every artwork on the imposed conditions that keep the artist alive.

Speaking of staying alive, before going down to see Lending Library, I had read about the installation in the front window of the store. A ripped brown paper reads in large letters in the front display read Everything Must Go! Walking in, I heard the proprietor of Adobe, Andrew McKinley, explaining to a concerned patron that Adobe was not imminently going out of business, that the sign was part of an installation by Nicolas Torres, but that in fact the shop was in serious financial peril and might not make it through the year. As he was finishing the narrative, another longtime customer came up and asked the same question, meaning Andrew had to take it from the top. I wondered if Torres’ piece, profoundly pro-Adobe as it is, might also be Andrew McKinley’s least favorite artwork, like, ever.

The piece is called “Neighborhood Watch,” is an illustration of the fact that the pervasive gentrification that effected massive demographic change in the Mission in the late 90’s remains both active and provocative for artists who live in the neighborhood. Given the massive turnover experienced by establishments of all kind on and nearby Valencia Street, as well as the nearly global decline of the bookstore, it’s kind of astonishing that Adobe has made it this long without radically changing its structure.

And in that way, it’s part of the neverending story of gentrification itself. The old proverb about how artists moving to a relatively unexploited neighborhood paves the way for the gentry speaks to the paradoxically simultaneous devastation and potentiality of that process.  Still, as spaces like Adobe continue to disappear from the urban landscape, I want to try and be optimistic that there’s a real commitment to establishing architectures of renewable possibility. Spaces where one doesn’t just connect, one conjuncts.