Get Him To The Greek

Sometimes during my tenure as blogger, I will go see Hollywood blockbusters with artists and document, in impressionistic fashion, our experience. This is episode one. 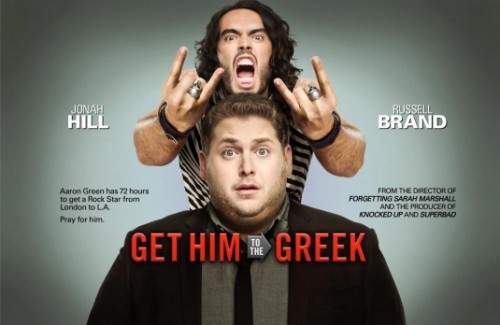 I went to go see Get Him To The Greek (2010, dir. Nicholas Stoller) with the poet Evan Kennedy. We saw it at the mall. I got there a little early and after buying our tickets I played a high pace 3-D speedboat racing game. Evan got distracted by menswear but was still on time by California standards. We watched the movie.

After we saw Get Him To The Greek we walked up to my favorite bar in the Tenderloin, where we had a beer and talked critically and personally about our experience. Here’s a little bit of what this involved.

We talked about the critical moment in the film being the one in which Aaron Green(played by Jonah Hill) finally gets Aldous to the Greek and all of the implications of this watershed moment in American cinema. About how Aaron finally denies the subsumption to pop culture which has guided all of his actions heretofore. We talked about how Aaron abandons pop at this moment and finally embraces the real. We talked about how “the real” in the film appears as pure compromise and deference to the goals of capital.

We talked about what negative parts of our personalities would fully emerge if we got hugely famous. We speculated that it would probably involve substance abuse. We speculated about whether it would involve various modes of sexual libertinism and we agreed that the answer was possibly, but that it was complicated, and that we each had slightly different desires vis a vis potentially activating that libertinism in this fantasy but we both agreed that the power groupie thing was yucky and undesirable period.

We talked about times in our own lives when we had done something similar to what Aaron does in Get Him To The Greek. We talked about older, famous artists and poets we had had had to steward in some way and the pompous and ridiculous things they had said and done. 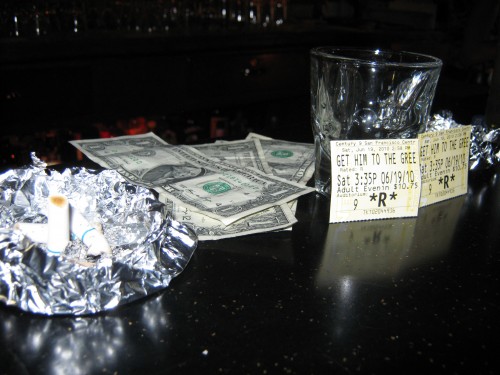 I have a drink with the poet Evan Kennedy after seeing Get Him To The Greek. Smoking is bad for you.

We talked about how in Get Him To The Greek a lot of things go up the ass and come out of the mouth so it’s like the inverse of nutrition.

We talked about the trope of the “furry walls” in the film. And how there was all this recurrent imagery of sleep and sleeplessness and how pop never sleeps but also how pop is narcotic and puts everyone to sleep. And how pop is like the furry walls.