Five questions to SFMOMA artists, staff, or guests.  James Williams is senior graphic designer at SFMOMA, currently acting head of graphic design. He has has won many awards for his work at SFMOMA and elsewhere, including First Prize in the 2009 AAM Museum Publications Design Competition for Brought to Light: Photography and the Invisible, 1840–1900. He’s also the person behind SFMOMA’s 75th Anniversary starburst, you have surely seen around town. 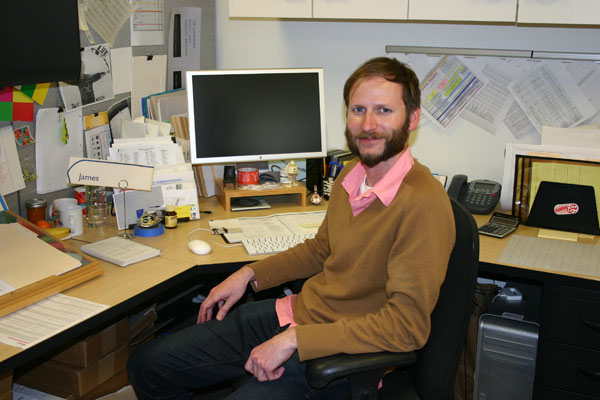 James Williams at his desk in the SFMOMA offices.

I am reminded of someone else asking me that same question a few years ago. I told that person that I did not collect anything, and then I went home and realized I collect all sorts of stuff. I guess I don’t collect anything of specific value. I just collect pieces of paper that I find or collect kitchen equipment. When I was a kid I collected fortunes out of fortune cookies and that’s something that I’ve started doing again. I can’t throw them away anymore. I did for about 20 years but now I’ve started making a pile of them. When I was a kid I thought I would use them in another way, but never did. They just took up space. Now I think I’ll be able to use them in another way, although it’s doubtful I’ll get around to that. But it would be fun to implement them somehow into a project.

I also collect pieces of paper that I find on the street. I’m often struck by trash that you see everywhere but sometimes you see patterns in that trash. I always see a certain part of cigarette boxes. It seems that whenever people open a cigarette box this one part of the box somehow ends up in the street. It’s a little tab that has 4 dots on it that are the colors used in the printing of the box. So, that always strikes me. As a graphic designer I recognize that as part of the process of printing. I’m always picking those up and sticking them in my pocket and sometimes I just find them in my pocket later. I haven’t designated a certain spot to put those in so it’s a collection that’s floating throughout my pockets and jackets and apartment right now.

I was thinking of Rirkrit Tiravanija, an artist who has done work at SFMOMA before.  Sometimes what he does in his projects is cook a large meal and serve it, and the resulting piece is the dirty dishes left from that meal. That would be great because it would be a dinner party but he would cook for me, so that could be fun. And I heard it was good food.

I heard a story the other day about him, that he visited a fortune teller with this friend of mine who is friends with him. The fortune teller told him that he was a coffin salesman. His friends who were with him gave him no end of grief, just could not believe how hilarious that was, that the fortune teller thought Rirkrit was a coffin salesman, because basically he sells things that people don’t want, in a way, like dirty dishes. He somehow gets away with that. I thought that was pretty funny.

That question is not as open as you might think.  I would have to live with this thing, so it rules out a bunch of things. I was thinking about the museum’s collection and I thought about the Vija Celmins piece, Untitled (Galaxy). It’s a black and white image of a starry spacescape. That’s something I think I could look at every day, because whenever it goes up in the galleries it always strikes me and I can spend time with it no matter how many times I’ve seen it before. There are other pieces that I love, it seems, as much, but that I couldn’t look at every day or live with. That’s one piece I could stare at for a while and it’s also the same age as me, so I like that. If I could live with this thing we could age together, so that could be fun.

Most of the time I don’t listen to anything other than what is going on around me, which is often times a lot. Our department is set up in such a way that we don’t have individual work spaces, so I work next to two other graphic designers and just over a wall I have two editors and over another wall a third editor and then beyond a door a fourth editor. Most of the time there’s a lot of conversation going on with the editorial team which has a lot to do with what the designers are working on. At times when I’ve got bigger projects I’m working on I need to zone out of that. If I’m working on a book I need to listen to music. On rare occasions I’ll put on the headphones and get going with it. I’ll turn on Pandora and pick a station. What usually happens is, with large projects, whatever genre or artist I start out with I’ll tend to stick with so it’s a consistent vibe throughout.

The most recent station I turned on the other night, for a reason other than work, was a Hall & Oates station. When I was working on the Brought to Light catalogue for the photography department here I was listening to an iTunes radio station that was playing European pop music and I kind of fell into it and stuck with it. So that became the soundtrack for me designing that book. The way that the design process goes is, you work on a catalogue, you send it off to be printed, and in this case it was being printed in Europe. I got a chance to go to Europe to print the catalogue and while I was there I ended up hearing all these songs at a dance club and elsewhere that I had been listening to while I had been making the book. It seemed like the perfect way to wrap things up, it seemed that everything came together at that point, all the pain and work was worth it.

But, the first thing that came to mind was a corkscrew. When it’s built right it serves a singular purpose and so efficiently. It can be a beautiful object to look at and also to use when it’s formed correctly. The sound that a cork makes when it come out of a bottle can be a joyous thing too.

James is soon to be on his way to the greener and brighter pastures of NYC. We’ll miss you, James.