Final thoughts on the invisible

Throughout human history cultures and peoples have been evicted, slaughtered, assimilated, swallowed up. Some live in legend; most are forgotten. They slide over each other like continental shelves colliding, with one slipping under the other, invisible but still there, forever hidden, waiting under the surface. Patrick Fermor is a nonagenarian English travel writer who has written extensively about the history of Greece and surrounding areas. He is famous for his memoir about walking from London to Constantinople in the late 1930s, recording a world that would soon disappear forever in the wake of WWII. In Mani, written in the 50s, he lists peoples who had or would disappear from history… 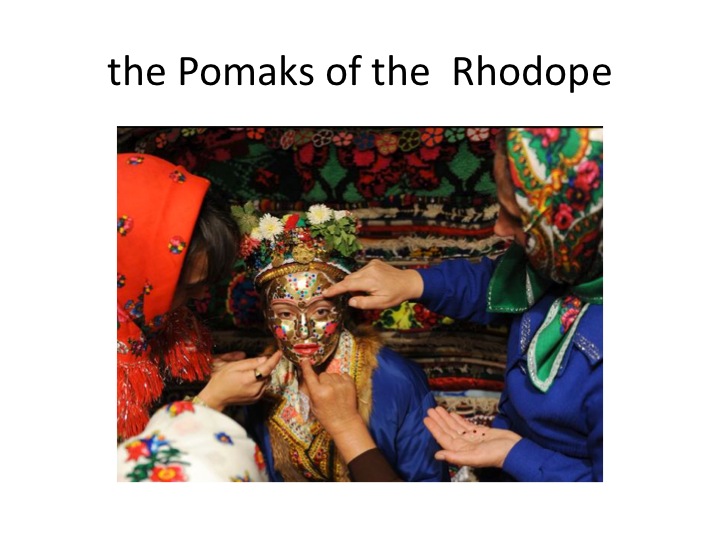 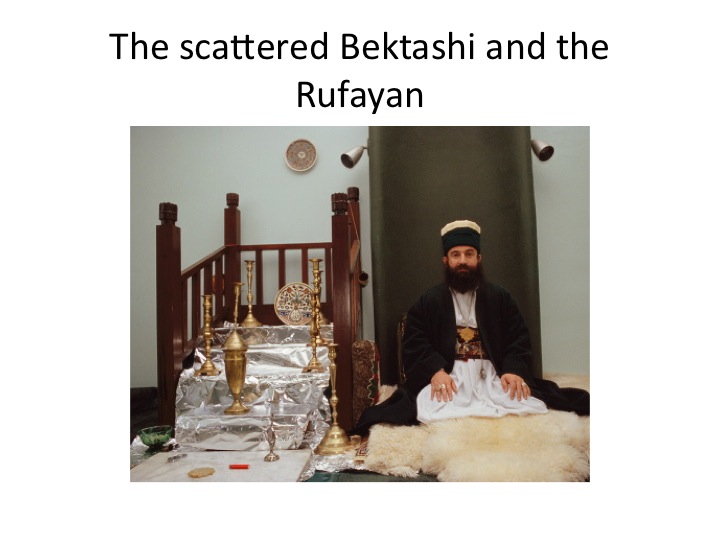 “The scattered Bektashi and Rufayan, Mevlevi dervishes of the Tower of the Winds, the Liaps of Souli, The Pomaks of the Rhodope, the Kizilbashi near Kechro, Fire-Walkers of Mavrolevki, Lazi from the Pontic, Linovamvaki Crypto-Christain Moslems of Cyprus, Donmehs, crypto-Jewish Moslmes of Salonika and Smyrna, the Chams of Thesprotia, the Karamanlides of Cappadocia, the Mangas of Pareus, Thessalonican Sephardim, Sponge-fishers of Calymnos, Basilian Monks, Idiorrhythmic and Cenobitic, Pontics of the Sea of Azov,  the Loubinistika-speakers of the brothels, the Anglo-Saxons of the Varangian Guard, ye olde Englisshe of the Levant company, the Klephts and the Armatoles, the Kroumides of Colchis, the Koniarides of Loxada, the smugglers of Ai-Vali, the lunatics of Cephalonia, the admirals of Hydra, the Phanariots of the sublime Porte, the princes and boyars of Moldowallachia, the Ralli Brothers of India, the Whittls of Constantinople, the lepers of Spinalonga, the political prisoners of the Macronisos, the Hello-boys back from the States, the two pig-roasting Japanese ex-convicts of Crete, the solitary negro of Canea and a wandering Arab I saw years ago in Domoko, the Chinese tea-pedlar of Kolonaki, killed in Paraeus during the war by a bomb—

Like ethnic groups merging into one another over centuries, Lee Walton’s performance Life/Theater Project on March 3, 2007 made shoppers, audience members, performers and pedestrians invisible to each other and from each other. He invited the public to attend a performance for one hour on a weekend afternoon on busy Mission Street between Cesar Chavez Avenue and 20th Street in San Francisco. Here is a slide taken on the street with actors, audience, pedestrians intermingled and invisible to each other: 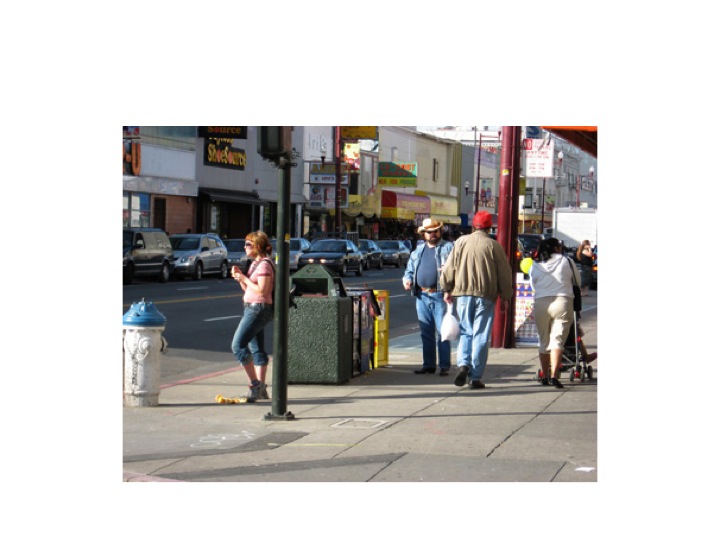 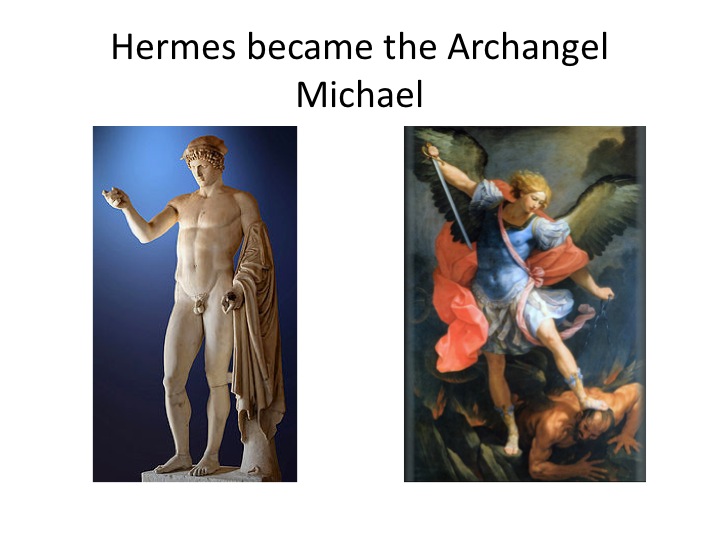 Joseph Selle was a commercial street photographer who worked Union Square in San Francisco from the 1930s until he retired in the 1970s. He would take candid pictures of tourists and then offer to mail the snapshots to them for a small fee. When he retired he had an archive of 1.5 million negatives that accidentally documented American mid-century life. Captured on film in the middle of their everyday travels, these people—the adults now all certainly long dead, the children, if surviving, very elderly—live on as ghosts in these photographs, full of life, haunting every city street, walking beside us as we pass unaware of the generations before or to come who have walked these same streets. They reside in a complete forgotten anonymity, until we interrupt their suspended animation for a brief moment, then leave, allowing them to return to the land of the invisible… 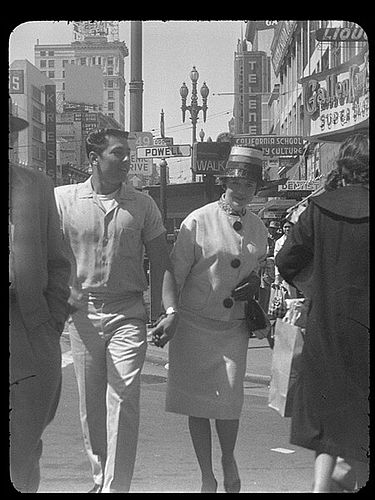 There is a church in Jerusalem that is built over the site that traditionally is believed to be the cave in which Jesus was buried. It is called the Church of the Holy Sepulcher. Many Christian denominations consider it one of the holiest places on earth. Unfortunately they fought constantly for control of the site for a thousand years. Finally in the 19th century the Ottomans, who controlled Jerusalem, were fed up with the squabbling and made a ruling that divided control of the church by denomination, by day and hour and by section of the church. This system was accepted and has been in place for over 100 years. Specifically this means that Church X has the right to the northern wall on Tuesdays, Church Y has it on Fridays. Church X may clean the floors on Saturday, but Church Z has complete control on Friday and Monday. Light bulb replacement in certain fixtures is also divvied up like that.
The most famous and odd manifestation of this arcane system is that in the 19th century someone took a ladder up to a window on the front exterior of the church to do some work, but was stopped in his tracks by an official from another denomination who challenged his right to do so. The jurisdictional matter has never been settled and the ladder has stood in the exact same place through the entire 20th century, and is still there today.
What looks like a simple old cathedral is actually a nexus of lines of authority, control, power, faith, and compromise that is invisible but real. 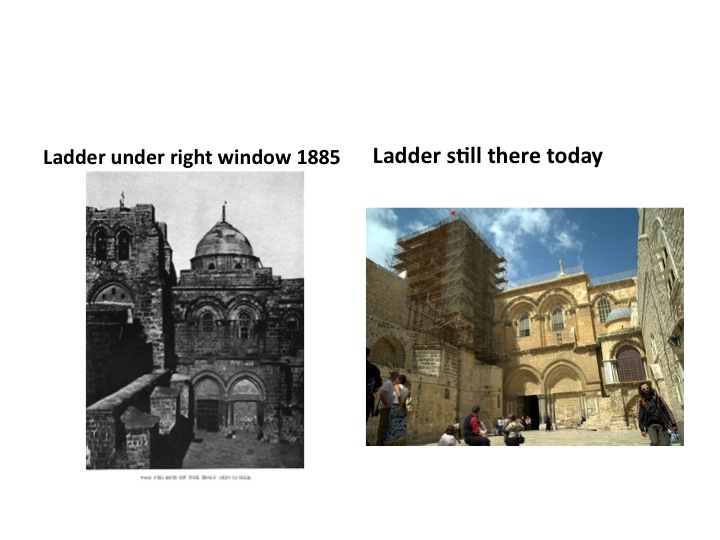 Robert Smithson talked about the ignored space around art as defining a non-space that creates the meaning for the art object.

What we imagine is invisible. What we intuit is what is there but not yet visible.

Surveillance is the police activity most parallel to what artists do: long tedious hours looking for invisible order in the  chaos of the universe.

In the NY Times book review of 9/8/09, David Kirby wrote of the poet Amy Gerstler that her “Interview With a Dog” contains much doggy wisdom; dogs have an especially keen interest in excrement, for example, because it’s news from the invisible interior, “Volumes of/urgent correspondence your organs wrote, if only you /knew how to read.”

The Bay Area artist Trevor Paglen has researched the secret activities and invisible black budget of US spy agencies filtered through the mind of an artist and the multiple meanings of invisiblity:

“Many of the US’s classified sites have huge bugger zones around them. They are surrounded by dozens and dozens of miles of restricted area, and there is often nowhere on public land from which to observe them with the unaided eye. So I’ve been trying to use telescopes with anywhere between about 1200 and 7000 mm lenses to help me see. It’s like taking an Ansel Adams photo and blowing it up hundreds or even thousands of times and learning that in fact the desert is not nearly what it appears to be. You’re looking through so much heat and so much haze in my images that they themselves start to collapse. All of the colors fall apart creating impressionistic blurs out of surveillance towers or aircraft, flight test centers etc. The way that I think about the project is not only as documenting these places but also as photographing what it looks like when you’re pushing your eyes as far as they will go. At around 44-45 miles the images really start to collapse completely. I’ve photographed a naval site off the coast of Malibu at a distance of 65 miles and the only evidence that you see of it in the image is a slight indentation in the horizon….In terms of developing a visual language with which to try to see this invisible world, this process takes you in a direction of complete abstraction, where your eyes are pushed to the point of collapse and vision falls apart.”–Trevor Paglen, Curating Now 2008, CCA