In a Fairfield Porter frame of mind I hopped a bus over to the edge of the Tenderloin, where an energetic new gallery, Ever Gold, has taken root at 441 O’Farrell Street.  Two young white male artists have worked up a show called American Cinema. 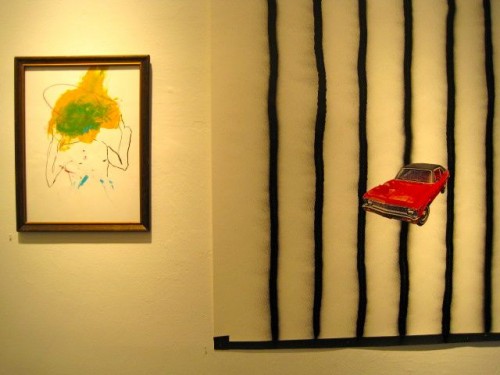 The invite was cute, with Bob Dylan as “Alias” in that Peckinpah film facing down Al Pacino as Serpico. Dylan stands to the left representing the West, old and new, and Pacino on the right, as though to hold down the NYC territory. Ryan Coffey lives and works in San Francisco, while Jason Grabowski hails from Brooklyn. He tells me he brought all his work in a package on the plane, even his collection of what other galleries might call “artist’s frames.” 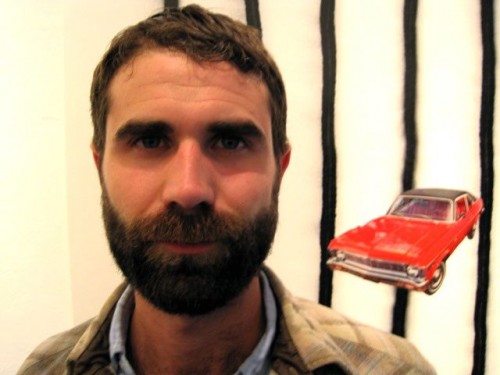 I met these young artists here in San Francisco, as they are friends of the poet Jason Morris and have contributed to his handmade art/music/poetry venture Big Bell. Jason is always extolling these guys—Ryan is a housemate of his, in an industrial part of the Mission—and usually Jason’s got good taste, though you know what they say about artists recommended by poets. But what of the art? There’s enough of it up on the walls for me to say that they know how to put on a good show. 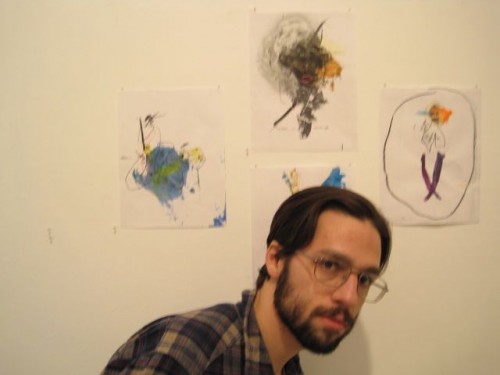 Artist Jason Grabowski, crouching as though under the anguish of his intricately superimposed horrors.

Grabowski’s pictures are smaller but pack a punch. On the surface they revel in their own messy, hedonistic atmosphere, like a sunny day at Altamont. His faces and figures are sharply realized, and terrible things are happening to them, but the details are blurred by an apparently unmotivated attack by a color wheel flinging out bands, stripes, and dashes of paint. I thought of the famous libel case in Victorian England in which Whistler sued John Ruskin for saying that, in the now classic Nocturnes, he had insulted the audience with color. “I have seen, and heard, much of cockney impudence before now; but never expected a coxcomb to ask two hundred guineas for flinging a pot of paint in the public’s face.” Not that Grabowski is impudent, but the tension in the work stems from a systemic inversion of the functions of image and gesture. 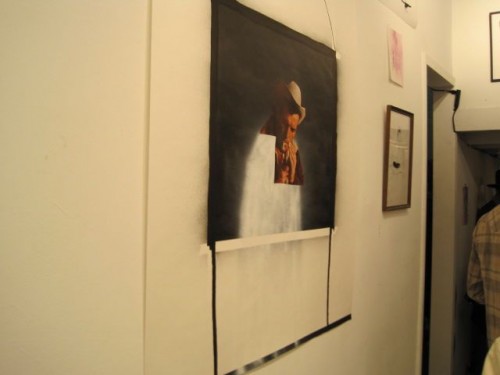 The artists came up with the idea of re-staging certain episodes of the “New American Cinema” of the 1960s and 1970s. It was a time in which traditional studio productions were flopping, while European masters like Godard, Antonioni, Varda and Truffaut were nudging a new generation of US directors towards a more personal and political cinema. It was an era of great excitement in the movies, and Coffey’s pictures in particular reflect on that excitement with the aid of heaps of old Life magazines and that glossy color photography that Life did best. Coffey’s work collages and interrogates elements of the magazine, editing and framing, while a liberal use of paint as marker provides the mise-en-scene. If Richard Prince hadn’t done all those Marlboro cowboys, one element of Coffey’s production would seem fresher, but there is still plenty to admire and, in fact, crave. Give me that picture with Robert Redford and Mia Farrow. I’m no expert, but it looks like Redford in one of his Paul Newman Westerns, while Mia Farrow and her painfully chopped hair evoke the days of Satan and Manson and Rosemary’s Baby. The two famous heads dominate a landscape of red autumn leaves—and maybe we’re supposed also to remember the glamorous high summer experiment of their Great Gatsby remake (1974), directed by Jack Clayton. 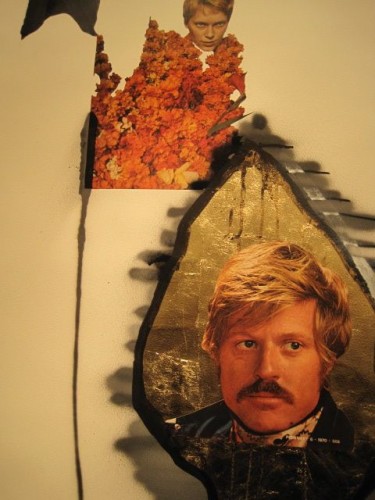 The mystery of stardom and nature: Ryan Coffey