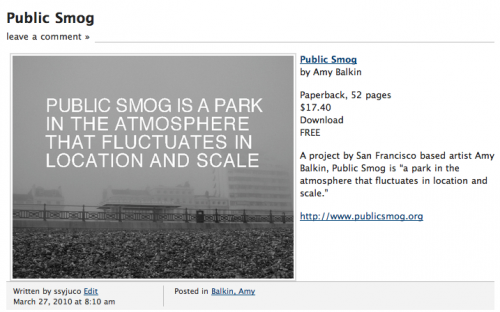 In a fit of nervous energy, last night I started a new website called Particulated Matter. A brief description:

Particulated Matter lists only artist-produced books, printed materials, and dispersed ephemera created with online print-on-demand services. These include lulu.com, blurb.com, and others. As a clearinghouse for these autonomously-published works, Particulated Matter attempts to form a network and hopefully aids in the distribution and acknowledgement of these creations.

Despite what sounds like a general waning of print media (the refrain is: “isn’t everything going digital?”) there’s a resurgence in a form of artist book publishing that is being assisted by the ease of digital media. Print-on-demand services are fast, cheap, and sometimes, depending on the content published, out of control. I have many artist friends who are creating their own catalogs and books, some as an archive of projects, and others as conceptual works in themselves. Just design and upload your file, and–voila! Accessible to everyone at reasonable rates! No overhead and no excess books lying around taking up space. Order and print as you need them.

This is a great thing. I’ve been able to publish several books this way, and have begun to start thinking of printed works as a part of my practice. The only problem with the decentralized and (generally) online presence of these works is that they seem to float free in the internet ether, uncollected. In a just world an online database with the same ethos as the brick-and-mortar New York organization Printed Matter would exist for these floaters. Particulated Matter is my personal way of starting a collection of independently-produced artists books that exist in this state. They’re like little particles knocking about and orbiting around an artist’s studio practice. All links on Particulated Matter take you to the artist webpages and more info on how to acquire the book (some are even free downloads!). Here’s to giving them more attention and acknowledging their production.

Note: Particulated Matter is a beta-test site for now. I would love to have it set up with tiny icons like amazon.com and a more extensive background of artist info. Also, it’s not exactly a database — it takes advantage of free blogging software and layouts. Basic, but a start.