None of the Above

Dodie and I drove all the way from South of Market to the far side of Potrero Hill and arrived at what seemed like a more peaceful world late Saturday afternoon—the Ping Pong Gallery on 22nd Street. We parked adjacent to a long row of rosebushes, across the street from the gallery. Do you remember Saturday? The sun was out depending on where you stood, and dark clouds filled the other part of the sky. Sometimes it would be raining while the sun still shone. Neil said that in Louisiana, when it’s raining in the sun, locals say that the devil’s beating his wife. “But I don’t know what that means either.” But in late afternoon on 22nd Street the day was weirdly quiet and still. Way up the hill above the gallery sit the slate-colored Potrero projects, almost as if on a cliff without access to the street below. The air was suffused with the deep red and the confident green of the rose trees.

We’d had a hectic day so only managed to push open the door somewhere around 4:45. Inside the Ping Pong we were welcomed by the director Joey Piziali, and the artist Deric Carner whose show we’d come to see. Carner is one of those artists Renny Pritikin talks about who has left San Francisco for the brighter lights of New York, but we knew him back when. He is the boyfriend of a fellow with whom I’ve been collaborating, the writer Bradford Nordeen. The show at Ping Pong is called, “None of the Above.” 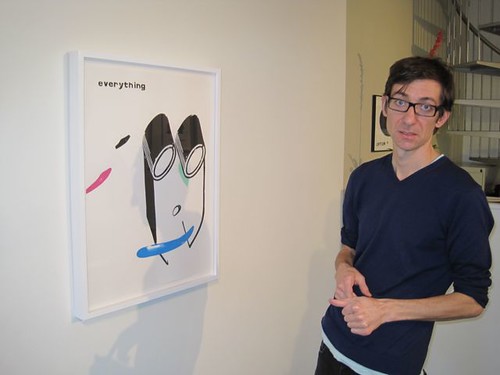 Artist Deric Carner and one of the pictures in his current exhibition, “None of the Above,” at San Francisco’s Ping Pong Gallery. Note: he’s not leaning against anything, but actually standing that way.

I’m glad he flew in, because the work, while evocative and crisp, poses a lot of questions. The eternal dilemma: should an artwork capture you at first glance, or does reading the signage increase one’s appreciation and understanding of the thing one’s seeing? You can see by the photos that each individual piece in “None of the Above” gleams clean, bright and sunny as a travel poster, with something of the late Matisse “Jazz” minimalism to it, that Mediterranean invitingness. Invitationalism?  “Allure,” I guess.  Was it all made on the Riviera, like Grace Kelly in To Catch a Thief? Intricately woven into the images, strange words and fragments can be read, but Carner explained that we were not think of the pictures as illustrations to the words, nor vice versa. The words aren’t captions either. “None of the above?” I asked. In fact, the work asks us to greet this new relation between text and image with a fresh perspective, almost a generosity of spirit, while keeping its cool and going easy on emotion, or sentiment. 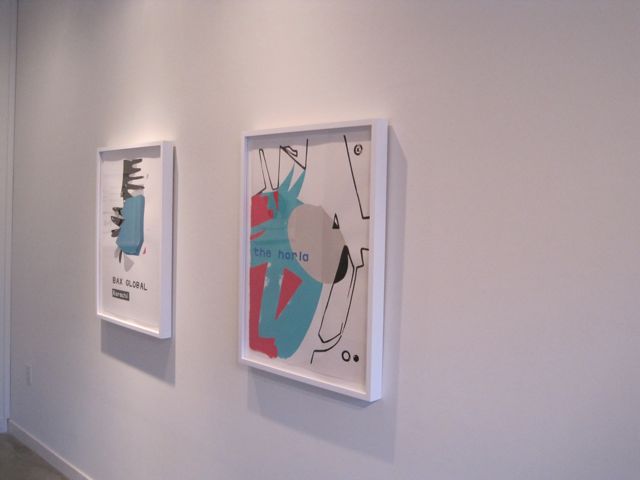 That isn’t always easy, but at their best, I think, Deric Carner’s work does provide something genuinely original. One of the stronger pieces looks like an old fashioned doorknob floating on a sliver of teal, as the words “Build Your Own EXIT” float underneath it in a sharp-cut black. “You must be some kind of New Age guru,” I told Deric, who shook his head to laugh off the estimate. “Well, maybe, but a Deleuzian sort of guru,” he replied. That shut all of us up for a few seconds. Joey gave us each a copy of the catalog for the show with an essay by Chris Fitzpatrick on the work, which I took home, marveling at the ease with which Chris lets us know he doesn’t understand it all either. Carner’s mom and dad (and granddad) were all Berlitz translators, and he grew up in Paris and in Washington DC. There was something ironic about such a heritage, he mused, seeing that his current project is to destroy language. 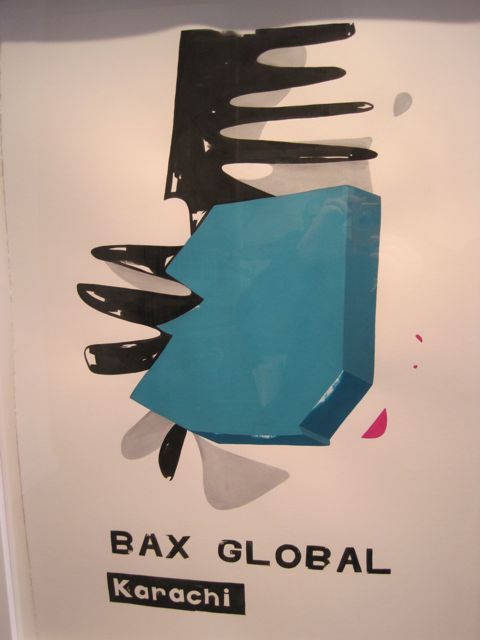 We argued about whether language could be destroyed, but in that airy square room, on the far side of the hill, it certainly feels dislodged—like a tooth you’re wiggling with your tongue. Dodie and I sidled over to the price list that sat on the counter. My God are things reasonable there!