Conversation with Paolo Salvagione, lead engineer on the 10,000-year clock project, via e-mail in February 2010.

For an introduction to what we’re talking about here’s a short excerpt from a piece by Michael Chabon, published in 2006 in Details: ….Have you heard of this thing? It is going to be a kind of gigantic mechanical computer, slow, simple and ingenious, marking the hour, the day, the year, the century, the millennium, and the precession of the equinoxes, with a huge orrery to keep track of the immense ticking of the six naked-eye planets on their great orbital mainspring. The Clock of the Long Now will stand sixty feet tall, cost tens of millions of dollars, and when completed its designers and supporters plan to hide it in a cave in the Great Basin National Park in Nevada, a day’s hard walking from anywhere. Oh, and it’s going to run for ten thousand years. But even if the Clock of the Long Now fails to last ten thousand years, even if it breaks down after half or a quarter or a tenth that span, this mad contraption will already have long since fulfilled its purpose. Indeed the Clock may have accomplished its greatest task before it is ever finished, perhaps without ever being built at all. The point of the Clock of the Long Now is not to measure out the passage, into their unknown future, of the race of creatures that built it. The point of the Clock is to revive and restore the whole idea of the Future, to get us thinking about the Future again, to the degree if not in quite the way same way that we used to do, and to reintroduce the notion that we don’t just bequeath the future—though we do, whether we think about it or not. We also, in the very broadest sense of the first person plural pronoun, inherit it.

Renny Pritikin: When we were talking the other day I said that this sounds like a cross between Borges and the vast underground special effects from Forbidden Planet. I imagine you hear lots of comparisons like that…

Paolo Salvagione: (laughs) I can’t say I’ve heard that comparison. A childhood friend once referred to the project as a cross between Tinguely and Fabergé. When talking about the clock, with people, there’s that divide-by-zero moment (in the early days of computers to divide by zero was a sure way to crash the computer) and I can understand why. Where does one place, in one’s memory, such a thing, such a concept? After the pause, one could liken it to a reboot, the questions just start streaming out.

RP: OK so I think the word for that is nonplussed. Which the thesaurus matches with flummoxed, bewildered, at a loss. So the question is why even (I assume) fairly sophisticated people like your friends react like that. Is it the physical scale of the plan, or the notion of thinking 10,000 years into the future—more than the length of human history?

PS: I’d say it’s all three and more. I continue to be amazed by the specificity of the questions asked. Anthropologists ask a completely different set of questions than say, a mechanical engineer or a hedge fund manager. Our disciplines tie us to our perspectives. More than once, a seemingly innocent question has made an impact on the design of the clock. It’s not that we didn’t know the answer, sometimes we did, it’s that we hadn’t thought about it from the perspective of the person asking the question. Back to your question. I think when sophisticated people, like you, thread this concept through their own personal narrative it tickles them. Keeping in mind some people hate to be tickled.

RP: Can you give an example of a question that redirected the plan? That’s really so interesting, that all you brainiacs slaving away on this project and some amateur blithely pinpoints a problem or inconsistency or insight that spins it off in a different direction. It’s like the butterfly effect. 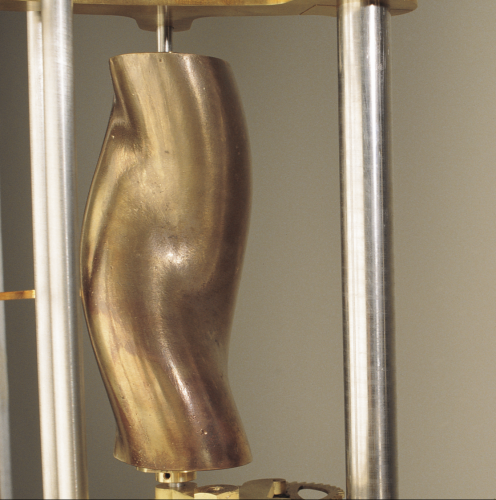 PS: Recently a climatologist pointed out that our equation of time cam, (photo by Rolfe Horn) (a cam is a type of gear: link) a device that tracks the difference between solar noon and mundane noon as well as the precession of the equinoxes, did not account for the redistribution of water away from the earth’s poles. The equation-of-time cam is arguably one of the most aesthetically pleasing parts of the clock. It also happens to be one that is fairly easy to explain. It visually demonstrates two extremes. If you slice it, like a loaf of bread, into 10,000 slices each slice would represent a year. The outside edge of the slice, let’s call it the crust, represents any point in that year, 365 points, 365 days. You could, given the right amount of magnification, divide it into hours, minutes, even seconds. Stepping back and looking at the unsliced cam the bottom is the year 2000 and the top is the year 12000. The twist that you see is the precession of the equinoxes. Now here’s the fun part, there’s a slight taper to the twist, that’s the slowing of the earth on its axis. As the ice at the poles melts we have a redistribution of water, we’re all becoming part of the “slow earth” movement.

RP: Are you familiar with Charles Ray’s early work in which you saw a plate on a table, or an object on the wall, and they looked stable, but were actually spinning incredibly slowly, or incredibly fast, and you couldn’t tell in either case? Or, more to the point, Tim Hawkinson’s early works in which he had rows of clockwork gears that turned very very fast, and then down the line, slower and slower, until at the end it approached the slowness that you’re dealing with?

PS: The spinning pieces by Ray touches on something we’re trying to avoid. We want you to know just how fast or just how slow the various parts are moving. The beauty of the Ray piece is that you can’t tell, fast, slow, stationary, they all look the same. I’m not familiar with the Hawkinson clockwork piece. I’ve see the clock pieces where he hides the mechanism and uses unlikely objects as the hands, such as the brass clasp on the back of a manila envelope or the tab of a coke can.

RP: Spin Sink (1 Rev./100 Years) (1995), in contrast, is a 24-foot-long row of interlocking gears, the smallest of which is driven by a whirring toy motor that in turn drives each consecutively larger and more slowly turning gear up to the largest of all, which rotates approximately once every one hundred years. 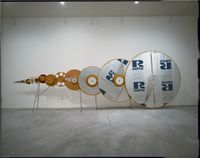 PS: I don’t know how I missed it, it’s gorgeous. Linking the speed that we can barely see with one that we rarely have the patience to wait for.

RP: : So you say you’ve opted for the clock’s time scale to be transparent. How will the clock communicate how fast it’s going?

PS: By placing the clock in a mountain we have a reference to long time. The stratigraphy provides us with the slowest metric. The clock is a middle point between millennia and seconds. Looking back 10,000 years we find the beginnings of civilization. Looking at an earthenware vessel from that era we imagine its use, the contents, the craftsman. The images painted or inscribed on the outside provide some insight into the lives and the languages of the distant past. Often these interpretations are flawed, biased or over-reaching. What I’m most enchanted by is that we continue to construct possible pasts around these objects, that our curiosity is overwhelming. We line up to see the treasures of Tut, or the remains of frozen ancestors. With the clock we are asking you to create possible futures, long futures, and with them the narratives that made them happen.