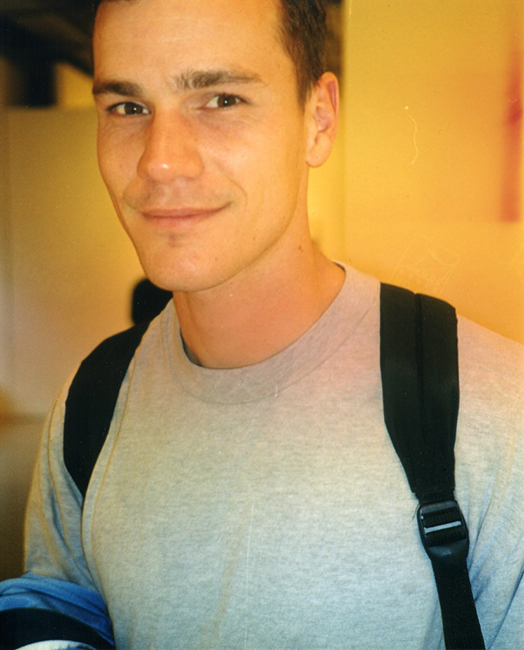 Try as we might to get away from the museum, it always lures us in with something bright. This summer in San Francisco, we had the Richard Avedon exhibition and the show which matched Georgia O Keeffe and Ansel Adams (as some wags call it, Ma and Pa Kettle on the Farm.) Then there’s “Not New Work,” curated by SFMOMA’s Apsara Di Quinzio and selected by Vincent Fecteau from the museum’s own hoard of antiquity. 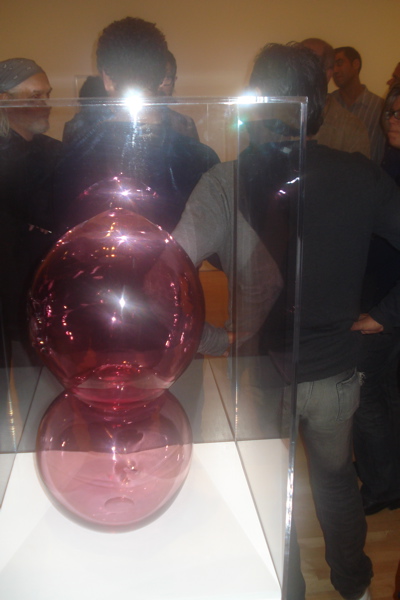 Fecteau’s taste is a complex web, and I knew going in that I was going to see something that I might not necessarily like, but it would be a show worthy of high respect. Ever since Warhol went into RISD and rearranged its collection in the spring of 1970, I’ve enjoyed thinking about ways to “raid the icebox.” Haven’t seen as many of these exhibitions as I’d like, but I always turn down the corner of the page in my mind. 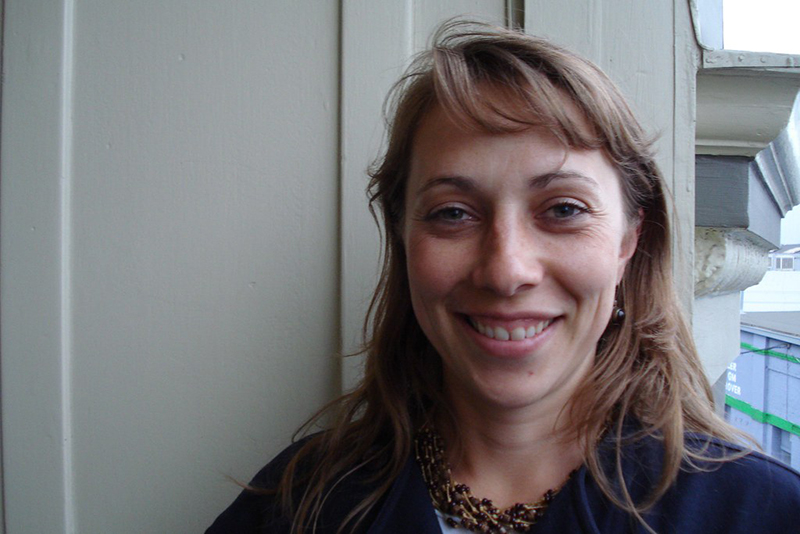 Apsara Di Quinzio of SFMOMA. I wouldn’t even let her take her coat off, just whisked her out onto the landing to take this photo!

I envied Fecteau the opportunity to go into the bowels of the institution and bring up what he could find. As the late critic Eve Kosofsky Sedgwick once noted, the recurring image in Henry James’ prefaces to the “New York Edition” of his novels is that of the “acquiring hand lodged in the concealing rectum, like a mole digging for treasure. Due to its associations with “backstage,” the glamour of the quest is one of theatricality and display–but also display’s reverse, the (now formerly) hidden status of the objects in view.”  I’ve been thinking of this image every time I see a bulldozer abandoned on a job site, at the bottom of a 30-foot-hole, now frozen in mid-job as a result of the economic slowdown and resultant construction freeze.  Who knew what Fecteau would be able to find in a museum once scorned for the paucity of its collections? 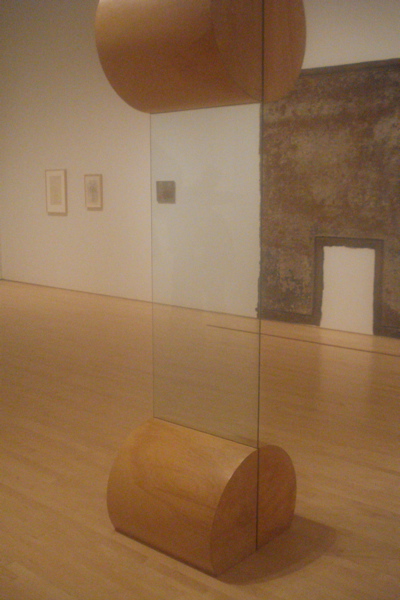 Arriving at the opening we could spot the tall, inquisitive Fecteau right away, his head cocked to one side to catch the comments of someone shorter than he, his luminous face a rapturous mask of surprise, concern and pride.

The gallery was packed with well-wishers and the curious, but his expressions were so much the focus of one’s inquiry that one couldn’t really take in all the artworks. 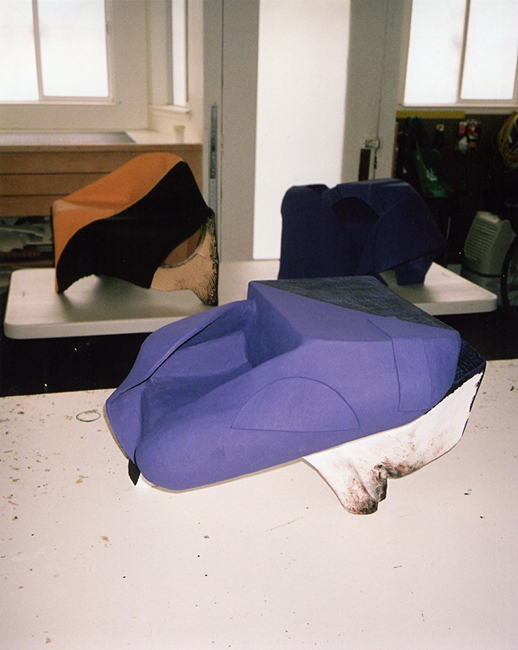 Some of Fectueau’s own recent sculptures, seen in a recent “New Work” show at the Art Insitute of Chicago.

Fecteau and Di Quinzio have experimented with an no-label policy that’s irksome at first, but then rewarding. Instead of walking up to the label first, one is asked to encounter the artwork without a clue about who did what, perhaps in imitation of how one might encounter a work in a private home. Though I do remember one young couple in New York on East End Avenue, who had museum-style signage installed discreetly nearby their dubious Dali prints and their one huge Deborah Kass. But most of the time one sees art it doesn’t have a label attached and one learns to deal with that–and usually you can ask the host, “I love your picture, is it by Stuart Davis?” This is their opportunity either to tell the truth, that their cousin Randy did it at summer camp, or to lie through their teeth and tell you that it is a very, very very, early work by Ross Bleckner and it’s called, “Untitled 1961.”

At the “Not New Work” show there is actually a laminated card, big as the menu you can find at nearly Mel’s Diner, that shows a stylized map of the room you’re in, and ID’s every artwork at one fell swoop. 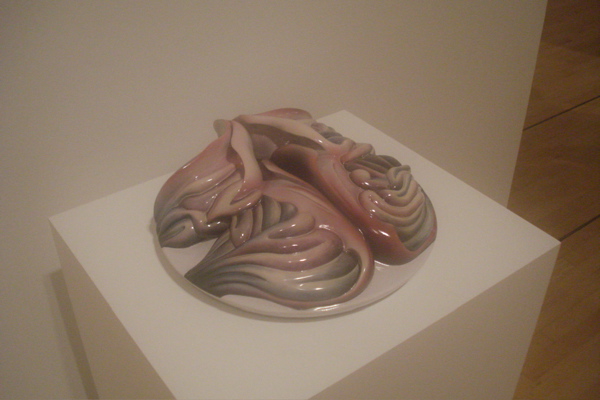 When I went back to the show a second time I noticed ordinary people reacting to the lack of labels with bewilderment. Yes, they would approach the little pedestal where Judy Chicago’s plate sits, then they would look at it, then they’d jump back in terror and remove themselves to another wall. Kenneth Baker has noted the exhibition’s “sexual overtones,” which “crackle within a charged, but muted, psychological atmosphere to which nearly everything at hand contributes.” Well put, Mr. Baker. As I watched the stream of people come and go, I saw maybe one out of every twenty find the discreet rack where the menus are kept. The others just bounced back across the room’s corners as though propelled by the ramps and outlanes of some vintage Bally pinball machine, tilting so violently they were careening into each other and psychic sparks shooting up in the air.

Some of the items resembled Mr, Fecteau’s own sculptures—well, they had Fecteau resonances, the muted colors of one, the preposterous fallout growth of another, the general WTF phenomenology of his own best work. He wants to bring you something you haven’t seen before, something that will take your mind a while to wrap itself around, to envelop you in a way you’re not used to.  And so it is with “Not New Work.” 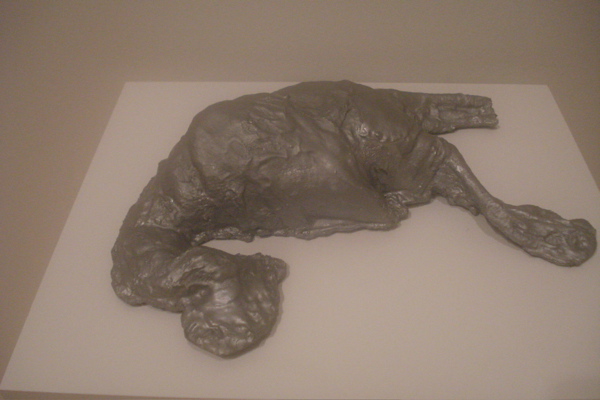 George Segal at “Not New Work.”

George Segal’s flayed silver chicken, sitting on a white shelf, makes grown men gasp, while the smallest Jess painting I’ve ever seen drew a cluster of concerned looks wondering if somehow the picture had been left out in the rain all during the 60s and 70s. “I don’t see anything!” “No, look, you can almost make out, that must have used to be a person!” 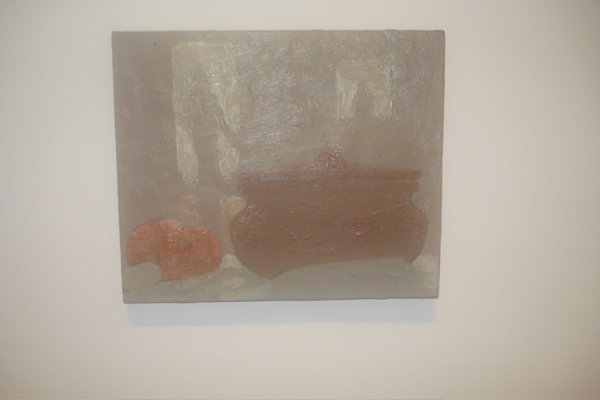