One on One: Jennifer Fletcher on Robert Overby 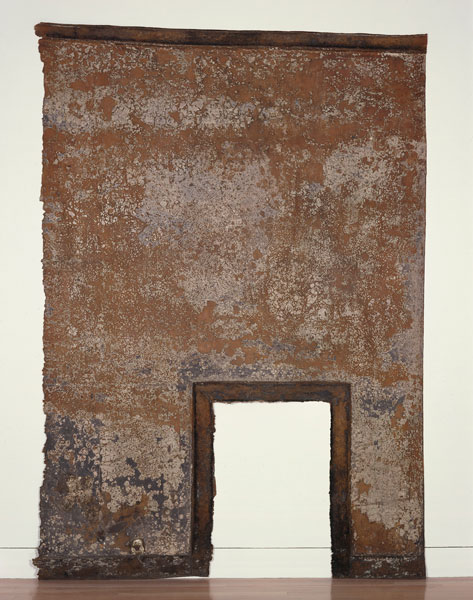 Part two of a conversation, keyed to our One on One series, between Michelle Barger, deputy head of conservation, and Jennifer Dunlop Fletcher, assistant curator of architecture and design, on Robert Overby’s Hall painting, first floor.

Michelle Barger: How did you come to chose Hall painting, first floor for your One on One talk? Were you familiar with Overby’s work as a commercial designer prior to becoming an artist, and did this play into your decision?

Jennifer Dunlop Fletcher: In 2000, I was working at the UCLA Hammer Museum as the curatorial assistant when Robert Overby: Parallel, 1978-1969 was exhibited, so I have been familiar with all the various strains of his work since then, including the graphic design. However, this was before switching from a curatorial interest in contemporary art to architecture. When I was combing through the permanent collection database recently in search of works for an exhibition proposal, I was thrilled to discover that SFMOMA had one of the Barclay House casts.

Even though Hall painting, first floor is in the Painting +  Sculpture collection (and not Architecture + Design), I think it brings up interesting issues related to capturing and displaying architecture. I abandoned the exhibition proposal once I learned that it was on view in Vincent Fecteau’s show, but I jumped at the opportunity to spend some time thinking about this work and how it relates to Architecture.

As you know, an A+D department in an art museum is always working with secondary materials. We can never exhibit a building, only representations of a building. Of course, everyone experiences architecture every day, especially how it defines space and program. Hall Painting, first floor offers an impression of a familiar piece of architecture—a house—using a method I’ve never seen in the field. By creating a cast of a detail from the house—the hall where a painting was on the first floor—one is given a very personal view of an interior. This impression captures details that a photograph cannot—the paint from the walls and pieces of the burnt wood, which reveal an intriguing history of the house.

MB: Doorways and architectural passageways are represented in other early works by Overby, bringing up the relationship between the body and points of access. Can you talk about this relationship in Hall painting, first floor?

JDF: I hadn’t really thought about the door represented in this piece, because I consider this work a fragment of the larger project of capturing the whole Barclay House. But, of course, you are right that most of the other casts are only of doors or windows, and he also did concrete casts of doors. As you mentioned, it also relates to Overby’s other works and interestingly, even the later paintings of (mostly) female body parts with rubber S&M apparel, where the orifices are either covered by latex or are the only body part revealed. I’ve always considered the rubber casts as images of spaces special to Overby;  however, writer David Rimanelli wrote that Overby considered the casts as process art, in which case the works stand as an index to the action. To get back to your question, I wonder about the bodily action in “masking” the house (and finding parts of the house’s skin—plaster, paint and burnt wood—embedded in the cast) as a pseudo sexual act.

I look forward to speaking about the notion of the work as an index a bit more during the One on One talk on Thursday, November 5th at 6:30pm.