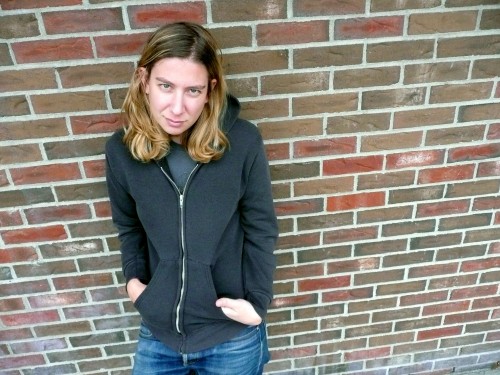 I can tell you a bit about Ariel Schrag because I spent the last 4 weeks introducing her every night on the Sister Spit tour. Ariel grew up in the Bay Area, and did she waste her high school years drinking too much at the Rocky Horror Picture show and falling in love with bisexual witches named Perry? No she did not. Ariel, who went to Berkeley High, began documenting her experience as an out queer in the form of comics. They were ultimately compiled into 4 graphic novels – Awkward and Definition (9th and 10th grade, published in one volume), Potential, and Definition. Potential is getting made into a film by Killer Films, the badasses who brought us Boys Don’t Cry and Hedwig and the Angry Inch. Scarlett Johansson is not really going to play Ariel, that is just a bad joke I made to help Ariel sell her Potential t-shirts at our shows. Ariel used to write for The L-Word, where she tried to get the staff to let her put the annoying main character Jenny on tour with Sister Spit, which is so meta. Like I said on stage every night for 28 nights, it was way better to have Ariel Schrag in the van than Jenny. Every night she would show slides from her comics and narrate them, setting them to music (Aimee Mann, Dead or Alive, Kate Bush, the soundtrack from Rent) and doing the voices, perfectly switching between the frazzled speaking-in-tongues of a crazy man on a park bench, the hysterical pitch of a type-A party-planning lesbian, the timid lilt of her gentle mother, or the bored snarl of a troublemaking girlfriend. She did all this, plus ran the tech every night. Ariel Schrag is a total hero, and storytelling genius whose comics are full of inky life and angst and honesty and hilarity. Her timing for letting a moment hit you is superb, and her nuances are sort of wicked and totally clever. The Contemporary Jewish Museum has brought her around to teach a graphic novel workshop today, November 5th, here in San Francisco, much to the delight of all the Bay Area Sister Spitters who miss their new best friend so much.  Get the details at http://www.facebook.com/home.php?ref=home#/event.php?eid=154764438589&ref=mf

And now here’s a tiny interview:

Michelle: Did your mom name you after the Sylvia Plath book?

Michelle: You totally get the great trick of writing (or drawing) memoir is to expose all the stupid or weird things YOU do. But then how do you deal with having shown the world all your weirdness? Are you in denial? I am.

Ariel: The way I see it is there are two goals: to make something funny and/or to make something relatable. So if you take some really embarrassing or painful experience but you make it funny or express it in such a way that other people sympathize or empathize it’s like everything is OK.  It’s only when people are like, “Uhhhh, I don’t get what you’re talking about at all – what does this even mean??” that it sucks.

It is a little weird though for people to know all this private information about me that I probably would not otherwise have shared so soon. That I try not to think about.  So yeah, denial works. 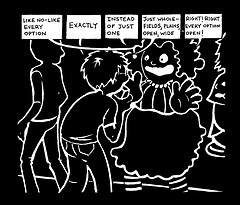 Michelle: Does the world look to you like a series of panels, like storyboarded? When you feel inspired to document an experience is it laid out like that or is it something totally different?

Ariel: When I’m currently working on a comic this phenomenon happens pretty regularly. Events, both current and in the past (or future even) will flash across my mind in black and white comic panels. Never color! If I’m working on a prose thing, though, I find myself describing events in my head in my narrator’s voice. So basically whatever creative project I’m working on tries to take over my general life.

Michelle: Can you talk about the Potential movie, where it’s at right now?

Ariel: It’s moving along! We just got a great new producer, Jamin O’Brien. Rose Troche is directing and she’s amazing. I love working with her. We’re hoping to shoot this spring. 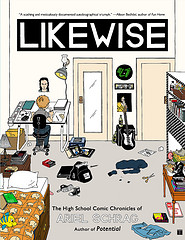 Michelle: What part of the Sister Spit tour would have made the best comic?

Ariel: If I was going to write a comic about tour it would really have to be the whole thing. How everyone got to know each other, switching off between scenes in the van and all the crazy different shows. I can say that astrology would have a very heavy presence.

Michelle: What are you going to teach in your workshop at the Contemporary Jewish Museum?

Ariel: The joys of comics! My lecture is basically just me talking about all the different amazing things you can do with the medium of comics and showing examples from my favorite books. I also have fun exercises to go along with different topics. I really love teaching comics. They’re endlessly fascinating to me.

Michelle: One night on tour I had this crazy dream about goats and it was because of the panels you showed about your own crazy goat dreams. What is the most recent dream you remember?

Ariel: I recently dreamed that I was back on tour and had done my laundry at a hotel but left it in the machine and we’d driven three hours away! I think my laundry represented the tour itself, and it was a dream about being sad that tour was over. 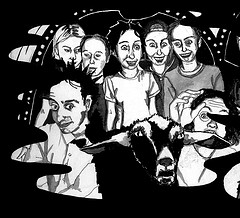