One on One: Rudolf Frieling on Candice Breitz 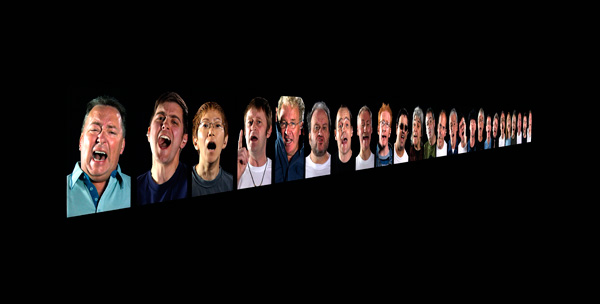 Alongside our weekly in-gallery curator “One on One” talks, we post regular ‘one on one’ bits from curators & staff on a particular work or exhibition they’re interested in. Follow the series here. Today’s post is from curator of Media Arts, Rudolf Frieling.
Do only fans truly understand pop culture? Anyone who has been a fan of one of our global pop stars knows it is the fans that make the star. Candice Breitz has explored—in four different parts of the world—how fans “become” their beloved idol, be it Bob Marley in Kingston; Madonna in Milan; Michael Jackson in Berlin; or, finally, John Lennon in Newcastle, England. I saw Candice Breitz’s Lennon-portrait-as-working class hero three years ago, when it was first shown in Vienna. Today, installed in the Media Art galleries on SFMOMA’s 4th floor, I’m still struck by the way twenty-five ardent Lennon fans have taken on the challenge to sing every single song of his first solo album John Lennon/Plastic Ono Band. The record was released in 1970, the same year the Beatles split up; Lennon was deeply involved in global politics at the time, and working through the traumatic loss of his mother. Breitz’s impassioned “chorus” sings for 39 minutes and 55 seconds (the exact length of the album). Displayed on twenty-five individual screens, Working Class Hero (A Portrait of John Lennon) (2006), synchronizes the fans’ performances in off-kilter harmony; the album’s first song “Mother” linking this piece of collaborative acapella performance to Breitz’s second work on view, entitled precisely Mother (2005). For this second exploration of pop culture iconography Breitz edited film performances by Faye Dunaway, Diane Keaton, Shirley MacLaine, Julia Roberts, Susan Sarandon, and Meryl Streep, creating a revealing composite of the Hollywood cliché of the difficult mother.

While our series of One-on-One talks is typically hosted by a curator “only”, I’m happy to be able to invite you to join me and the artist Candice Breitz in a conversation dedicated to her show “On View: Candice Breitz” before we embark on a more extended panel discussion. The One on One talk starts in the Haas Atrium at 6:30 p.m. At7 p.m. please join us for “More on Pictures, or Appropriation Now” in the Wattis Theater.