Ali Liebegott’s Ducks Are In A Row.

It is 10:56am and we, Sister Spit, have been on the road since about 11pm last night. I made it as co-pilot and navigator until around 5am, drinking the very tallest, fattest cans of Red Bull, sugar free. I learned on past tours that sugar free Red Bulls do not crack one out as hard core as the sugared-up cans. So I got my sugar elsewhere – a six-pack of powdered sugar Donettes, a bag of almond Hershey’s Kisses, a sour apple Blow Pop and a thing of Ding Dongs. I tried to keep the driver alert and entertained by reading her Facebook statuses off my new Google phone, until a series of hallucinations (most disturbingly, seeing myself somehow sitting on the hood of the van like a gremlin on the wing of a plane, though this gremlin was wearing a black bobbed wig) forced me to cfawl into a back seat and attempt to sleep on a pile of coats. I came to somewhere in Oregon, at a rest stop where some nice Lutherans were handing out free coffee and cookies. I’m still wearing my outfit from the show last night, a teeny tiny Spandex-y dress made by local designer Chelsea Starr; a pair of seamed stockings, the seam wound round to the front of my leg, and shiny stiletto shoes. Watching me teeter-totter up the landscaped incline to the rest stop bathrooms, Beth Lisick, one of many hilarious writers in the van, observes that I look like the group has maybe kidnapped me and is allowing me to hit the restroom under their watchful gaze. Loaded up with free, Christian coffee and pastries we return to the road, a This American Life episode playing off someone’s iPod.

If I wasn’t performing in the pacific northwest with Sister Spit this weekend I’d be going to Open Studios, specifically to Art Explosion, the one at 744 Alabama Street. The writer and artist Ali Liebegott is going to be showing a bunch of new work and I love Ali Liebegott’s work. Her books are on my bookshelves and her art is hung on the walls in my bedroom and office. Ali’s books – the book length road poem The Beautifully Worthless and the darkly hilarious alcoholic pancake waitress novel The IHOP Papers – do a wild trick of mixing real, intricate, complicated poetry with plainspoken smart-assed and vibrant prose, mashing up the emotional experience in the process, hurling the reader between uncanny heartache and absurd humor, touching on one page and the next a gross-out, vulnerable and tough and really truly unique, a singular literary voice unafraid to follow her writerly obsession to the next illogical conclusion.

Ali’s art, a product of another obsession, all center around ducks. Not pastoral, realistic ducks, not manly hunting ducks of womanly kitchen ducks, the kind with fat blue ribbons bowed around their necks. Ali’s ducks are hard-drinking and depressed. They are writers, laboring before an old-fashioned typewriter. They hail not only from another universe, one where ducks carry on with the intelligence of a human, but from a bygone era, a time of porkpie hats and stiff martinis. I’ve accumulated a lot of Ali’s art through the year. From the period she was painting portraits of Slim, a real-life duck she befriended at a Rhode Island park years ago, in a variety of hobbies and careers,  have Miss Cleo Slim, a visage of the foul turbaned before a span of diving cards. A Slim-esque duck wearing a gloomy, skull and crossbones birthday hat, is accompanied with the text YOU ARE CORDIALLY INVITED TO MY PITY PARTY. A pen sketch of Slim at Truman Capote was torn from the paper tablecloth at Pauline’s Pizza and stuck above my desk, a study for Ali’s latest, most strangely powerful portraits, a series of reproductions of famous author photos of famous gay authors, all of them sporting duck bills. Not as though someone stuck a fake beak on their heads, a costume gag from Spender’s Gifts, more like the authors are human-duck mutants, their protruding yellow snouts their actual body. It does not have the presumed affect of making the writers look a little silly; strangely and powerfully the writers look strange, powerful, vibrating with an odd intensity, all dignity and nobility retained and perhaps even more so, for to retain dignity while defaced with a duck bill makes that expressed dignity all the more severe. Maybe the beaks are a bit like the fact of queerness itself upon these authors – Jean Genet, Oscar Wilde, Gertrude Stein, Audre Lorde – both natural and defacing, the unlikely source of their dignity as they stare you down over the bright, wide expanse of it. I’ve got three writer ducks hanging over a bookself in my room – David Wojnarowicz, artist and AIDs activist, his bill sewn and bloody like the human’s lips in the arresting, iconic photo. Gertrude Stein, solidly butch before an American flag. Emily Duckinson, prim and contained, nervous and goth, duck-billed. You can’t stop looking at them, trying to figure out how they can be so delightful and not a joke, so commanding in spite of the absurdity. Since I can’t be at Art Explosion this week to check out Ali’s newest batch (including the addition of Carson McCullers and a new series of teensy, prehistoric duck cave paintings) I decided to interview her from the road. 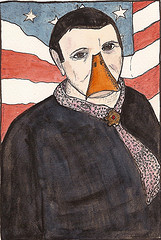 When and where and why did you start painting?

I think I’ve had various points in my life when I was interested in visual art– I took a drawing class when I was 22 and then another one in college maybe when I was 27, and then I always took free art classes when I taught at the community college. I remember my roommates at the time I was in my early twenties were very into visual art, and they encouraged me.  I come from a family where no one does visual art so I just thought you had to draw a certain way for it to be good. But my roommates really encouraged me to do my own thing.  I had a lot of crazy energy and I remember getting charcoal and just really digging into paper.  I think it was very therapeutic for me when I first did it.
You were already solidly a poet when you began painting. In what ways did that spur or confound you?

Painting and drawing was very relaxing for me, because it’s like a different part of the brain.  Especially when I first started drawing, I remember four hours had gone by and I didn’t even notice. I always noticed if four hours went by when I was writing.  And also because I was new at visual art and not very talented, I had no expectations of myself and could therefore enjoy it more than writing. The longer I’ve done it, the more expectations I have for myself, and the less fun it’s become.
Who are your visual influences? What other sort of media or ideas or people influence your painting?

One of the very first artists that moved me was Kathe Kollwitz. I like Francesco Clemente. I like sad watercolorists.  Marguritte Dumas I think. I really was moved by Van Gogh. Lynda Barry of course for being Lynda Barry.  Lisbeth Zwerger I think.  I wish I knew more about artists.  I like artists who understand color as mood.  Whatever that means. 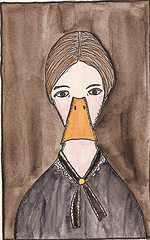 What is the relationship between The Crumb People, the graphic novel you are creating about a depressed duck feeder,  and your queer literary ducks series?

I think I just got on to the duck thing and now I’m stuck there.  And in a way it just seems good to stay there.  I feel like one of the things that visual art allows is just the complete permission for repetition and obsession. So I’ve been drawing ducks for eight years now and they’re just taking on all these different forms. The literary ducks are so personal. It’s like the duck to me is the most noble and heralded.  And then to make that duck into a portrait of my favorite writer is like me trying to bow down and say thank you. Maybe the literary ducks are more tributes.  And the Crumb People is definitely a story.
What duck are you working on right now and what’s it pile?

I haven’t been drawing as much as I’d like because I’m trying to ring up cat food at the grocery store and finish my book length poem. That said, I’ve done a few sketches of a Carson McCullers Duck. There’s a guy in my studio space that works at Loew’s in the tile area and he brings in all these tiny squares of tile in, like bathroom tile.  So I took some out of the garbage and am making a wall of miniature one by one and two by two inch duck paintings that I’m calling Lost Cave Paintings.  And they’re all going to be ducks with black eyes, but in the style of an early cave drawing. I’m also trying to finish two acrylic paintings on canvas. One of a boxing duck with a black eye and his trunks say “Maricon” which is the Spanish slur for faggot.  It’s a portrait of the boxer Emille Griffith who was a boxer in the 1960’s and actually killed another boxer in the ring who called him a maricon before the fight.  I’m also doing a portrait or a duck in a pink cardigan with a black eye, and a large acrylic painting of a Gertrude Stein duck.  I wish I had more time.

For open studios I’ll be selling all these and also pages from The Crumb People.  In addition, I’ll be setting up my manual typewriter and writing poems on the spot for people.

Oh my god,  poems on the spot! I’m missing everything on this damn tour. Visit Ali and her ducks on the 3rd floor at 744 Alabama Friday between 7-11, and Saturday and Sunday between 11-6.