I’m in Linz, Austria, at Ars Electronica. The festival, now in its 30th year, remains the definitive art and technology gathering, although that status is being challenged by newer events such as Transmediale in Berlin and our own Zero1 in San Jose. Though its practitioners come from nearly every continent, the field of media art remains quite small. Ars Electronica definitely has a hint of insider-y love-fest about it. At the same time, it sometimes feels like a desolate outpost on the contemporary art map. 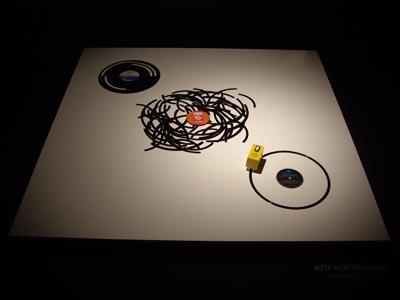 The projects on view range from high to low-tech, from micro scale to the skins of whole buildings. It’s astonishing how many different approaches to art-making can be called “media art.” Perhaps not surprising though, because really, what art does not use media? It’s becoming clear that the distinction between media art and contemporary art is tenuous at best.

My favorite projects so far have been the low-tech ones, such as Yuri Suzuki’s clever deconstruction of vinyl records into whimsical sound pieces. Cutting apart the vinyl, Suzuki rearranges it into tracks for little cars equipped with record player needles and wireless amplifiers. When they move, playful sounds emerge.

There’s a lot more to take in, and I’m just getting started. I’ll be posting pictures and more impressions here, as well as on my personal blog.