One of the country’s longest-running nonprofit arts centers has just announced that its “continued existence is in serious financial jeopardy.” While dispiriting announcements like this are common enough during the current economic recession, this loss promises to be particularly devastating. Founded in 1974, the organization has been a center of the San Francisco arts scene for the last three decades and more; it has served in that time as a vital laboratory for conceptual art, poetry, installation and performance – which practices found little purchase in mainstream institutions in the Bay Area in the Seventies and Eighties – as well as a crucial point of contact with the national and international artists who were shown there. 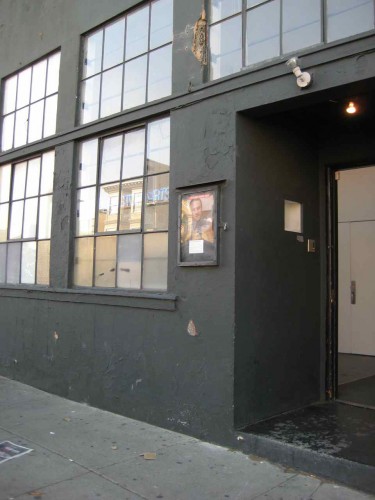 Recent years haven’t been easy. In a review I published in Frieze in late 2007, of an exhibition at Langton by the Mexican artist-collective Tercerunquinto (an interview by curator María del Carmen Carrión here, another review here), I put forward the idea that the institution was then already at a decisive moment. I wrote,

“For non-profit organizations such as New Langton, ‘economic uncertainty’ is inevitable. Founded in the 1970s to capitalize on new forms of federal funding in the USA, these institutions found themselves in trouble when that funding largely dried up around 1990. There are other kinds of uncertainty too: New Langton’s founding purpose was to foster forms of art practice not then supported by museums: performance art, Conceptual art, video, installation, improvised and electronic music, poetry and so on. Now these forms have faded from view or been incorporated into the larger and more established museums, leaving the non-profit just one exhibition space among many. In the present New Langton must do more than support itself – it must figure out why it should survive.”

I hoped then that the board, and director Sandra Percival, might see Tercerunquinto’s project (and my review) as a kind of challenge: not only to raise money, but to re-imagine Langton’s role in the arts community, to locate and support forms of practice not addressed or exhibited adequately by larger institutions like SFMOMA and Yerba Buena Center for the Arts, and to pursue new audiences and new roles for itself. It doesn’t seem from outside that these questions were engaged within the institution; certainly they were not engaged effectively enough. Indeed it sometimes seemed as if the institution was moving in a conservative direction, considering its history (less poetry, less community, less chaos). And by largely showing artists who had been recognized and legitimated by institutions elsewhere, Langton lived problematically in those institutions’ shadow.

This was in many ways a losing gambit. Percival’s letter of resignation, which she sent out to many in San Francisco’s artistic community, attributes Langton’s current distress to “a ‘perfect storm’ that we have encountered since last fall’s climactic economic events.” Judith Williamson teaches us to be on our guard whenever the economy is naturalized in metaphor – you know you’re about to be handed a bill of sale. Percival’s letter rightly takes credit for the institution’s achievements during her tenure, including many compelling shows and events, and a stunning renovation by architect and board member Kyu Che. (It also includes some events whose credit ought to have been shared with the “small staff” who goes unnamed in her letter – for the record, Carrión, Sam Spiewak and Zoe Taleporos – or guest curators like Anne Colvin, Pamela Wilson-Ryckman and Jill Dawsey.) Yet if, as director, the achievements are hers, then so are the institution’s disappointments and missed opportunities; we can’t blame everything on the weather.

Her departure presents the board, and San Francisco in general, with another crisis, in its ancient sense of a “decisive moment” or “turning point.” Can Langton survive its current predicament? Should it? In what form? We must ask not only “what now?,” but “why?” and “for whom?” Proximity Magazine published in May Joseph Del Pesco’s interview with Renny Pritikin, who, with his wife Judy Moran, directed Langton for its first fifteen years or so. He says, “My friend Anne Focke, who started and/or gallery in Seattle around the same time we were building New Langton Arts, was visiting recently, and we asked ourselves: “If we were starting again today, what would we do?‘” This moment of crisis, and the “town hall” meeting Langton promises, will offer all of us the chance to ask their question with renewed intensity.