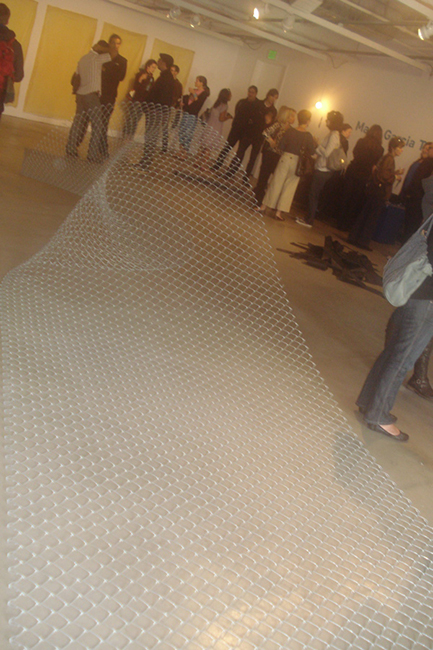 I went to the Wattis Institute at CCA (California College of the Arts, in San Francisco) on Tuesday to see the opening of the latest installment of the “Passengers” exhibition, which seems to have been up for years now without ever losing any of its ungraspability and alterity. Someone must have a map of how “Passengers” works (possibly lean, saturnine supercurator Jens Hoffmann, b. 1974) but as for me, I’ve never understood it except that it’s modular, like the furniture in an old IKEA ad. It’s been up so long that now it’s known (jocularly?) as the “Exhibition Formerly Known as Passengers.” Anyhow there’s always something new going on, and this time around it’s both new and old at the same time. 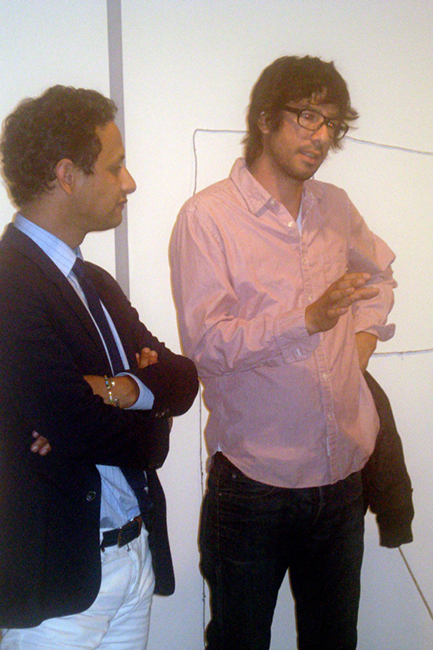 Mario Garcia Torres (b. 1975) is a Mexican-born, Los Angeles based artist and writer with a healthy interest in interrogating the myths of conceptual art as they grow and twine in the shadow of specific time-based practices.  (You can read Chris Fitzpatrick’s Art in America interview with MGT here.) 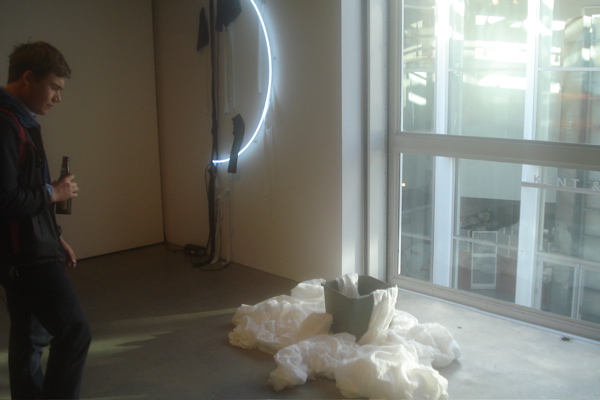 Garcia Torres’ idea for “Passengers” was to reproduce a famous gallery show of the late 60s, 9 at Leo Castelli, largely by fabricating all of the objects shown there, including some that have become iconic indeed. (Eva Hesse, Bruce Nauman, Richard Serra, Alan Saret showed some of their most representative pieces there.) 9 at Leo Castelli, curated by Robert Morris in the winter of 1968, was the fruition of Morris’ ideas about “anti-form” and marked an important step in the way we think about conceptual and minimalist art. As the title indicated, nine artists participated, but Garcia Torres asks us to step back and involve other artists in the mix, including curator Morris himself, as well as artists he invited to participate but declined (or refused, like Joseph Beuys), as well as the standout case of Puerto Rican artist Rafael Ferrer, who came along to Castelli’s warehouse with some “assistants” (read cronies), to scatter bushels of autumn leaves on the staircase of the building. 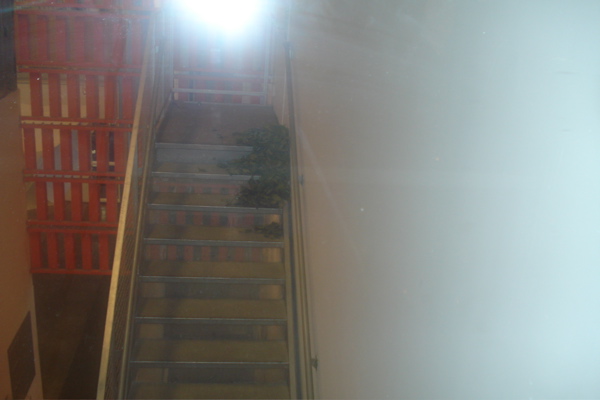 Oh, my terrible picture and you can hardly see the leaves on the stairs! You will have to go see it in person.

This “intervention” was sort of/possibly/never authorized by Robert Morris, a friend and mentor of Ferrer’s, and in the present show, there’s a pile of green leaves on the staircase leading up to the top floor of the Wattis Institute, in homage to Ferrer.

The artist was asked about the quality of the reproductions of the original work. Some of it was pretty excellent, but some pieces are markedly smaller than the original they mimic, and some just look silly,—you giggle when you see what was originally molten lead poured onto the wall and floor of Castelli’s warehouse space. I can’t even describe what it looks like now, refabricated out of—what—house paint? 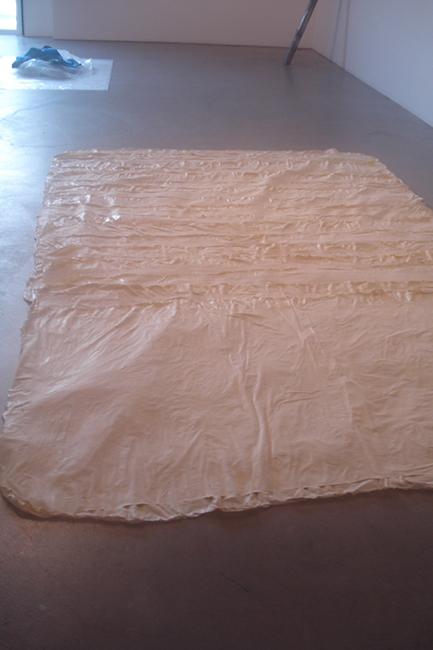 Julian Myers pointed out that in 1968 the original show would have had a very different effect, since it came at a time in a particular conversation about sculpture, —really sort of a ritual cleansing of the form, and its shock if you like could never be felt today. Why even propose such a restaging? As Julian was speaking it seemed to me that the conversation in the air around 9 at Leo Castelli would have also been about the VietNam war, and I stood there getting the kind of oh my God chill experienced by Jim Caviezel and Dennis Quaid in my beloved Frequency movie–like I was there, and VietNam was still raging in the Far East, but activists and artists were bringing the war home. Everything looks like VietNam to me, perhaps because we are living of course in wartime still. The notorious Richard Serra piece, in which a square of lead is held up some feet above the floor only by the pressure of a steel pole triangulated like a spear, must have seemed, to gallerygoers of the day, exactly like the domino theory that was then the official reason for our presence in Asia: the lead square as democracy, held forcibly in place by the steel pole of active military engagement. You know how when you apprehend something, you can’t believe that no one else understands what you’re seeing? 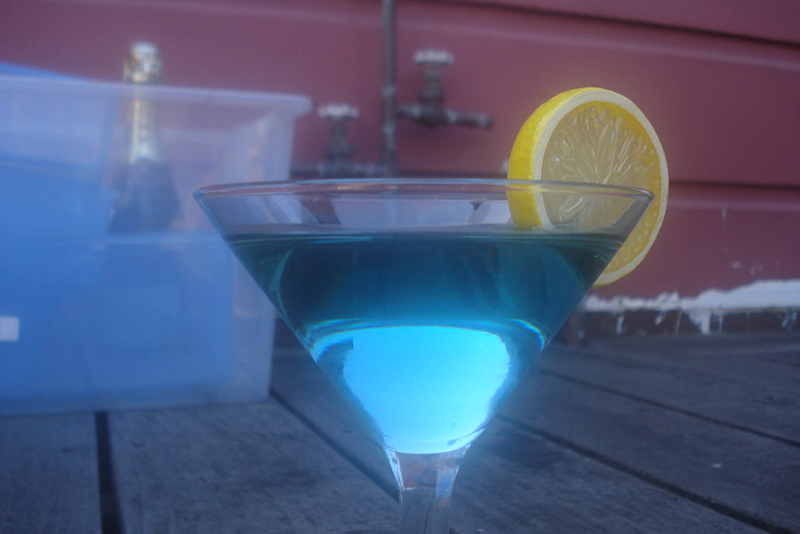 If only I could still drink!

I had met Mario Garcia-Torres here and there, but never got a chance to work with him until curator Raimundas Malasauskas assigned us both roles in his production of Francis McKee’s imaginative stage reconstruction of Clifford Irving’s life, Phantom Rosebuds, a drama of sorts in which I played the lead, and for which Garcia-Torres created a fantastic prop. This was a blue cocktail I was to brandish on stage, and pretend to drink from, though it’s 100% plastic I’m pretty sure. Though when I tried to take the glass in through Canadian customs for a Vancouver performance, Customs took me aside and asked me if my “prop”‘ was made out of plastique!  Sinister difference there.  Anyway, once he (MGT) had made the cocktail, he also suggested a line of development in the script in which this cocktail was to be referred to again and again—usually obliquely. Poetically, perhaps an “objective correlative” to Irving’s lifelong search for purity through iconoclasm. Happily for me I got to keep my “Helga Hughes cocktail,” and I turn to it often whenever I feel down. One further point, Mario has really long feet, so getting a pair of shoes is a big deal for him. Check out these “Mancini Acqua” shoes by Paul Smith, purchased half an hour before his opening at the Wattis. I liked them so much I brought my iPhone down to Paul Smith on Saturday and showed the clerk who sold me the very same shoes! But these are MGT’s feet, not mine. I’m a little smaller, in this one way. 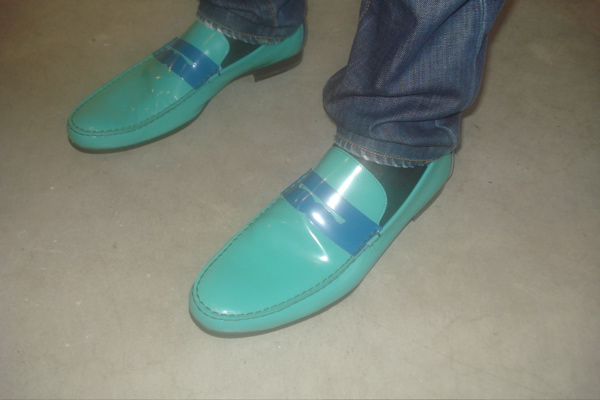