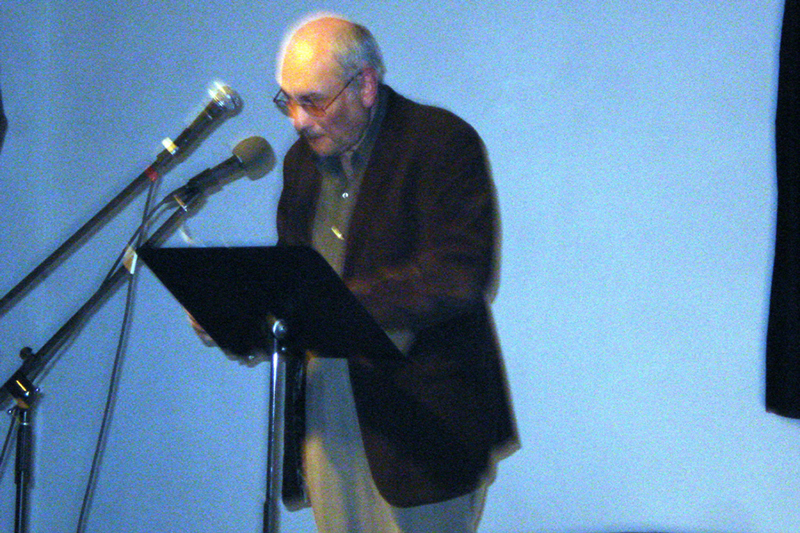 Charles Bernstein is a poet, professor and theorist, and he co-edited the influential journal of poetics called L=A=N=G=U=A=G=E back in the heroic age of Language Poetry (1978-81). Recently he got the art world up in arms when he published a provocative article in Parkett magazine, the spring issue with Zoe Leonard, Tomma Abts, Mai-Thu Perret. Bernstein’s article asks, “Is Art Criticism Fifty Years Behind Poetry?” and pretty much says, yes, indeed it is, or more so. This question may sound vaguely familiar to some of you out there, for it is a reversal or takeoff on Brion Gysin’s remark that “Writing is fifty years behind painting. I propose to apply the painters’ techniques to writing; things as simple as immediate as collage or montage.”

Beneath the impudence of its trappings, Bernstein’s essay is a review of a recent book by New York-based poet and art writer Lytle Shaw, his 2006 monograph Frank O’Hara: The Poetics of Coterie (Iowa). Shaw’s subject is the peripatetic O’Hara (1926-1966), the poet everyone loves to love, but his bigger project is the reclamation of coterie, for many years—all through modernism in fact—the worst word in the world, the word that doomed whomever it was applied to. Pavel Tchelitchev, for example, one of the most interesting painters of mid-century, but now known only as a “coterie” painter. And most often “coterie” refers in a totally arch way, to homosexuality—that which may not be spoken. 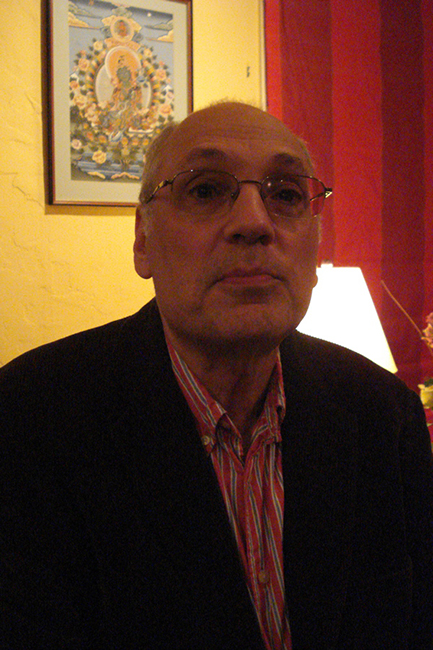 Bernstein reads Shaw almost as though he were viewing a picture—one of those really long long canvases perhaps by James Rosenquist, and sees the drift of the book as leaving Coterie, like leaving Cheyenne, and arriving at a place of discussion of today’s art criticism.

On a recent visit to Oakland (or were we in Berkeley?—it’s hard to distinguish the boroughs)—Charles Bernstein was kind enough to answer a few questions about his essay. I told him I was on assignment from Open Space and he seemed to swallow that gravely enough. “As you know, Kevin,” he said, “I’ve written about art for ages, and Susan (Bee, his wife, who accompanied him on this trip west) is a painter, but somehow this one article has really gotten people talking.” 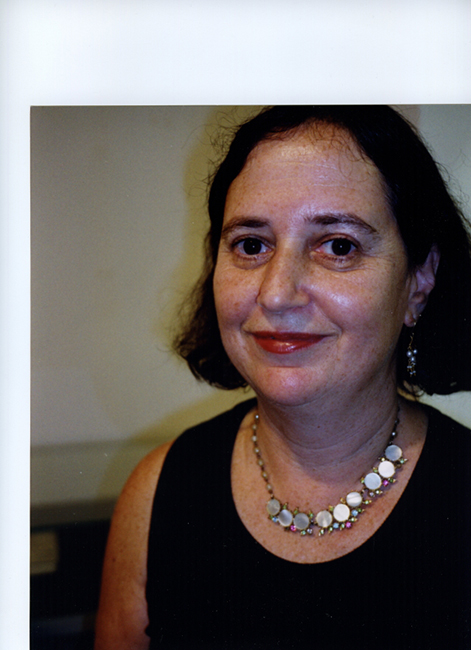 Several strains of contemporary thought, he explained, led to his denunciation of what he views as the prevalent school of art writing. As he writes in Parkett, “Shaw sees O’Hara’s art writing as a powerful and necessary counter to the monological and hyperprofessional rigidity that descends from Clement Greenberg (who dismissed O’Hara’s art writing) to Michael Fried and, I’d add, extends to the October brand, the epitome of, let’s just say, High Orthodoxical art criticism. For if the luminous rigor and prodigious insights of Greenberg and Fried end in the tragedy of misrecognition, the self-serious vanguardism of the High Orthodoxical ends in the farce of academic gate-keeping and market validation. In other words, Greenberg’s and Fried’s insistence on conviction and agonism morphed into a practice of regulation by exclusion.” It was the “dogmatism,” he told me, of critical practice that has led to the virtual suicide of art writing.

The poet Michael Palmer stood nearby and nodded thoughtfully. “And the way they excoriate the poet-critics!” Someone standing on the moon could identify Michael Palmer by his body language alone: the arms crossed, three fingers rubbing his chin, the look of complete involvement and concern.

“But you evoke Brion Gysin with your title, and yet you manage to erase him right out of the discussion.  You don’t even name him.” 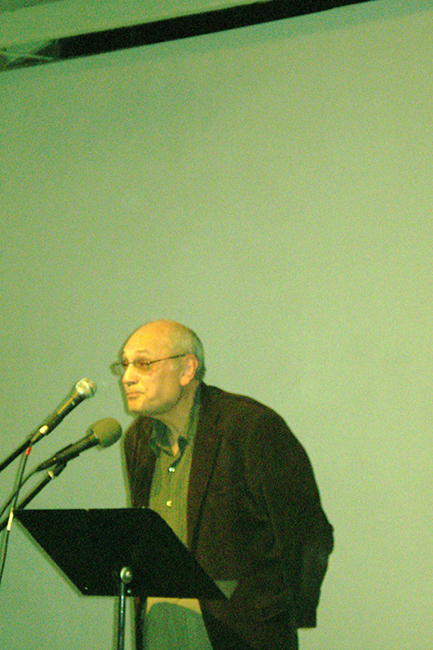 Bernstein warmed to his subject. “I love Kenny, Kenny Goldsmith, but how many times have I gone to a reading by him and heard him say that poetry is fifty years behind art!”  We snickered.  “Well, he doesn’t do that any more ‘cause I jumped up so many times.” He shot his hand into the air in parody of the eager schoolboy dying to correct his teacher. “It’s ridiculous! Then people point to the difference in market value between a Jackson Pollock and a Jackson Mac Low but there are all sorts of reasons for that and yes, maybe it’s about penetration. And that’s not to say that among the very worthy art writers writing now, people we all know, people in this room, there’s not some brilliant writing . . . “ At that moment the lights in the parlor where we stood flickered on and off, and Susan Bee could be seen behind us firing up a projector and getting ready to present a magnificent slide show of her work on canvas and as a book artist. At that point Bernstein deferred to the painter in the family and Bee’s luminous colors manifested themselves onto the screen in the room where we were in Oakland or Berkeley. 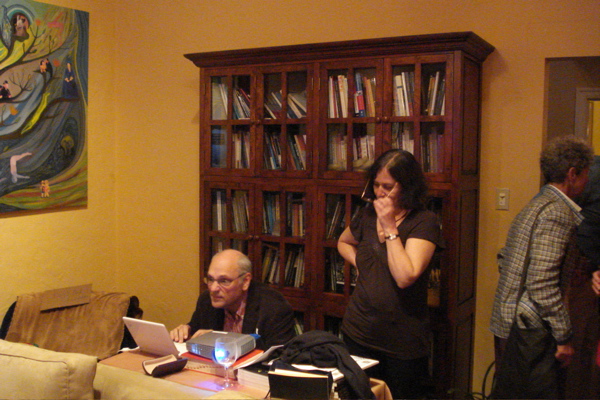 Oh, and here is a picture by Susan Bee from 2007, called “Eye of the Storm.” It’s big (48 x 51) — well, not super big but it would take up most of my apartment. But I think it would look ace up on the walls of the San Francisco Museum of Modern Art! 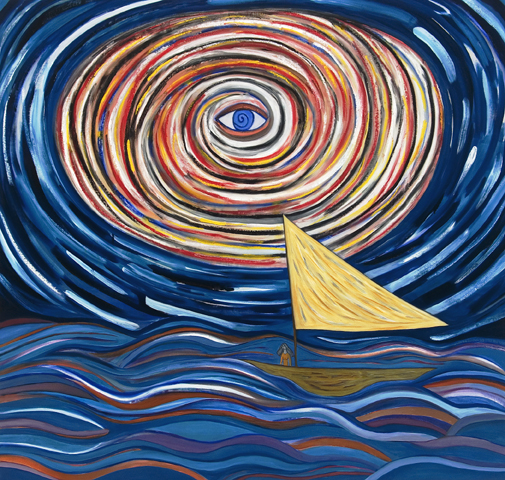 Then at Bernstein’s reading at 21 Grand in Oakland I remembered to ask one of those tough Vanity Fair questions that are my trademark. I asked him what he wanted to be, when he was a little boy. “I guess a singer,” he replied. “Oh! A rock singer?” His brow creased. “No, not a rock singer, you’re talking about when I was little! More like–well, someone who sings show music.” “Like Robert Goulet?” “Well,” he said helplessly, “not exactly Robert Goulet, but someone like him–a pop singer, say.”