Sherrie Levine, In and Against Collage 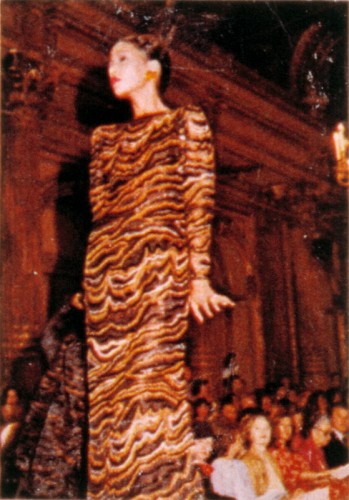 Displaced and isolated by Levine, however, they become detailed anthropological studies of the scenes they depict – the attenuation of the models’ poses, the baroque architecture of the room, the half-distracted audience, the picture of class and luxury the outfits convey – even as blur, size, rasterization and faint scuffs defy our examination and mark these as mass-media reproductions, images of images. Works in Levine’s signature style – a “rigorously conceptual and coolly aesthetic practice,” as Bishop puts it, indebted to Marcel Duchamp and pictorial nominalism – are across the room. In the context of such rigorous and cool production, the Fashion Collages might seem anomalous: paths-not-taken, “early works.”

But what if we read them instead as central, foundational? They might allow us to think of Levine’s productions more generally in their relation to collage – to imagine that Levine works in and against collage’s formal-conceptual operations.

As an art historian I often think out my ideas first in pictures, experimentally moving reproductions into sequences and constellations, relationships of similarity or opposition. (A decade ago this happened on a slide-sorter or slide-table; now it happens, in numbing fashion, in presentation software.) What follows, then, attempts to retain the experimental quality of images in stacks, rows and piles – even as I want to show what it is about collage that Levine aims to work against. 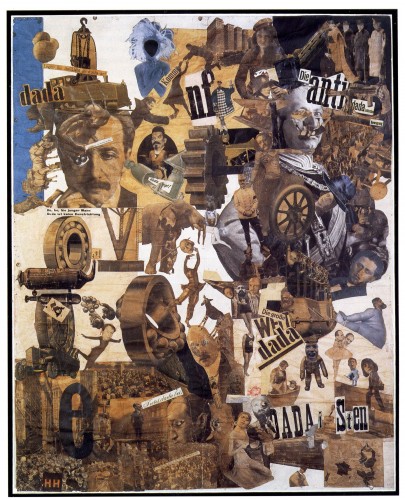 Hannah Höch’s Cut with the Dada Kitchen Knife through the Last Weimar Beer-Belly Cultural Epoch in Germany (1919-1920), collage means cutting fragments from multiple locations in the print universe, and bringing them into a new (and decidedly more chaotic) formal matrix. The rectangular field here is like a painting, a flat arena on which to sort, arrange, compose. The result is like a newspaper or magazine intensified – greater density of images, declarative cut shards of language – and destroyed. The cacophony of the picture signifies, and dwells upon, the social disorder left in the wake of Germany’s failed left revolution in 1918-19. 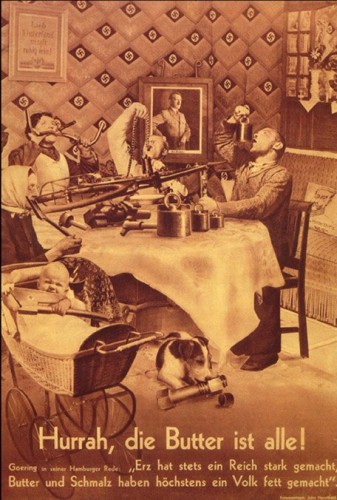 Originally published in Arbeiter-Illustrierte-Zeitung (Worker’s Illustrated Newspaper), John Heartfield’s anti-Nazi photomontages put the chaotic chatter of earlier Dada collage to propagandistic work. Using the principles of collage and montage, Heartfield, in collaboration with his brother Wieland Herzfelde and others, staged photographs subsequently cutting them together or superimposing negatives to create a single “scene.” (Here a pointed critique of the Hermann Göring’s suggestion that “Iron ore makes an empire strong – butter and lard have at most made it fat.” Now that their butter is gone, the nationalistic family cheerfully scarfs down a bicycle, while their baby is teething on the blade of an axe). The results of this formal manipulation look somewhat realistic at first glance, yet completely off-kilter and out of joint on closer examination – an appropriate figure for the dire circumstances Heartfield’s designs were meant to diagnose and attack. 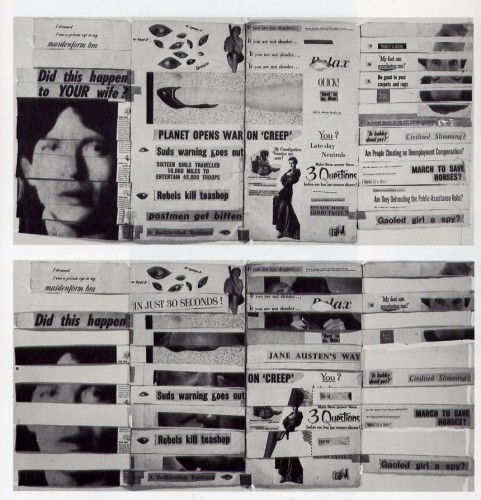 John McHale, Page from Why I Took To The Washers In Luxury Flats, 1954. Collage-book, Collection of Magda Cordell McHale

Recalling the early meetings of the Independent Group in London, British painter William Turnbull described the way that popular magazines had, by the 1950s, embraced completely the “irrational” order of avant-gardist collage: “Magazines were an incredible way of randomizing one’s thinking,” he said, “Food on one page, pyramids in the desert on the next, a good-looking girl on the next; they were like collages.” John McHale’s collage book, produced during this period, would seem to illustrate this situation in some ways, by pushing this “randomness” even farther along. An intrepid reader broke the magazines’ layout into fragments, crosscutting images and breaking down aphoristic headlines. With his collage-book, McHale makes visible the saccadic character of reading such randomized fields (not far from scanning from window to window in a browser, as you may be doing as you read this). Reading, in its modern sense, is cutting.

Levine’s collages have things in common with these touchstones. Like them they have a critical relationship to a thriving print culture, and they depend, as do my other examples, on the “cut.” And if, unlike the others, Levine carefully respects the rectangular boundaries of the image, her collages do mean to mark  the collage-like divisions within the fields of the image. The space of the room is estranged. The audience behind the model isn’t gobbling down bike parts, but they may as well be.

Connecting Levine’s series to these earlier works brings into view what makes them unique, too. She avoids the crammed look of Höch, and eschews text, propagandistic or otherwise. She doesn’t cut through the images themselves. She wants to give them singularity and self-sufficiency – an integral character that their “collage-like” magazine might have drained away. If they are meant to be seen one after the next, in their exhibition form it is impossible to see more than one at a time. We’re meant to look close – to lean in – to hold our gaze – as if we’re looking at a Holbein. Not for her the restless eyes demanded by McHale or Höch.

Speaking of Levine (along with Robert Longo and Troy Brauntuch), the art historian Craig Owens wrote in 1980 that “the manipulations to which these artists subject such images work to empty them of their resonance, their significance, their authoritative claim to meaning.” The Fashion Collages show this to be a preposterous claim in Levine’s case – these may be simulacra, but they’re charged, dense, full of visual information. It’s easy to forget that simulacra are seductive, to think of the world of spectacle as something drained and draining. But these collages – precisely in their disconnection from a manic, randomized system of images – remind us powerfully of the seductive force of pictures. 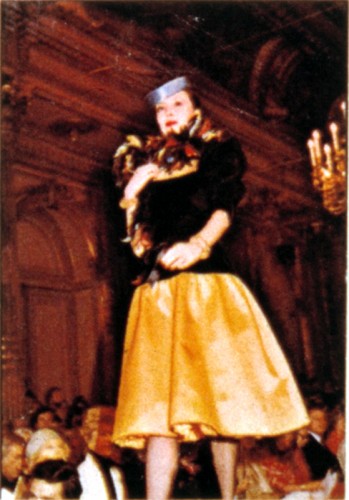 Owens got it right in a review from ’82, included in his great collection Beyond Recognition as “Sherrie Levine at A&M Artworks,” which I’ll quote here:

Her purloined images have invariably been emblematic, allegorical; Levine does not represent women, the poor, or landscapes, but Woman, Poverty, Nature… She is not, however, primarily interested in these subjects per se, but in images of them. This is the primary motive behind her strategy of appropriation: she does not photograph women or landscapes, but pictures of them, for we can approach such subjects, Levine believes, only through their cultural representations.

So far so good – but it’s the next paragraph that nails it.

What is more, these are subjects that exist outside a dominant cultural order, which casts them as “Other.” All of Levine’s images have been images of this Other; she consistently focuses on the mechanisms whereby our own animal instincts, our bestiality, are externalized, projected onto another – the opposite sex, another social class, or nature in general. Externalized in an alien and alienating image, our drives come to appear to us as universal and natural forces which must be controlled or repressed, either directly or symbolically, through both ritualized and nonritualized forms of representation.

The ritual we are looking at of course is the fashion show; the women are clad in leopard prints and feathers, “natural forces to be controlled or repressed.” But also, and perhaps paradoxically, to be imitated. These are “models” after all. This is the real substance of Levine’s feminism, I think; it’s not in her jockeying for position in a male-modernist pantheon, nor in her “purloining” of images – but in her subject matter.

These are only up for a couple more days;  it will be some time before they appear again. See them now, while you can.