One on One: Alison Gass on Kiki Smith

Alongside our weekly in-gallery curator “One on One” talks, we post regular ‘one on one’ bits from curators, staff, and public, on a particular work or exhibition they’re interested in. Follow the series here. Today’s post is from assistant curator of painting and sculpture Ali Gass. Thanks Ali! 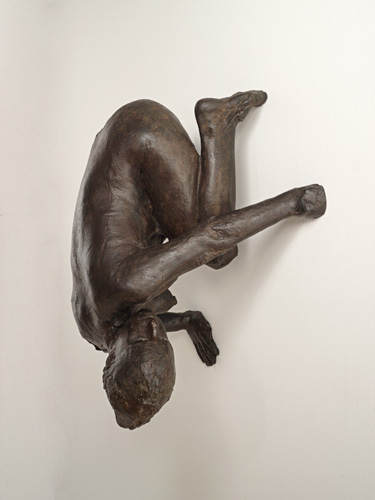 Kiki Smith’s Lilith crouches and hangs in a precarious position of emotional and physical tension. The sculpture is a life-like figure of a woman. (Indeed, Smith’s mode of making the work heightens this naturalism, as she cast an actual human model in her studio in clay and then constructed the final form from bronze). This woman’s form moves into the realm of inhuman creature-hood, however: clamped onto the wall in an upside-down crouch reminiscent of a cat ready to spring, or an insect or a bat adhered in a gravity-defying pose. The surface of the work echoes the formal modeling of earlier western figurative sculpture. The “S” twist of the body pulses rhythmically, creating a curvilinear flow from neck to hip, reminiscent of an Italian renaissance sculpture’s perfectly continued fluidity. However, the surface of the bronze is more like a 19th century casting. It is imperfect in texture, evidence of the clay and finger marks of the sculptor appearing in the metal form.

The way the work is positioned might feel physically precarious to the viewer, as the artist hides any evidence of the way the sculpture is attached to the wall. One can intuit the heaviness of the bronze, yet the work appears to balance easily against the flat surface of the wall. This sensation of being unsettled that is triggered by the impossible lightness is heightened by closer inspection of the details of the work. Smith has inserted extremely natural-looking glass eyes into the head of this form. Their icy blue irises stare penetratingly back at the viewer as one gains intimate access to the form’s face. The lightness of the eyes contrast dramatically with the darkness of the bronze, and the seeming life behind their surface is in stark contrast to the obvious artifice of the metal skin and body contours. The eyes feel too like that of a creature about to attack, seemingly trapped in an emotional split between feeling threatened and being threatening. 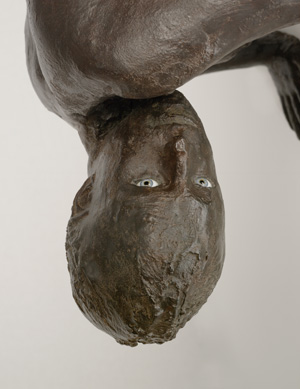 The title of the work brings additional meaning to these formal artistic choices. Lilith is a biblical figure who has long been adopted by feminists. In Jewish lore, she is the first wife of Adam, exiled from the Garden of Eden for her unwillingness to bend to Adam’s will, and is ultimately replaced by Eve. In this mythical story, she is cast out and becomes a demon bringing death and disease to those she encounters throughout history. Feminist literature invokes her image as a woman literally demonized because of her unwillingness to be subservient. Lilith is thus both a sympathetic and a terrifying figure.

Please join me on Thursday June 24th as I lead a One-on-One tour discussing this powerful and complex sculpture. I plan to discuss the ways Kiki Smith’s work is marked by her ability to find the nuances of both femininity and humanity, and to bring those details to the forefront in ways that point to the beauty and grotesquery potentially inherent in each. Much of the artist’s greatest work folds human and animal forms into one another. Here, she has indeed created a body that challenges both the traditional notions of figurative sculpture as well as the traditional depictions of the female body and idealized femininity.