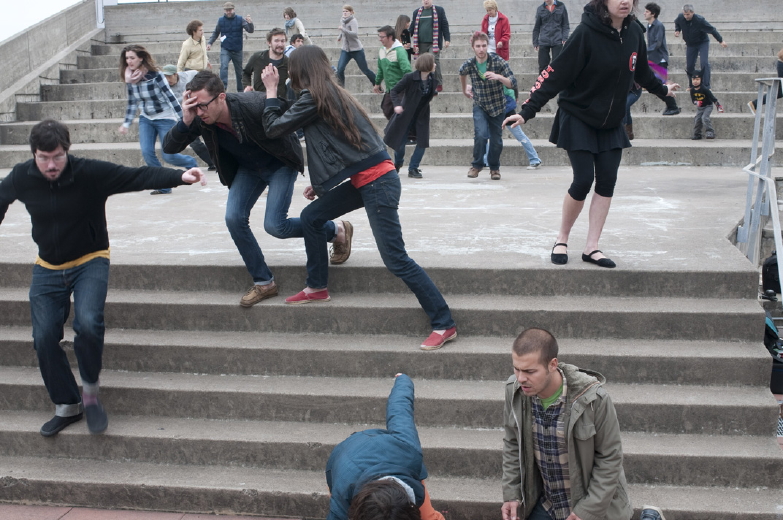 Last month I got to play an iconic figure of cinema when the San Francisco-based artist Kota Ezawa recruited me, and dozens of others, for a forthcoming project. He was planning, he said, to recreate the famous “Odessa Steps” sequence of Sergei Eisenstein’s 1921 silent film Battleship Potemkin. I would play the old lady who gets her glasses broken.

Would I do it? Hell yeah! I have worked with Kota many times and always had a ball. He is one of the most imaginative and perceptive artists around. I trust his instincts more than I do my own, so even if I don’t understand why he wants what he wants, I generally fall in. And I embarrass him by telling him is he is my culture hero—a variation on the “science hero” of the Alan Moore comic books—or as they say in his native Germany, he is my “held.” When he confided years back that he planned on making a full length animation of the infamous “sex tape” of Pamela Anderson and Tommy Lee, in which I would play the unctuous preacher who married them, I just said, where do I show up? A version of this animation, “Two Stolen Honeymoons Are Better Than One,” was part of the exhibition he presented at the SECA Award show at SFMOMA back in 2006. 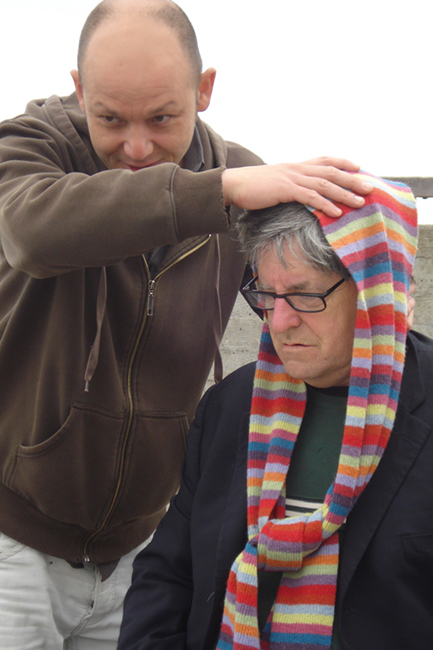 Putty in the hands of Kota Ezawa. Note the artificial gray in my hair.

A pair of young writers were visiting San Francisco from Scotland and I lured them in with me, telling them this was the sort of opportunity they would remember the rest of their lives. I don’t know if they believed me, but Colin Herd and Reuben Sutton were standing on the curb of their hotel at 8:30 on a miserably bleak Saturday morning when I came to fetch them. The weather was so wretched it was just like Odessa—or Edinburgh—perfect for filming, the production team told us. We assembled at the San Francisco Art Institute in North Beach, on Chestnut Street, where up on the very roof there are a couple of flights of broad, low steps that if you squinted looked sort of like the ones in the Eisenstein film. Colin and Reuben gamely took up spots on the steps, matching their arms and legs to the grainy blowups that Kota and his camera people squinted at. 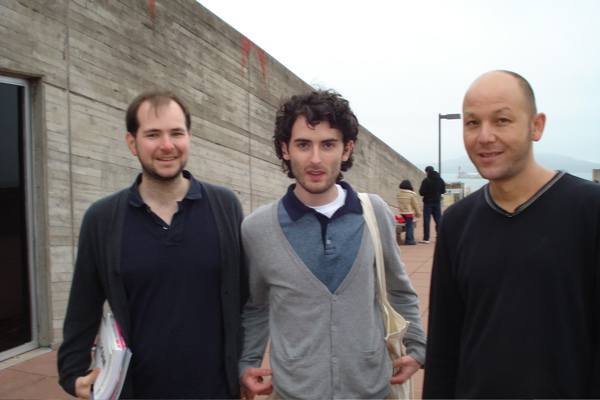 I don’t know how many of us showed up altogether, but there might have been 50 or 60, of all ages, even some young children, though no babies I don’t think. Previously Kota had prepared by isolating every one of the shots in the famous “Odessa Steps” sequence (often cited as the classic example of pure montage)—I think he counted 154, and then he screen captured the very first frame of each shot, and it was these 154 individual frames that he and his assistants set out to duplicate. 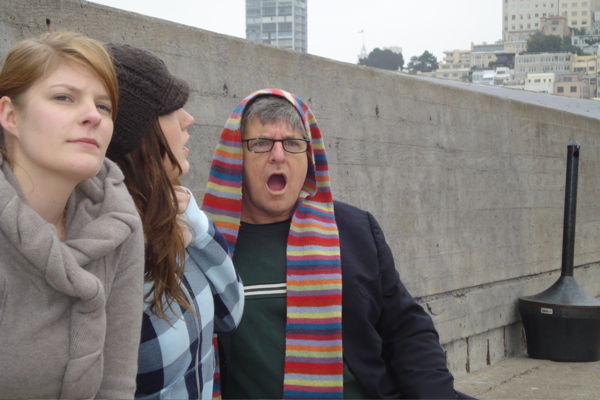 Me and other members of the proletariat, reacting to the oncoming riflemen

He announced that they were going to try for a Dogme style, like Lars von Trier, so that only indigenous props would be used. Thus instead of the baby carriage, that starts tottering down the steps once the mother of the baby has been shot down, he would substitute a wheelbarrow he found in one of the SFAI gardening shed. Similarly, instead of rifles and bayonets, the “Cossacks” aimed hoes and rakes at their victims. We were all told to come dressed as we ordinarily do. I think I had the only actual props. One pair of glasses, those ordinary reading glasses you can get at Walgreens, and then a second pair which Kota had hammered to shatter the right lens, for after my defeat. 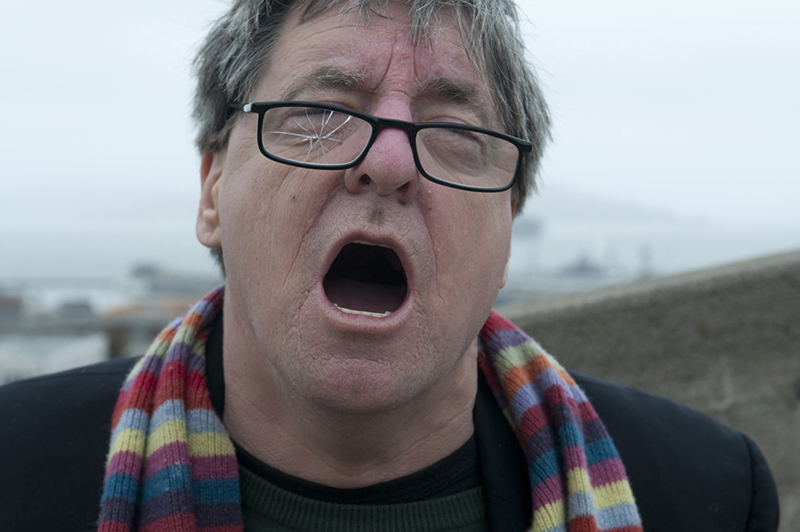 Where did he get all these people from? I recognized a few: students, curators, fellow artists, photographers, painters, film and video people, scholars, collectors, and one or two poets, like me and Colin Herd. And the photographers and stylists who worked under Kota’s direction: Kelli Yon, Kristina Willemse, Maizie Gilbert.  There was a crew table where we assembled between shots, but the Eisenstein original was all about crowds, crowds gathering in fear, crowds attempting to fight back, running for their lives, falling down like sardines onto the stone steps, crowds of corpses, so practically everyone was in every scene all the time. The girl who was the mother of the baby—and me of course, as the heroic yet misguided voice of the proletariat—had a different status, and I tried to stay in character but it was too painful! Now I know how Daniel Day Lewis must feel on the set of one of his films. “Don’t call me Mr. Day Lewis, call me My Left Foot!” 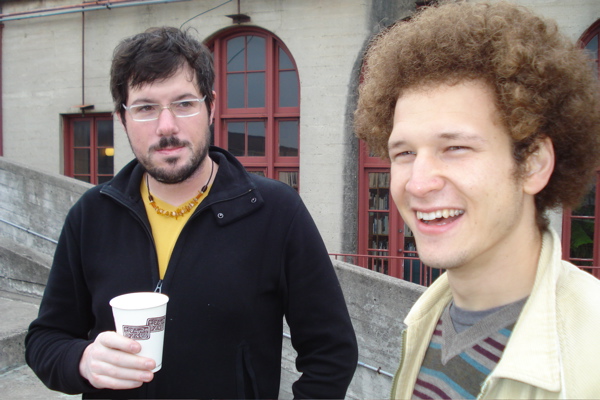 Mmm, they had some good food there too! For breakfast all sorts of pastries, for lunch pizzas, lots of little things to nibble on. “I want to write about this for the SF MOMA blog,” I said between takes. “But I won’t if it’s some sort of secret, Kota.” He scratched the top of his head and blinked. “Oh go right ahead,” he replied. “It’s no secret. In fact it’s the opposite of a secret.” 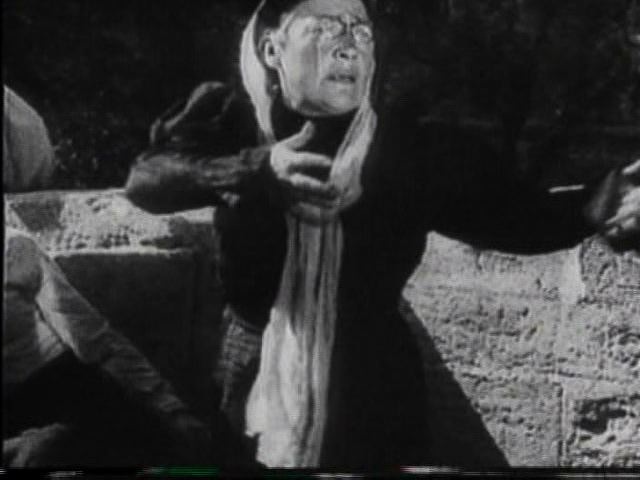 Eisenstein original. The “opposite of a secret.”