Over the weekend I finally got over to Gallery 16 to see the last week of Bruno Fazzolari’s exhibition Cold Turkey, a selection of drawings broken up by six recent paintings. This is the last week you can see it, so get down there if you can. As you probably know, the Gallery is only a few blocks from SF MOMA, at Bryant and Third, and if you haven’t been there it is one of the pleasantest places I know with always plenty to see. This time around Fazzolari‘s show is a winner indeed. 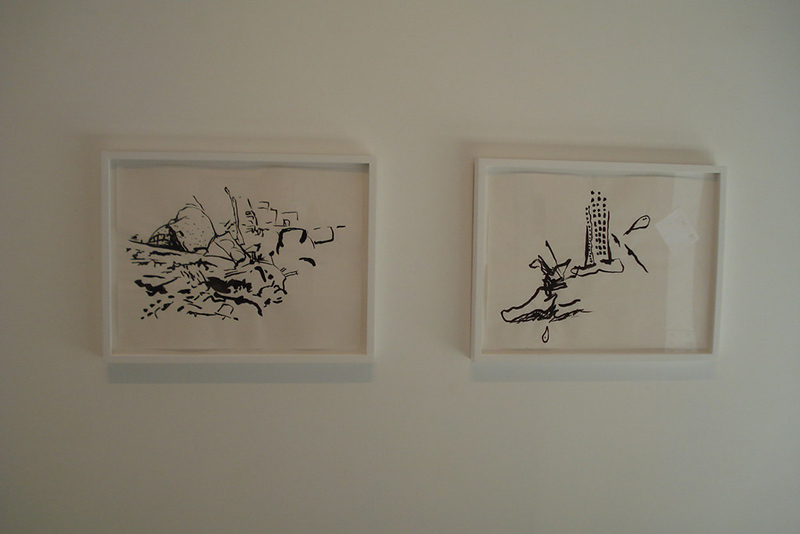 The drawings come from a series called “Six Realms” on which the artist has been working for many years; apparently there are dozens of them. I took the traditional gallery walk, with a map in my hand of what I was seeing, and proceeded from left to right, an arrangement that usually adds no meaning, only the comfort of habit.  This time around however, I convinced myself I was catching something happening in those drawings, that I was seeing them progress from simple gestures towards more complex renditions of the social world. From the self — even the self of the young child — to perhaps the loss of that self within the increasingly organized and globalized state. I looked again — made the circle one more time — and by George, I was so pleased with myself! 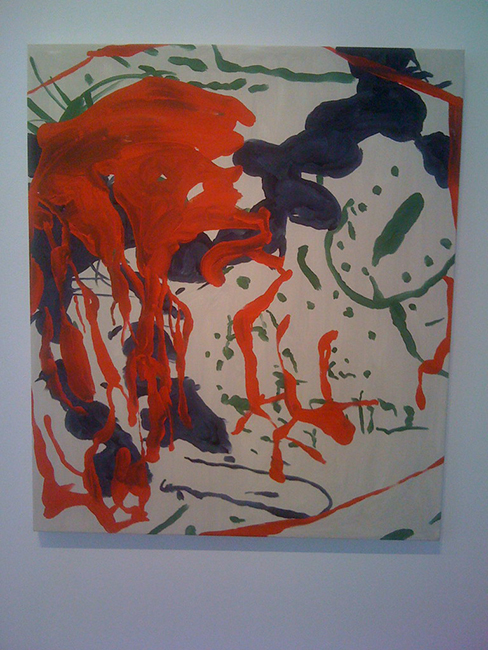 Nowhere did I manage to agree with even a single word of Kenneth Baker’s review — but wait. I can imagine a few of my readers don’t know who Baker is, but he is the highly respected art writer for the San Francisco Chronicle.  He’s been at his post so long that when I first came to San Francisco and I was gullible, someone told me, and I believed it for a time, that he was the man they named the phrase “a baker’s dozen” after. (Boy did I feel like a fool when I told someone that, and they proved that the phrase was established in, I don’t know, the era of Chaucer!)  Cold Turkey seems to have flickered simultaneous off and on switches in Ken Baker. Like Gerald Manley Hopkins or someone, Baker is nearly impossible to summarize, but you can read for yourself the review that made me so curious. The particular picture that gives KB so much trouble, “Griefly Thurible” (2009) is, for my money, utterly convincing and never brought late Guston to my mind, but to get there I would really have to have more art training I suppose. If the work in the show is guilty of too much “sophistication,” I, suspiciously, tend to embrace it.

What does the title mean? I asked Fazzolari. “Cold Turkey,” he explains, “is a phrase which has been on my mind for awhile–I like phrases which slip away from their literal referents, but double back on them. Several other reasons why: It refers back to my food work (which I don’t do anymore); to the free-fall of the economy; to the fact that it’s my first show in 8 years; to a state of naked awareness–bracing perception without crutches–before you recognize/decide what you’re seeing. Then I asked him if he had heard about the new movie coming out by the makers of Borat. It’s called Bruno, and I suggested it would give his name new currency. His face grew dark with fear, then he lightened up. “Growing up in Tucson, Arizona, with a name like Bruno was a challenge,” he laughed. “And just when I’d outgrown the taunts now here comes Sacha Baron Cohen to finish me off.” 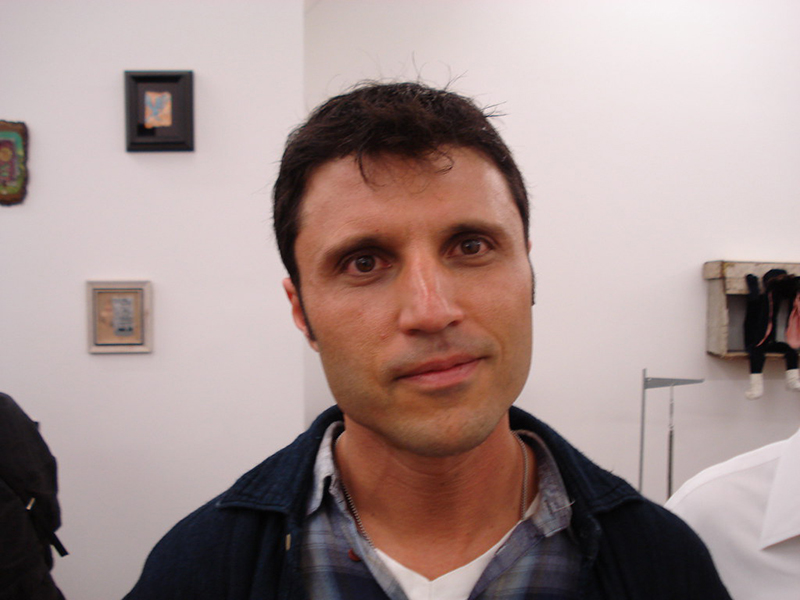 Across town Right Window (992 Valencia. at 21st) was opening “The Analog Hole (Or “Abundance”)” the first San Francisco show for Chicago-based conceptualist John Neff. Right Window is a collectively operated gallery in the Mission; eleven of us, curators, artists, writers and amateurs, rent out a storefront window every month from ATA and then once a year each of us gets to have his or her own show. Most of the “shows” are designed to look good from the street, as the gallery space is limited and also because there’s nobody to really sit the gallery.  We have a kind of hit and miss track record but if you are working under the radar you can sometimes get away with plenty! 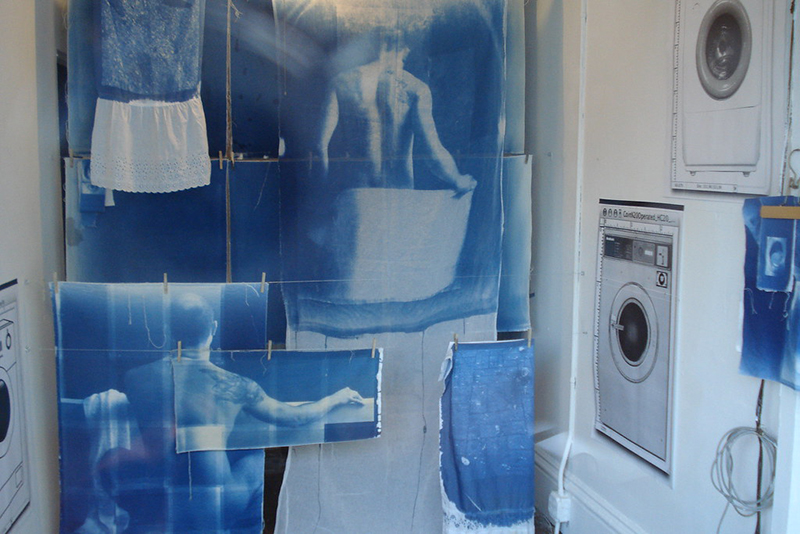 “The Analog Hole” (installation view with nose pressed up to window)

Curator Cassie Riger has given John Neff the go=ahead to turn a simple windowfront space into what looks to the casual passerby like a laundromat, an enticingly cyan space of pristine washers and carefully folded cloths.  The elevated floor is dotted with precisely placed clothespins, quarters, pairs of rolled socks.  But in a sort of Robert Gober substitution, the socks aren’t really socks, they’re plaster molds of pre-existing rolled socks, with that same appetizing yellowed sock look. 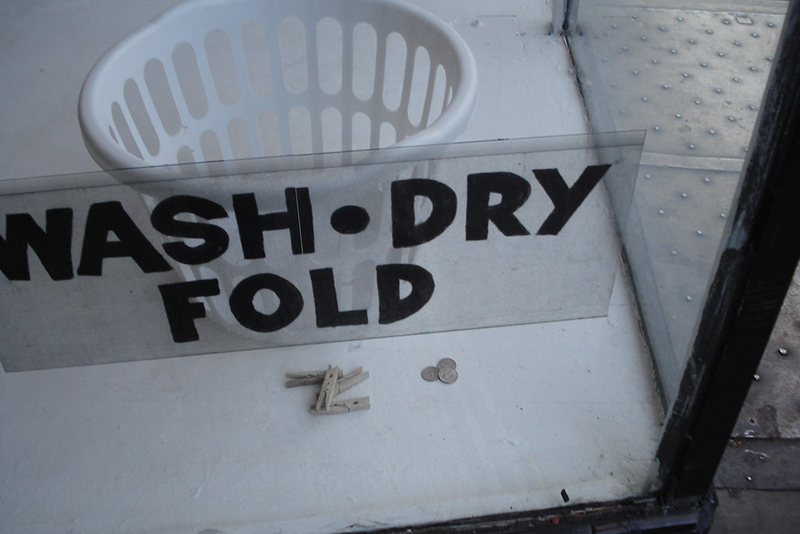 Despite the Marian blue, a sexual sizzle lifts off the floor of this “Wash Fold Dry” emporium: I had never really realized how sexual downloaded schema of standard industrial washing machines might look taped to a white wall.  But yes, they’re all about holes, baskets, suds and heat so why not.  Neff has a fascination for the nude male body and it shows.  “Who is that?” I asked casually.  “Is that you?” I asked him, but a covert glance at the artist’s backside convinced me that his model was somebody else entirely.  Turned out it was his boyfriend, too shy to show his face but always ready to drop his pants and show off what looks like a lean torso entirely dipped in blue.  Yet for all its seductions, Neff’s work has something scary and distancing about it, not a threat, I suppose, but a reminder of the price we pay to remain so clean. 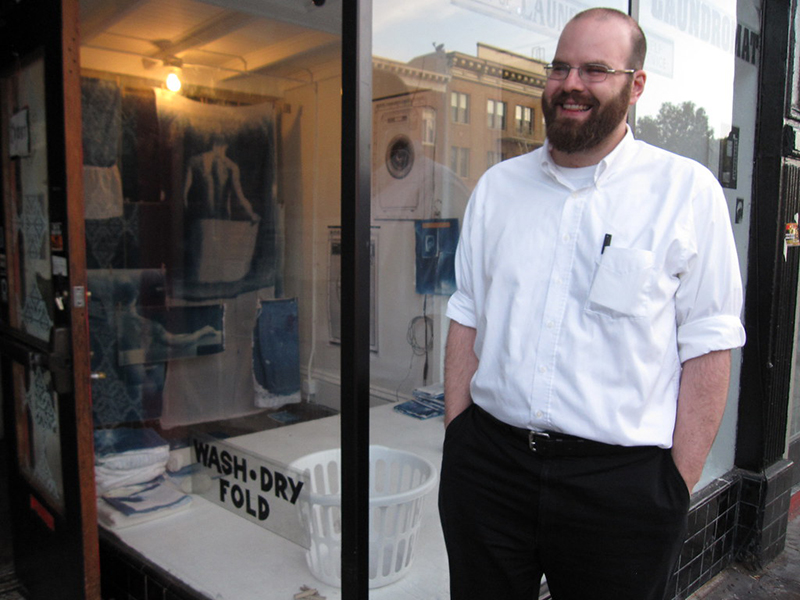