One on One: Joseph Becker on Otl Aicher

Alongside our new curator “One on One” talks, we’re doing regular ‘one on one’ blog posts, from curators, staff, and public, on a particular work or exhibition they’re interested in. Today’s post is from Joseph Becker, assistant curator of architecture and design. 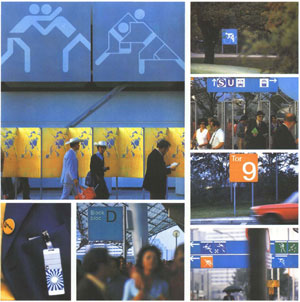 A preeminent figure in graphic design history, Otl Aicher’s identity for the 1972 Munich Olympics remains a seminal project on which much of contemporary identity and branding design has been based. On view in SFMOMA’s Architecture and Design gallery is a selection of the studio’s Olympic graphic work: a sampling of Aicher’s playful color palettes and distilled sports imagery set within carefully calculated grid layouts and strict structural hierarchy. Aicher understood the need for a universally comprehensible set of graphics for the games, and this dictated many design decisions, leading to the creation of a new visual language. Perhaps the most recognizable component of Aicher’s design—the pictogram system developed for the sporting events—was later expanded upon to become an international system of symbols and icons.

With the Olympics, the studio employed a concept that held graphic design as a platform for communication and social interaction, beyond aesthetics and into experience. From the architectural signage, to the uniforms of the official Olympic staff, from the sporting event tickets to the public advertisement posters, each piece was carefully crafted to be part of the bigger picture. Aicher’s philosophy of a unified aesthetic that could be implemented for virtually every component of the games was based in ideas of interpretation and resonance. The design was as much about the entire visual experience—the cohesiveness of the Olympic identity—as it was about the individual artifact. 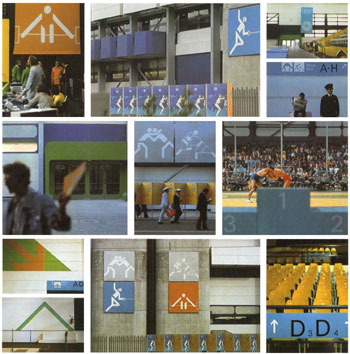 Some of my interests in the progression of graphic design are explored here. Aicher capitalizes on the essence of graphics — of visual language — as communication. He freely moves beyond the typically 2D world of posters and print, and begins to assimilate his playful and colorful designs into part of the architecture of the Olympic Village. He sees the poster not just as a single unit, but explores how it works in multiple, and what it means in, say, an assembly which follows the line of the sidewalk. Here, graphic design is more than graphics. Aicher even specifies which flowers should be planted where, so that the colors compliment the signage of certain arenas, and what typeface the scoreboards should use so as to coordinate and fit into the larger scheme. The notion of branding—of each piece working together to resonate with the viewer—is prevalent.

Please join me in the Atrium on May 7th at 6:30 pm to hear more about Otl Aicher and the Munich Olympics.